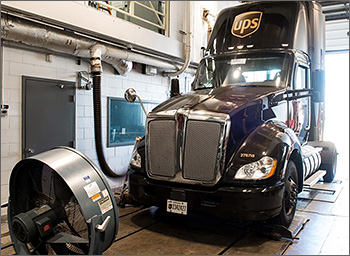 NREL is evaluating the economic and emissions impact of renewable diesel fuel use in medium- and heavy-duty vehicles operated by UPS.
Photo by Dennis Schroeder, NREL

In partnership with the United Parcel Service and Clean Cities' National Clean Fleets Partnership, NREL compared the fuel economy and emissions impact of renewable diesel versus petroleum diesel in fleet vehicles operated by UPS, one of the world's largest users of renewable diesel.

Produced by Solazyme, the renewable diesel is an algae-derived drop-in alternative to standard petroleum diesel and does not require any vehicle modifications. The fuel meets the ASTM D975 standard specifications for diesel fuels.

To gather real-world operational data, NREL instrumented 12 vehicles six package-delivery vans and six regional tractors operated by UPS out of its Houston, Texas, hub. Based on the field data, NREL selected representative drive cycles for chassis dynamometer evaluation at the Renewable Fuels and Lubricants Laboratory to determine the fuel economy and emissions impact of renewable versus conventional diesel in a controlled setting.

Results indicate that, on average, renewable diesel reduces carbon dioxide emissions by 4.2% compared to petroleum diesel. This is a function of the higher mass-based heating value and lower carbon-to-hydrogen ratio of the renewable diesel, which is typical of many synthetic diesel fuels. Fuel consumption and economy trended strongly with mass- and volume-based heating values, respectively, leaving the engine thermal efficiency unchanged for a given cycle.

For more information about this evaluation, refer to the Economy and Emissions Impacts from Solazyme Fuel in UPS Delivery Vehicles report.

Be the first to know about the latest NREL sustainable transportation and mobility news, including research projects, partnerships, data and tool launches, and publications. See an example before you sign up.