NREL is developing new ways for geothermal resources to be used—such as in the recovery of critical minerals, for energy storage, and for direct heat.

The Earth's heat can be used for more than electricity. In fact, geothermal heat has been used directly for everything from greenhouses to breweries. NREL is helping to advance geothermal science and technology every step of the way.

Earth's naturally occurring heat exists everywhere beneath the surface, and it has been used for centuries for everything from cooking to space heating. NREL researchers are developing new, innovative ways to incorporate this heat into everyday uses and industrial process—such as for desalination of sea water and turbine inlet cooling. We apply our analysis capabilities to reduce costs and barriers to deployment to increase use of this low-carbon resource

NREL researchers are working to improve the characterization and proliferation of geothermal heat pumps (GHP) technologies through techno-economic analysis, market modeling, and barriers analysis. GHPs, also referred to as ground-source heat pumps or geo-exchange, can reduce energy use, carbon emissions, and peak electricity demand in buildings while satisfying space heating, space cooling, and domestic water heating needs. A GHP system is composed of a ground heat exchanger, one or more water-source heat pumps, and systems for air and water distribution.

GHPs use the thermal mass in the shallow subsurface of the ground as the heat sink/source for heat pump operation. The ground temperature at about 30 ft below the surface at a given location is constant. This undisturbed ground temperature differs by location, but it typically ranges from 40°F to 70°F in the United States. The small difference between ground temperature and desired room temperature (around 70°F) makes GHPs very energy efficient for space cooling and heating as well as water heating. Thus, GHP systems are among the most widespread green technologies for heating and cooling buildings.

Mineral extraction from geothermal brines and produced waters offers a secure, strategic, domestic source of lithium and other minerals needed for electric vehicles and other end-use applications. In addition, valorization of minerals in hypersaline brines produced from seawater desalination can decrease freshwater cost, which will become more important as desalination becomes more common to address water scarcity in a warming climate. NREL researchers investigate the geochemistry of these brines, the global supply chain of critical minerals, and the techno-economics of recovery using different processes to develop novel technologies to exploit unconventional resources.

As more intermittent renewable energy sources, such as wind and solar, are added to the electric grid, more dispatchable power sources are required to closely follow electric load to maintain grid stability. Geothermal energy, which consistently produces power independent of time of day or weather conditions, can provide this dispatchability.

NREL partnered with Idaho National Laboratory, the University of Utah, and two private companies to study the feasibility of coupling a geothermal power plant with a concentrating solar power system to create a hybrid system that operates more efficiently and economically while adjusting to fluctuations in demand. The project investigated the storage of heat from a concentrating solar power system in a subsurface geologic reservoir. Solar heat increases the water temperature in the reservoir, which enhances geothermal power plant performance and efficiency. Learn more in "Using Concentrating Solar Power To Create a Geological Thermal Energy Reservoir for Seasonal Storage and Flexible Power Plant Operation" in the Journal of Energy Resources Technology.

This project provides a unique pathway for increasing the grid penetration of renewable energy in large blocks of power and across many states and helps meet flexible energy needs while improving grid stability and reliability.

dGeo leverages a high-resolution geospatial database and a robust modeling framework based on other distributed generation market demand models, such as NREL's dSolar model. Its geothermal heat pump module relies on unique datasets of varying geospatial resolution—such as thermal site energy consumption and demand by county and estimates of ground thermal conductivity by census division—to model the techno-economic performance of heat pump systems. This level of spatial granularity allows users to determine the feasibility of adoption for a given region.

Within the GeoVision study, the dGeo model was used to assess opportunities for geothermal heat pumps under a scenario analysis framework. Two scenarios were developed to better characterize the potential market in the United States: a business-as-usual scenario and a breakthrough scenario. In both scenarios, the model demonstrated a thriving market in the United States, with more than 174 gigawatts-thermal of total potential by 2050 in the breakthrough scenario. Much of the economic potential is concentrated in the Northeast and Midwest, with New York, Pennsylvania, Illinois, Ohio, and Michigan—states with more expensive heating fuels—showing the highest potential.

The GeoVision analysis concluded the market potential for geothermal heat pumps is more than 14 times larger than existing capacity. This potential could translate to heating and cooling for about 28 million U.S. homes.

NREL is investing in the development of a novel simulated moving bed approach to improving mineral recovery from geothermal brines to reduce the cost of seawater desalination. The simulated moving bed approach will be used in combination with new zwitterionic ion exchange materials that chromatograph whole salts and are regenerated with warm fresh water. This eliminates the need for external chemicals such as mineral acids, creating a first-of-a-kind mineral recovery technology. Importantly, zwitterionic resins in a simulated moving bed system will separate salts not only from water but also from one another. This allows simultaneous mineral separation of multiple high-value coproduct streams from geothermal brine, creating additional revenue. Cost of goods analysis, coupled with known values of moving bed performance, indicates that fresh water could be sold at less than $0.10/m3 while generating a coproduct stream of magnesium chloride and maintaining the same level of profitability as conventional reverse osmosis technology.

This work will produce economic, simultaneous separation of high-value salts from geothermal brines at commercial scales and high temperatures.

NREL works with industry partners to design and model widespread, cost-effective, and grid-friendly geothermal operations that will lower the cost of geothermal deployment. NREL's geothermal capabilities run the gamut from exploration to operations and from techno-economics to regulations and permitting. Learn more about these capabilities: 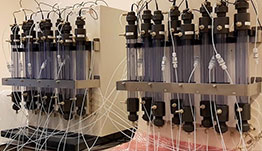 NREL is developing new, energy-efficient technologies that will address the challenges of mineral separation. 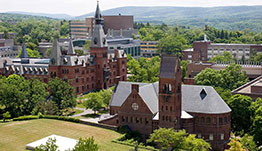