NREL is advancing research to access geothermal heat anywhere in the world—even where fractures and fluid do not naturally exist.

Traditional hydrothermal systems are found in places with three key ingredients: heat, natural fractures, and fluid. The natural fractures and fluid bring the heat to the surface, but they exist in only point locations throughout the world. Unconventional geothermal systems, in contrast, use engineered reservoirs to provide geothermal power from resources once considered unrecoverable because of their lack of water, location, or rock type.

NREL's expertise in geothermal research and development, techno-economic modeling, data management and communications, and site operations is contributing to the advancement and commercial-scale deployment of advanced geothermal systems (AGSs). An AGS uses one or more wells drilled into hot rock with fluid circulating through a closed-loop system to bring heat to the surface for direct heating and electricity applications. Several AGS designs have been proposed based on different geometries, heat transfer fluids, and physics principles.

AGS is attractive because:

Characterizing the subsurface is a challenging but critical step in developing an EGS. Accurate, in-situ characterizations of EGS allow for optimization of fracture networks and strategic development and operational decisions.

Geothermal and Oil and Gas

NREL experts are working to use renewable resources in combination with fossil energy. Geothermal and oil and gas hybrid systems make use of wells already drilled by oil and gas developers. Using geothermal fluids from these wells for power production can extend the economic life of the wells, deliver near-term energy savings, and reduce greenhouse gas emissions.

Hot sedimentary basins throughout the U.S. have the potential to provide heat for direct use and, in some hotter basins, even for electricity. Because of extensive oil and gas development in many of these systems, their reservoir properties are often well characterized. NREL’s resource assessments have identified significant potential in various basins and geopressured areas throughout the U.S.  As highlighted in the 2019 GeoVision study, these resources could provide as much as 7.5 million GWh of heat.

NREL researchers have developed tools and models to simulate various types of AGSs and assess their technical and economic performance for different subsurface, surface, and operating conditions. One such tool is the Slender-Body Theory Reservoir Heat Transfer Simulator (SBT-RHT Simulator). This model is based on the computationally fast slender-body theory, can handle multiple thermally interacting subsurface closed-loop heat exchangers with any geometry, and has been validated against finite element simulations.

The key benefit of this simulator is its ability to perform transient simulations over the reservoir lifetime (e.g., 20–30 years) in a matter of seconds, which allows scientists to quickly evaluate designs and conditions using a Monte Carlo-type approach. Although computationally fast, this simulator does have limitations. It does not account for geomechanical effects, requires uniform and homogenous rock properties, and has limited ability to simulate coupled reservoir fluid convection. But high-performing geometries can be modeled using more complex reservoir modeling tools.

If successfully developed and proven capable of cost-competitive heat extraction at demonstration sites, AGSs could allow for safe, reliable, and scalable subsurface heat extraction anywhere in the world—resulting in new geothermal deployments worldwide.

The EGS Collab project, funded by the U.S. Department of Energy and managed by Lawrence Berkeley National Laboratory, seeks to improve understanding of EGSs by studying stimulations in crystalline rock at a 10-m-scale testbed. The Experiment 1 testbed consists of a hydraulically stimulated fracture that intersects several natural fractures and is located at the 4850 level (approximately 1.5 km depth) of the Sanford Underground Research Facility in Lead, South Dakota. One producer and one injector intersect the hydraulic fracture, and six observation wells equipped with sensors allow for real-time monitoring of temperature, seismicity, electrical resistivity, and other parameters. Research focused on interpreting the tracer and thermal response measured within the production well.

Researchers applied analytical and numerical tools to tracer and thermal tests to characterize flow paths at the EGS Collab Experiment 1 testbed. This work contributes to a rigorous and reproducible EGS characterization approach.

NREL analyses have highlighted the potential for coproduction of geothermal with oil and gas, and demonstration sites such as the Rocky Mountain Oilfield Testing Center have also shown this potential. An Estimate of the Near-Term Electricity Generation Potential of Coproduced Water from Active Oil and Gas Wells concludes that up to 362 MW of electricity could be produced with 2012 technology and produced water flow rates. That number has likely increased as power plant technology has advanced and U.S. oil and gas production has increased significantly. However, there are substantial data gaps in the reported amounts and temperatures of water produced from oil and gas wells. Considering the potential, an updated and more in-depth study is warranted.

Additional NREL research into manufacturing and supply chain analyses has shown that widespread manufacturing of small power units could make this type of application more economic. Global Value Chain and Manufacturing Analysis on Geothermal Power Plant Turbines posits that instead of manufacturing fit-to-purpose power units, producing a smaller number of standard designs at larger volumes could decrease costs by up to 60%.

The most attractive geothermal resources have high temperature gradients, low drilling costs, and reservoir permeabilities greater than 10 millidarcies. In An Estimate of the Geothermal Energy Resource in the Major Sedimentary Basins in the United States, NREL researchers estimated the recoverable geothermal from 15 major known sedimentary basins. Prospects, in order of favorability, in Nevada, Utah, Texas, and Colorado exhibit attractive reservoir characteristics and were chosen for further analysis. Resources in Wyoming and Louisiana exhibit lower geothermal gradients and were not evaluated. Reservoir modeling and techno-economic analysis were performed at Mary’s River Basin–North in Nevada.

NREL works with industry partners to design and model cost-effective, grid-friendly geothermal power plants that enable the deployment of geothermal across the United States. NREL's geothermal capabilities run the gamut from analysis to downhole tools and sensors and from reservoir modeling to full-scale field research validation. Learn more about these Geothermal Anywhere capabilities: 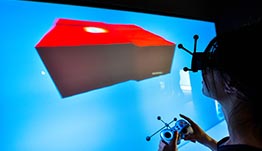 Our reservoir modeling team uses modeling tools for 3-D static (structural) and dynamic (numerical) simulation, including thermal, hydrological, mechanical, and chemical properties. We engage our high-performance computing system to gain insights into the subsurface from well targeting to reservoir operations and from optimization to design of unconventional geothermal systems. 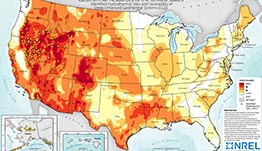 We produce high-resolution maps of worldwide geothermal resource potential as well as a national mapping interface, the Geothermal Prospector, to interact with geospatial datasets useful for geothermal development. NREL researchers are also advancing resource characterizations for temperature at depth and EGS potential.