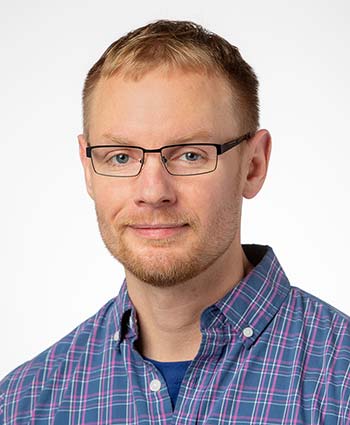 I am a scientist at the National Renewable Energy Laboratory (NREL) and have an interdisciplinary background and training. My research encompasses many aspects of bioenergy and biomaterials science. Biomass is an abundant, renewable resource that is naturally and continually mass-produced on this planet. Humans have been using biomass as source of fuel and materials for as long as they have existed. My research aims to improve ways by which biomass can be used as a sustainable and renewable source of fuels, chemicals, and materials.

Microscopy is an important and powerful tool for investigating the spatial distribution of mass. While microscopy has often been considered to provide predominantly qualitative information, microscopy data may be subject to rigorous quantitative analysis, as would any other experimental technique. Shown below are examples of images of various samples at scales of different length using several different imaging techniques. 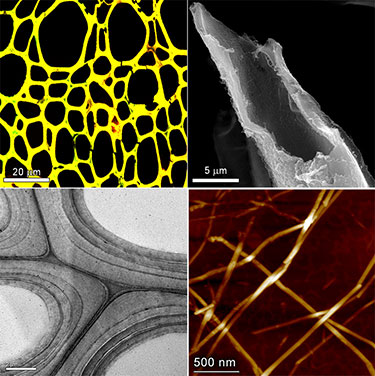 Perhaps the most powerful tool for nanostructural characterization is 3-D electron tomography. I learned this from technique from Bryon Donohoe, who is a great microscopist at NREL. Recently, we used this technique to visualize and model the nanostructure of thermochemically treated biomass. Below is one of the tomograms that resulted from this study, visualized by panning through the volume in the z dimension. The scale bar is 200 nm. (This is one of my favorite tomograms because it really shows the fibrous structure of the cellulose in the wall.)

I developed some novel quantitative analysis methods, implemented in MATLAB, to discern the longitudinal geometry of cellulose microfibrils within the tomographic data and used the results to construct and evaluate atomic models for the cellulose microfibrils (Ciesielski et al., ACS Nano, 2013). A movie visualizing how these macromolecular models are built from the unit cell of a 36-chain cellulose fibril is shown below.

Construction of atomic models of cellulose nanofibrils along an arbitrary space curve. This movie visualizes how the unit cell of a cellulose crystal may be used to build atomic models of cellulose fibrils with an arbitrary longitudinal axis. In this model, the Frenet-Seret frame of the space curve is used to orient the unit cell to align the 100-crystallographic direction with the unit normal vector.

Examples of atomic models of cellulose constructed in this manner are shown below. (Atomic models are shown as blue and black spheres; the measured tomographic density is shown as the semi-transparent light brown isosurface.) 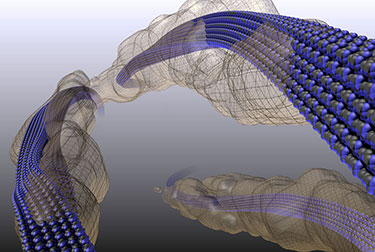 We are also developing methods to model the higher-order architecture of biomass and plant cell walls. I use a few different tools to do this, all of which employ Constructive Solid Geometry (CSG) in some way. Plant cell walls provide an interesting example of mesostructure, wherein the assembly of cellulose nanofibrils and other biopolymers form a robust composite with excellent mechanical properties.

Below is an image of one of the first 3-D cell wall mesostructure models I constructed. This was built and visualized with POVRay. This model was basically just for visualization but still employed a CSG algorithm to produce the model based on quantitative parameters that described the composition and geometry of the components. 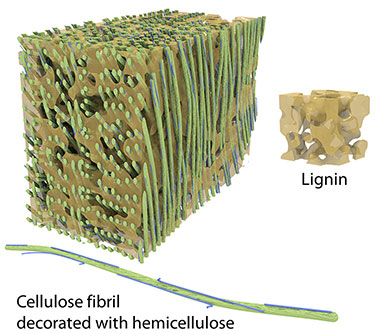 3-D model of cell wall mesostructure. This is a visualization of a rectangular chunk of a lignocellulosic cell wall. All the parameters that dictate the structure of the model, such as nanofribril spacing, curvature, hemicellulose decoration, lignin porosity, etc., are variables in the model construction algorithm.

Recently we have extended the CSG algorithm to produce density field models of lignocellulose that can be evaluated with finite element simulations. Currently we are performing simulations of structural mechanics and transport phenomena with these models to investigate how variations in the structure and composition of lignocellulose impacts its functionality in scenarios relevant to biomass conversion processes. Below is a movie that visualizes a density field model for lignocellulose mesostructure.

The microstructure of biomass is also an important feature that has a big impact on bulk properties and that can vary substantially among plant species. We use multimodal imaging and quantitative image analysis to measure geometric parameters that specify the microstructure of biomass, including cell wall thickness, cell lumen diameter, and spatial arrangement and frequency of various cell types. I wrote a CSG algorithm to take these parameters, along with others that describe the size and shape of the whole particle, and produced a 3-D model. These methods were published recently (Ciesielski, et. al., Energy & Fuels, 2015). These were the first biomass particle models to incorporate explicit, species-specific microstructure. Examples of these models are shown in the movie below.

Biomass particles used as feedstocks for both thermochemical and biochemical conversion processes retain the microstructural anatomy of the plant of origin, which varies substantially among species. Furthermore, when biomass is milled prior to conversion, a distribution of particle sizes is produced. Both of these factors can have a significant impact on intra-particle transport phenomena (i.e., transfer of heat, mass, and momentum), which are critical processes that affect the observed rates of catalytic conversion processes.

The vast majority of biomass particle models present in the literature make many simplifying assumptions about the geometry of the particles. While these "low order" models are sometimes sufficient to fit data from a specific experiment, reactor, or feedstock, they are of little value for predicting the behavior of different feedstocks or feedstock blends in arbitratry reactors and operating conditions. We are developing methods to produce more realistic, species-specific particle models that predict how a given biomass feedstock or feedstock blend will perform in various conversion processes. Examples of these models are shown in the figure below, alongside SEM micrographs of real biomass particles that the models are intended to represent. These models are used in multiphysics, finite element simulations of transport phenomena coupled to chemical conversion kinetics to investigate the behavior of these particles in various simulations. An example of a meshed particle model is shown in the middle row of the figure below. Since this effort focuses on modeling the biomass rather than a specific reactor or process, these structural models are relevant to any process that takes biomass as a feedstock. The bottom row of the figure below shows example snapshots from simulations of conjugate heat transfer, showing slower heating behavior of a hardwood particle compared to a softwood particle of the same size due to differences in microstructure. All of the images in this figure were adapted from Ciesielski, et al., Energy & Fuels, 2015. 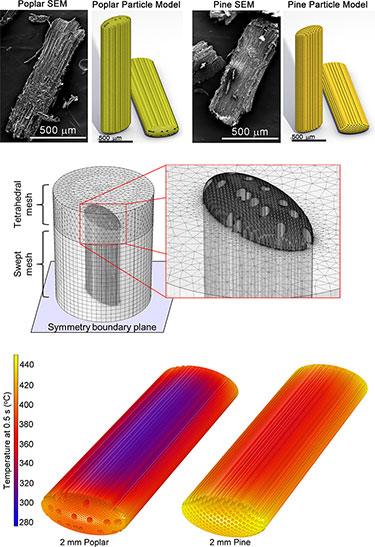 I am also starting to apply similar techniques to model transport phenomena and reaction kinetics within structured catalysts. The figure below illustrates how a transmission electron micrograph of a zeolite catalyst particle, which is an agglomerate of many small zeolite crystallites, may be used to generate geometry for a finite element simulation.

These geometries are used to simulate transport and chemical transformations of reactants and products during catalytic upgrading. The movie below shows the localized product formation predicted by such a simulation. Notice how the product concentration builds inside the catalyst particle due to mass transport limitations.

This subject has been a long-time research interest of mine, which is to say that I have been very interested in molecular dynamics simulations performed by other researchers. I have recently begun to write some of my own MD simulations, with much help and guidance from Michael Crowley, who is a CHARMM developer and fantastic scientist here at NREL. Below is a movie from one of my first MD simulations, showing the relaxation of a curved cellulose nanofibril. This simulation was written in CHARMM and visualized with Pymol.

Molecular dynamics simulation of a cellulose nanofibril relaxing from a strained configuration.

Production and Applications of Nanocellulose and Glycomaterials

Nanocellulose is an impressive class of renewable materials with outstanding properties and incredible potential in many applications including advanced polymer composites, films and foams, biomedical and biocompatible materials, and green electronics and photonics. These materials are derivatives of cellulose naturally synthesized by plants (though cellulosic nanomaterials can also be produced from bacterial and algal sources). Because the energy to produce these materials comes from sunlight and the carbon comes from CO2 (in the case of plant and algal sources), they are an excellent energy-efficient and sustainable alternative to many non-renewable and/or environmentally detrimental petroleum-derived materials. We are investigating ways to co-produce nanocellulose and biofuels in a format compatible with lignocellulosic (2nd generation) biorefinery technology. We are also pursuing a variety of end-use applications for nanocellulose and other plant-derived glycopolymeric materials. 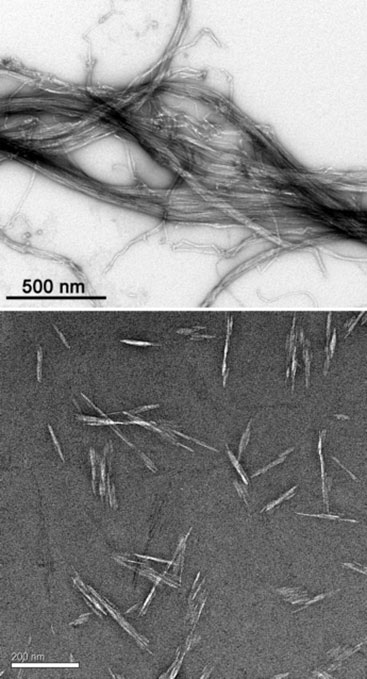 I spend a lot of time generating figures and schematics to visualize scientific data and concepts, mostly for publications in journals and reports. High-quality visualization is both an art and a science. I don't have any official training in this area, but I have learned to use some pretty nice visualization software like POVRay, Blender, and Pymol. I've included a few of my favorite images here. One of the best things about a lot of the structures and models visualized here is that they are more than just pictures; they are actually functional models that can be evaluated in computational environments. 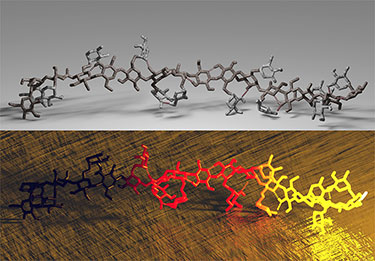 Hemicellulose Molecular Models. These are molecular models built in CHARMM by Michael Crowley at NREL, rendered by Peter Ciesielski in POVRay. The top image uses several different stone textures, and the bottom image uses emission media to make the molecule appear as if it just came out of a forge and is starting to cool. 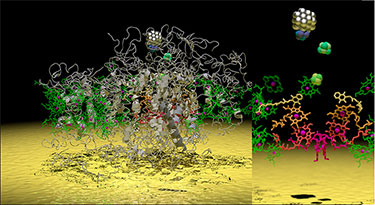 Platinized Photosystem I on a Gold Surface. This is a visualization of the molecular structure of Photosystem I (one of the incredibly important proteins that participates in the light reactions of photosynthesis), which has a platinum nanocluster sitting on its terminal electron donor site. Some artistic license was taken for the platinum cluster, but the atomic structure of PSI was obtained by X-ray crystallography by Amunts, et al. The right panel shows a zoom view of the electron transfer chain with the protein scaffolding hidden. What an awesome nanomachine! Some version of this figure with additional annotation will appear in a book chapter soon. I will link to it when it's available. This figure was generated using Pymol and POVRay. 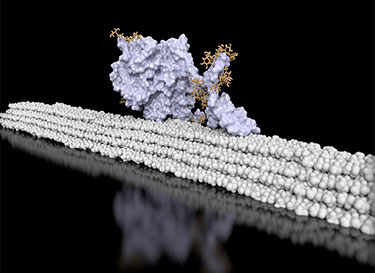 Cel7A (or CBH1, if you prefer) on cellulose fibril. This image was created from a snapshot of a molecular dynamics simulation written by Gregg Beckham to investigate interactions between this cellulase enzyme and its cellulose substrate. The figure was generated using Pymol and POVRay.

"Lignocellulose deconstruction in the biosphere," Current Opinion in Chemical Biology (2017)

"Understanding Trends in Autoignition of Biofuels: Homologous Series of Oxygenated C5 Molecules," The Journal of Physical Chemistry A (2017)

"Not Just Lumber—Using Wood in the Sustainable Future of Materials, Chemicals, and Fuels," Journal of Materials (2016)

"Influence of Crystal Allomorph and Crystallinity on the Products and Behavior of Cellulose during Fast Pyrolysis," ACS Sustainable Chemistry & Engineering (2016)

"Disruption of Mediator rescues the stunted growth of a lignin-deficient Arabidopsis mutant," Nature (2014)

"The Structure of the catalytic domain of a plant cellulose synthase and its assembly into dimers," The Plant Cell Online (2014)

"Hydrothermal catalytic processing of saturated and unsaturated fatty acids to hydrocarbons with glycerol for in situ hydrogen production," Green Chemistry (2014)

"Evaluation of clean fractionation pretreatment for the production of renewable fuels and chemicals from corn stover," ACS Sustainable Chemistry & Engineering (2014)

"Real-time monitoring of the deactivation of HZSM-5 during upgrading of pine pyrolysis vapors," Green Chemistry (2014)

"Kinetic model of the photocatalytic effect of a photosystem I monolayer on a planar electrode surface," J. Phys. Chem. A. (2011)

"Leaving their legacy: A research experience and teaching module to maximize STEM learning for students," The Science Teacher (2010)

"Rapid assembly of photosystem I monolayers on gold electrodes," Langmuir (2008)

"Photobiohybrid Solar Conversion with Metalloenzymes and Photosynthetic Reaction Centers," in Biotechnologies for Biofuel Production and Optimization (2016)

The images, graphics, and movies on this page were generated by Peter Ciesielski at NREL. If you wish to use these images, please contact Peter directly.