The degradation of cellulose by glycoside hydrolase enzymes has been studied more extensively than its biosynthesis, but important questions still remain. Cellobiohydrolases are cellulase enzymes that processively hydrolyze individual cellulose chains, producing cellobiose (a dimer of glucose). Cellobiohydrolases complete a "processive cycle" repeatedly before disengaging from the chain; this cycle includes several steps, which are extremely difficult to differentiate experimentally. We employ advanced molecular simulation tools to study each step individually (including the chemical reaction and cellulose processivity). For example, we study Trichoderma reesei Cel7A (see figure), the most prevalent component of industrial cellulase mixtures and an effective model system for studying processive cellulase enzymes. Taken together with past studies, our results shed light on rate-limiting steps in cellobiohydrolases, providing potential protein engineering targets.

As detailed in our group's recent Chemical Reviews article, we are keenly interested in developing and understanding structure-function relationships in enzymes important to the breakdown of biomass. These relationships can help to guide protein engineering efforts. Comparing cellobiohydrolases (CBHs) and endoglucanases (EGs) provides one example of this type of relationship (see figure). Generally speaking, the primary structural difference between a CBH and an EG is the loops that cover the enzymes active site. This structural difference has been shown to have a dramatic consequence for the function of these enzymes, including their processive ability (i.e., the number of bonds they hydrolyze before dissociating from a cellulose chain) and their probability of endo-initiation (i.e., hydrolyzing a bond in the interior of the cellulose chain, rather than at the chain end). In addition to T. reesei Cel7A (a CBH), also shown are Phanerochaete chrysosporium Cel7D (a CBH with less extensive loops than TrCel7A) and endoglucanases TrCel5A and TrCel12A. 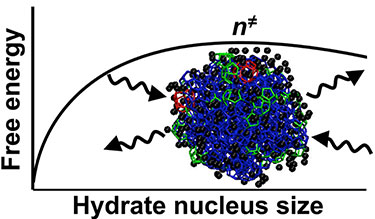 Clathrate hydrates are multi-component crystalline inclusion compounds of hydrogen-bonded water "cages" surrounding a hydrophobic guest molecule. Methane hydrates are a particularly important example, as they occur in vast natural reservoirs around the globe and have relevance to global climate trends, carbon dioxide sequestration, and gas storage and transportation. Perhaps most significantly, they can threaten oil and natural gas production by blocking pipelines and exacerbating oil-well blowouts. With collaborators at the Center for Hydrate Research at the Colorado School of Mines, we have utilized molecular simulation to investigate the molecular mechanism by which these compounds form. The figure shows a schematic representation of the nucleation of a hydrates nucleus. Red, green, and blue lines represent hydrogen bonds between water molecules in different types of cages surrounding methane molecules (black spheres).