The Solar Newsletter is an electronic newsletter that provides information on NREL's research and development of solar technologies. 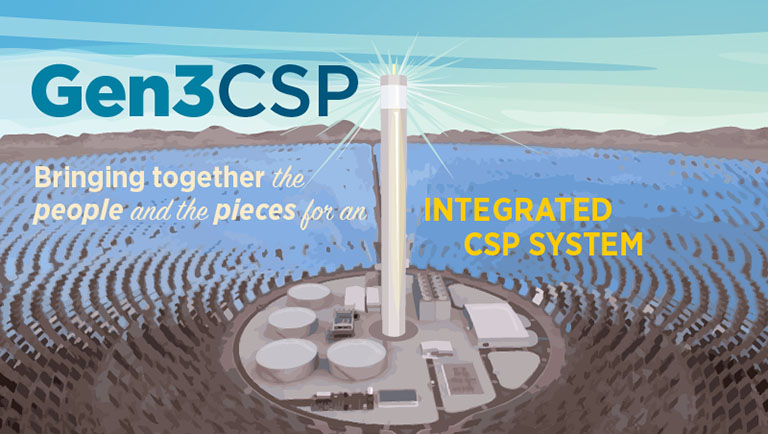 Today's best, commercially- available concentrating solar power (CSP) technologies can harness the sun's energy to heat working fluids to 565 °C. While these plants have driven significant reductions in the cost of CSP-generated electricity, CSP costs must continue to decline to keep pace with PV and other energy sources. A new U.S. Department of Energy research program aims to develop a commercial-scale, high-temperature CSP system with working temperatures of at least 700 °C, while also incorporating thermal energy storage.

Of the $72 million awarded by DOE for this program, NREL has received $7 million as one of three teams that are each exploring a different CSP technology pathway. The NREL team, led by CSP researcher Craig Turchi, will develop the next generation of liquid-phase CSP technology by advancing the current molten-salt power tower technologies to higher temperatures and efficiencies. The project will design, develop, and test a two-megawatt thermal system. If selected for the next phase of the program, the NREL team will receive an additional $25 million over the subsequent three years to develop a test facility. 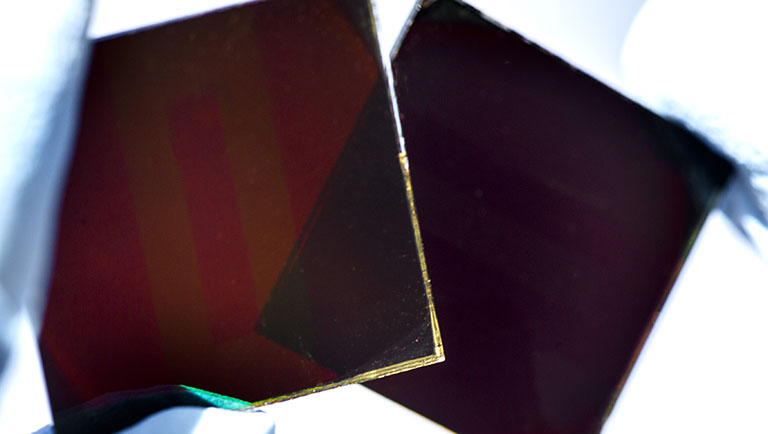 Over the years, NREL researchers have studied hundreds of thousands of samples in their quest to find useful inorganic materials for advanced energy applications, such as thin-film solar cells. Yet data on only a tiny fraction—the most promising or interesting materials—was ever published. Now, the newly launched High Throughput Experimental Materials (HTEM) Database offers information on more than 140,000 sample entries collected by NREL scientists. HTEM entries provide details on the structural, chemical, and optoelectronic properties of the materials and their synthesis conditions.

Much of the data in HTEM was gathered through NREL's combinatorial research, which produces materials with varied properties to maximize the output of new data. For example, a thin-film sample measuring 2 inches on each side can have 100 data points. How so? Because such a sample "library" is intentionally made with gradients in chemical composition, synthesis temperature, or film thickness. "Doing such combinatorial research systematically over many years, for different projects with different goals is what allowed us to create this database," said Andriy Zakutayev, a scientist who worked on the database. About half of the total dataset is already available online, where results can be searched by element, then visualized.

Solar Rubber Hits the Road in a new Innovation Network

In a new collaborative research initiative, NREL is bringing together teams from cities, states, companies, and non-profits across the country to understand how solar can solve challenges related to modernizing the U.S. electric grid. Round One of the Solar Energy Innovation Network comprises nine teams, each consisting of several different stakeholders who all work within a similar technology or geographic area.

Teams implementing pilot projects are paired with analytical support from a broad set of technical experts, such as NREL. The goal is for this innovation network to develop novel applications of solar energy and other distributed energy technologies. To make them ready for widespread adoption, these applications will be rigorously demonstrated and validated in real-world laboratories. The application process for Round 2 for the Innovation Network will begin in July 2018. 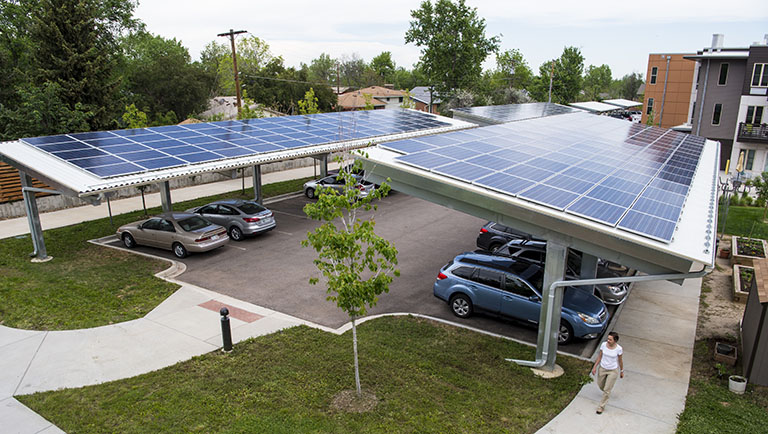 The Institute of Electrical and Electronics Engineers (IEEE) has just published the full revision of IEEE 1547, which establishes uniform requirements for interconnection of distributed energy resources (DERs), such as solar photovoltaics, with the electric power system. "This full revision will help to accelerate modernization of our electric power systems infrastructure by enabling the use of modern DER technologies, such as grid-supportive inverters," said David Narang, NREL principal engineer and chair of the IEEE 1547 Revision Working Group. "This builds on the foundation for integrating clean renewable energy technologies as well as other distributed generation and energy storage technologies.

Early developments of the standard were largely influenced by the pioneering efforts NREL engineers Dick DeBlasio, Ben Kroposki, and Tom Basso, and NREL has continued to play a major role in developing the standard. For example, NREL engineers Andy Hoke and Mike Coddington have been leading sub-groups related to IEEE 1547, for secondary grid networks, and the sister standard, IEEE 1547.1, which defines the testing procedures for conformance to IEEE 1457-2018. 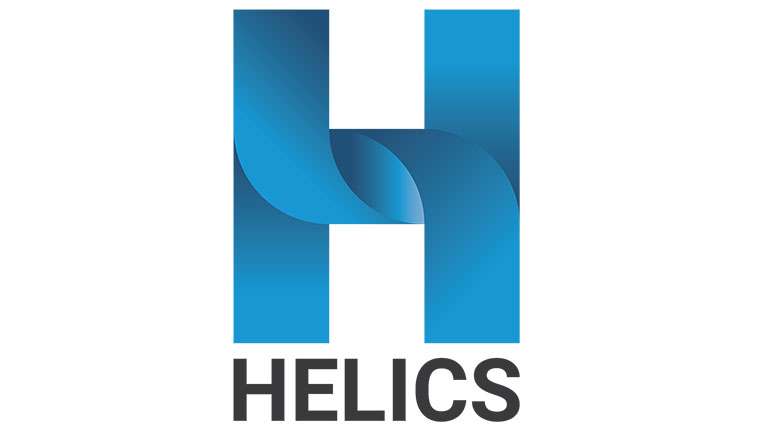 To some, a modern energy system is a complex beast, composed of millions of interdependent energy resources. So, providing a comprehensive simulation can be a nightmarish endeavor. Many software models can simulate parts of such a system, with no off-the-shelf solution able to link all these models to reconstruct a complete system. But now, a new NREL-developed software package—the Hierarchical Engine for Large-scale Infrastructure Co-Simulation (HELICS)—provides just what is needed: a high-performance framework that links models for both the cyber and physical domains of energy systems.

HELICS uses co-simulation to combine off-the-shelf simulation tools to act as a single unified model, exchanging data at each time step. This makes simulation possible for complex power systems, end-use, and communication/control interactions. And it does this at scales ranging from smart homes up to system-wide, transmission-distribution systems as large as the Western Interconnection. Two NREL researchers, Bryan Palmintier and Dheepak Krishnamurthy, are the masterminds behind the newly debuted software. Their effort, as part of the Grid Modernization Laboratory Consortium, combines the collective experience of multiple national laboratories. 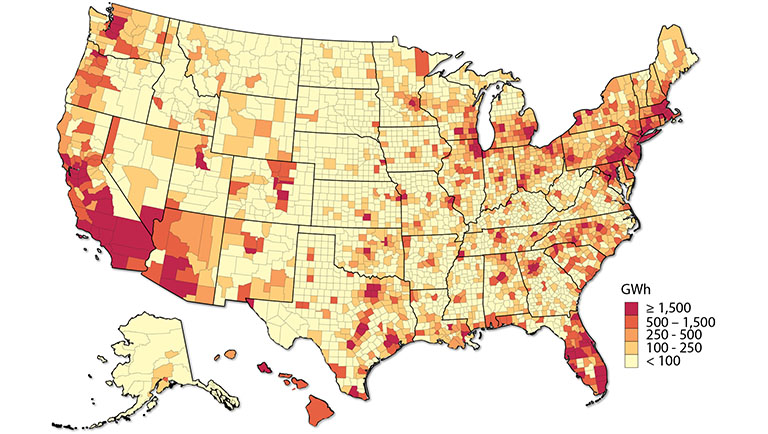 To date, existing rooftop solar adoption in the U.S. has been mostly concentrated in middle- and upper-income households. However, a new NREL analysis has found that the rooftops of low and moderate-income housing represent 42 percent of all rooftop technical potential in the U.S. residential sector.

Relying on LiDAR scans of 128 cities and complex statistical analysis, the NREL report provides a novel assessment of the solar generation potential in low-to-moderate income (LMI) households in the United States. In addition to the report–Rooftop Solar Technical Potential for Low-to-Moderate Income Households in the United States–the research has yielded a new, publicly available data set, and a web app that makes it easy to explore LMI solar potential across the country.

"We designed the study and associated tool to provide quality, objective data to help inform the decisions of all key stakeholders," said report author Benjamin Sigrin. "The findings can help communities make informed decisions that best meet their needs as they address long-term solar adoption targets across demographic categories and building type."

Review of Interconnection Practices and Costs in the Western States

NREL predicts that 3 million acres will be devoted to utility-scale solar farms by 2030, and 6 million by 2050. Can that land help support pollinators?