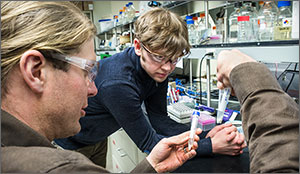 Thanks to newer and faster supercomputers, today's computer simulations are opening hidden vistas to researchers in all areas of science. These powerful machines are used for everything from understanding how proteins work to answering questions about how galaxies began. Sometimes the data they create manage to surprise the very researchers staring back at the computer screen—that's what recently happened to a researcher at the Energy Department's National Renewable Energy Laboratory (NREL).

What startled Beckham was a computer simulation of an enzyme from the fungus Trichoderma reesei (Cel7A). The simulation showed that a part of an enzyme, the linker, may play a necessary role in breaking down biomass into the sugars used to make alternative transportation fuels.

Working Together in Ways We Don't Understand

"For decades, many people have thought these linkers are quite boring," Beckham said. "Indeed, we predicted that linkers alone act like wet noodles—they are really flexible, and unlike the catalytic domain or the binding module, they didn't have a known, well-defined structure. But the computer simulation suggests that the linker has some function other than connecting the binding module to the catalytic domain; namely, it may have some cellulose binding function as well."

Cellulose is a long linear chain of glucose that makes up the main part of plant cell walls, but the bonds between the glucose molecules make it very tough to break apart. In fact, cellulose in fossilized leaves can remain intact for millions of years, but enzymes have evolved to break down this biomass into sugars by threading a single strand of cellulose up into the enzymes' catalytic domain and cleaving the bonds that connect glucose molecules together. Scientists are interested in the enzymes in fungi like Trichoderma reesei because they are quite effective at breaking down biomass—and fungi can make a lot of protein, which is also important for biomass conversion.

To make an alternative fuel like cellulosic ethanol or drop-in hydrocarbon fuels, biomass is pretreated with acid, hot water, or some other chemicals and heat to open up the plant cell wall. Next, enzymes are added to the biomass to break down the cellulose into glucose, which is then fermented and converted into fuel.

A screenshot from the computer simulation of an enzyme from the fungus Trichoderma reesei (Cel7A). The simulation showed that a part of an enzyme, the linker, may play a necessary role in breaking down biomass into the sugars used in making alternative transportation fuels.
Illustration by Christina M. Payne and Gregg T. Beckham, NREL

While Beckham and his colleagues were excited by what the simulation showed, there was also some trepidation.

"At first we didn't believe it, and we thought that it must be wrong, so a colleague, Christina Payne [formerly at NREL, now an assistant professor in chemical and materials engineering at the University of Kentucky], ran another simulation on the second most abundant enzyme in Trichoderma reesei (Cel6A)," Beckham explained. "And we found exactly the same thing.

"Many research teams have been engineering catalytic domains and binding modules, but this result perhaps suggests that we should also consider the functions of linkers. We now know they are important for binding, and we know binding is important for activity—but many unanswered questions remain that the team is working on now."

The NREL research team experimentally verified the computational predictions by working with researchers at the University of Colorado Boulder (CU Boulder), Swedish University of Agricultural Sciences, and Ghent University in Belgium. Using proteins made and characterized by the international project team, NREL's Michael Resch showed that by measuring the binding affinity of the binding module and then comparing it to the binding module with the linker added, the linker imparted an order of magnitude in binding affinity to cellulose. These results were published in a recent article in the Proceedings of the National Academy of Sciences (PNAS). In addition to Beckham, Payne, and Resch, co-authors on the study include: Liqun Chen and Zhongping Tan (CU Boulder); Michael F. Crowley, Michael E. Himmel, and Larry E. Taylor II (NREL); Mats Sandgren and Jerry Ståhlberg (Swedish University of Agricultural Sciences); and Ingeborg Stals (University College Ghent).

"In terms of fuels, if you make even a small improvement in these enzymes, you could then lower the enzyme loadings. On a commodities scale, there is potential for dramatic savings that will help make renewable fuels competitive with fuels derived from fossil resources," Beckham said.

According to Beckham, improving these enzymes is very challenging but incredibly important for cost-effective biofuels production, which the Energy Department has long recognized. "We are still unraveling a lot of the basic mechanisms about how they work. For instance, our recent paper suggests that this might be another facet of how these enzymes work and another target for improving them."

"Peregrine will be incredibly useful for continuing this work because there are so many facets we are still trying to understand," Beckham said. "We are still trying to understand how the binding module sticks to cellulose in more detail, how the chemical reaction occurs in the catalytic domains of these enzymes, and how the chains thread through the enzymes—and that's all just for this one enzyme."

"We've recently published a paper on an enzyme from the wood-boring crustacean called the gribble with collaborators from the Universities of Portsmouth and York in the United Kingdom. The catalytic domain of the gribble is similar, but it has some key differences. Now we're using supercomputing and experiments together to understand the differences between a cellulase from an animal versus one from a fungus."

These types of results demonstrate that supercomputers are an essential research tool that will continue to open doors to discovery, and throw in a few surprises along the way.

"We didn't go into this with the hypothesis that the linkers would bind—we were simply looking to see how the enzyme behaves on the surface," Beckham said. "Our finding was completely serendipitous, but it really shows the value of these computer simulations. They allow us to look at things with a molecular microscope and understand how enzymes work, often by predicting new features that we hadn't even thought of before."