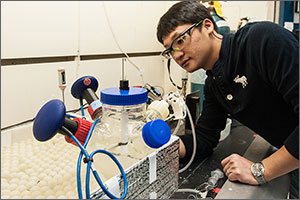 NREL scientist Qiang Fei examines a fermenter containing microbes that can consume methane at NREL's Integrated Biorefinery Research Facility. NREL is working with partners to see if the microbes can eat the methane vented or flared off gas wells in the fracking process.
Photo by Dennis Schroeder, NREL

In the annals of impressive eating, there was The Cat That Swallowed the Canary and The Eggplant That Ate Chicago. Now, add The Microbe That Consumes the Methane.

A microbe capable of digesting methane could save countless tons of greenhouse gas from reaching the atmosphere during the hydraulic fracturing process. Hydraulic fracturing, also known as fracking, uses pressurized water to fracture rock to release natural gas. It's been a boon to local economies and a source of inexpensive fuels—but if nothing is done to capture the byproduct methane, which is typically flared in the air, it can also contribute heftily to greenhouse gases in the atmosphere.

Scientists and engineers at the Energy Department's National Renewable Energy Laboratory (NREL) are working with colleagues at the University of Washington (UW), LanzaTech, and Johnson Matthey to develop microbes that convert the methane found in natural gas into liquid diesel fuel. If successful, the Biological Gas to Liquids (BioGTL) process could also lower our dependence on foreign oil.

The amount of natural gas simply flared or vented from oil wells globally is enormous—six trillion cubic feet, equal to one-third of the amount of petroleum used in the United States each year, which adds up to $12 billion in lost potential revenue annually. This adds greatly to global greenhouse gas emissions because every molecule of methane vented to the atmosphere in the fracking process has the global-warming capacity of 20 molecules of carbon dioxide.

"Fracking for oil has led to huge increases in the amount of natural gas that is flared or vented," said Philip Pienkos, principal manager of the Analytical Chemistry and Life Sciences Group of the National Bioenergy Center at NREL. "Look at nighttime satellite shots of the upper Midwest [see second image to the right]. You see Chicago, you see Minneapolis, and you see North Dakota, just as bright." The first two show the lights from big cities; the third reveals the flare from fracking wells in rural North Dakota.

Today, with 600,000 fracking wells in the United States alone, pressure to use the technology to reach untapped petroleum reserves is greater than ever. The U.S. Energy Information Agency says that 209,439 million cubic feet of natural gas was vented or flared in the United States in 2011. That is roughly equivalent to 36 million barrels of oil per year wasted. If that stranded natural gas can be turned into a liquid, then it can be piped along with the petroleum to refineries where it can be turned into diesel suitable for trucks and cars, or even jet fuel for use in planes. 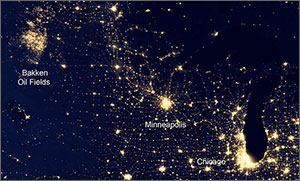 In the night sky, a satellite image captures the sources of light in the Midwest. The light seen over the Bakken Oil Fields comes from fracking operations as the flaring of methane into the atmosphere lights up the sky—shining nearly as bright as the city lights in Minneapolis and Chicago.
Photo from NASA Earth Observatory

Backed by a $4.8-million Advanced Research Projects Agency – Energy (ARPA-E) award from the Energy Department, the scientists are making progress. The goal of the project is to transform the current landscape of the energy and raw materials markets by producing a scalable, low-cost, low-temperature, and low-environmental-impact way of converting that wasted methane into a transportation fuel.

Historically, oil wells have typically been situated in locations where the natural gas could be captured and sold as a chemical feedstock or as a fuel for heating and electricity generation. The amount of natural gas that was flared or vented was not considered to be such a concern. However, as we become more aware of the impact of greenhouse gas emissions, and as fracking has led to huge increases in domestic oil production in areas too remote for effective and economical natural gas capture and transport, natural gas flaring has become a dilemma for the domestic energy industry.

At the same time, fracking in other areas specifically for natural gas has increased the volumes produced and lowered prices so much that there is even less incentive to capture it at an oil well. But by happy accident, the average well is about the right size to accommodate a fermentation and conversion facility to grow the methane-eating bacterium (known as a methanotroph) and to convert the natural gas into liquid fuels. The microorganisms can be grown in fermenters with the help of nutrients such as nitrogen, phosphorous, and salts. The same water that comes out of the ground with the oil or that is available from nearby seawater can be used to operate these fermenters.

Microbe Has Novel Qualities; Can Use Methane as a Carbon Source

The scientists chose a novel microbe, Methylomicrobium buryatense 5GB1, which is one of just a few bacteria that have a high natural potential for producing lipids (a good biological feedstock for hydrocarbon-based fuels) from any carbon source. Within that small subset, 5GB1 is a rare species that can use methane to produce lipids—the precursor to fuel.

Scientists from NREL, UW, and LanzaTech have already shown at laboratory scale that the unique microbe growing in a simple mineral medium supplemented with a salt and carbonate buffer can double in three hours—twice as fast as other methanotrophs. Even with the faster growth, the lipid content comes in at an impressive 17% to 22%.

NREL's first major challenge was to demonstrate that the process can be done safely. In NREL's Integrated Biorefinery Research Facility, microbes consume the methane fed carefully into a fermenter, under the watchful eye of NREL Scientist Qiang Fei. "It's all about safety," Fei said, demonstrating how controls can combine methane and air in a safe way. He worked on the process for months, and in December, the continuous-feed system passed a safe work permit (SWP) protocol. That marks a big step on the road to getting commercial-scale fermenters to well sites.

UW researchers are focusing on genetically modifying the microbes to both increase the amount of membrane lipids and get the microorganism to produce non-phosphorous-based lipids that are more readily converted to fuels. At the same time, the United Kingdom-based Johnson Matthey team is working to convert the phospholipids into diesel fuel. Combining the super microbe with the best methane oxidation machinery at the fracking wells could result in a bumper harvest of lipids and create conditions that will yield even higher liquid fuel outputs.

New Zealand-based LanzaTech, a pioneer in waste-to-fuels technology, has signed on to take the bench-scale plan to the commercial level if it is successful.

NREL in Charge of Fermentation; Will Analyze Economic Potential 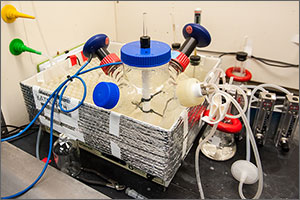 This countertop experiment—which is feeding methane into a fermenter that contains microbes capable of consuming the methane—is a prototype of the fermenters that in the future may digest methane at many of the 600,000 fracking wells in the United States.
Photo by Dennis Schroeder, NREL

NREL is in charge of fermentation to demonstrate the productivity of the microbes in batch cultures of both the native organism and the genetically altered varieties. NREL will also extract the lipids from the organisms and analyze the economic potential of the plan. Pienkos and his colleagues at NREL have been establishing a safe operating system to ensure there won't be any incidents with the experimental plan.

"We developed a great relationship with NREL's Environment, Health, and Safety Office, with all participants committed to both safety and the success of the project. We spent six months taking baby steps to grow the culture, but we've turned the corner," Pienkos said. "We're about to see a huge spike in progress. This is also serving as a new model for the research we do in the National Bioenergy Center. We are working with new feedstocks and producing new target molecules. We are absolutely committed to making sure that all the safety pieces are in place before we get started."

Challenges remain. Using microbes to convert methane depends on the mass transfer of gaseous oxygen and methane, neither of which are very soluble in water. In addition, the heat generated by the rapid growth must be removed.

But interest in the process is high. An Energy Department Bioenergy Technologies Office workshop in Chicago on turning natural gas into liquids drew a large crowd of important industry players. In addition, ARPA-E has recently awarded winners in its REMOTE (Reducing Emissions using Methanotrophic Organisms for Transportation Energy) solicitation to identify additional technologies to convert methane to fuels.

In its application to ARPA-E, the research team asserted that the process will simultaneously capture the energy lost by the stranded natural gas, provide a new source for liquid hydrocarbons, and mitigate greenhouse gas emissions—and the process will provide new jobs and new production capacity, while disrupting the current liquid fuel paradigm. That's because the Bio-GTL diesel product can use the existing pipelines at extraction sites to travel to refiners where it will undergo processing. It could prove useful for petrochemicals, too.

One more potentially transformative benefit: the single-cell protein produced as a byproduct has been explored for more than 20 years as a source of nutrition for both humans and animals.

Save trillions of tons of greenhouse gas; produce liquid diesel cheaply and safely; create a source of nutrition for livestock and people.

Not bad for an organism too small to see.