Reviving Algae from the (Almost) Dead

Tucked away in darkness and almost dead, algae can emerge from a frigid and foggy environment to live again—and perhaps even become the seeds for a new beginning that can provide biofuel for a clean energy future.

At the Energy Department's National Renewable Energy Laboratory (NREL), and at dozens of other labs nationwide, algae are like a junior high kid with great promise: slow to arise, but packed with energy for the long haul. It may take years, but eventually the great expectations can be reached.

A gallon of fuel made from algae currently costs about quadruple the cost of a gallon of conventional diesel. But looking long term, algae are an inexhaustible resource that if used as a substitute for fuels would slash the amount of carbon dioxide in the atmosphere—and costs are dropping. 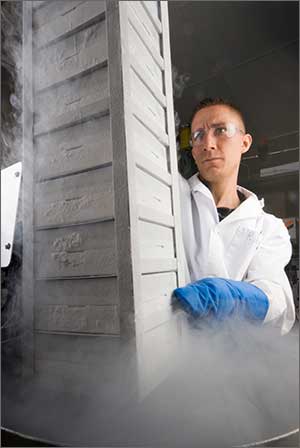 "We do cryogenic resurrection of algae from our library of strains," Sweeney said. "We get calls from other labs, universities, private companies, or from our own researchers requesting a particular strain.

"It's not as simple as pulling something frozen out of the freezer; the protocol is to slowly bring it back to a state where its biology is going to start functioning normally."

"When we first started this, my boss used to tell people how hard it was to freeze algae," said Phil Pienkos, principal manager of the Bioprocess R&D group of the National Bioenergy Center at NREL. "I always corrected him: It's easy to freeze algae. The hard part is thawing them out without killing them."

The frozen algae samples are held in 2-milliliter vials in a 4-foot-high cryogenic tank, some frozen for as long as five years. A typical household freezer might operate at about -18°C, just a few degrees below freezing. By contrast, the cryogenic tank at NREL is set at -195°C. Liquid nitrogen provides the chill for the tank, which has a kind of 'Lazy Susan' inside to make it easier to access the 500-plus strains. The algae stay alive, but dormant, despite the extreme cold thanks to a 5% solution of a cryogenic protectant solvent such as methanol. It's totally dark inside the tank.

Cells Are Like Coffee Grounds in the Deep Freeze 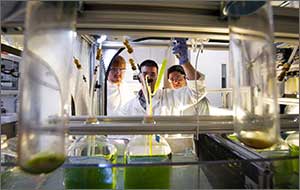 Sweeney looks up a strain's location—in the 15th position in the box on rack four, shelf five, for example—and opens the tank, releasing foggy vapors of liquid nitrogen. He carefully removes the vial.

The cells inside the vial are pelleted and look like coffee grounds. The first step is to separate the liquid from the solids, using a centrifuge to spin the pellets rapidly. When the water, salts, and cryogenic protectant solvents are removed, what remains are the green algae cells.

When reviving the cells, it is essential to keep them in the dark for the first several steps of the process. A paper towel around the vial can do the trick.

The aim is to slowly replicate the algae's natural environment, so a growth medium is introduced. Depending on where the strain came from, the growth medium could be brackish, salty, or mostly fresh water, or it could include numerous ingredients that replicate the natural water chemistry.

The samples are next put in a shaker to make sure the cells mix well with the growth medium. After the pellets are re-suspended in the growth medium, they're placed in a subdued lighting environment for 24 hours. They can be damaged if they're immediately hit with full light. Gradually, the light intensity is increased. The algae replicate on their own, and soon the population has doubled, quadrupled, and more. 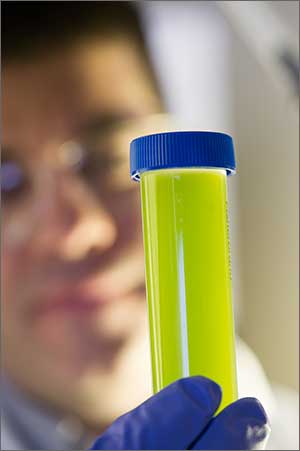 Nick Sweeney holds a sample of algae being grown in a tent reactor.
Photo by Dennis Schroeder, NREL

But why do we concern ourselves with freezing and thawing novel algal strains? Algae pose several advantages. They have much greater productivity—50 times greater—than their terrestrial cousins when measured by biofuel output per acre. Unlike corn and soybeans, they are a non-food resource. And they use otherwise nonproductive land, such as deserts, brackish lakes, and oceans. Plus, they often can be used in conjunction with wastewater treatment. Algae not only have the potential to produce the feedstock for transportation fuels, but in the future, algae offer an opportunity to recycle carbon dioxide from other sources of energy.

A unique bioreactor at NREL can reveal the intricate biochemical rearrangements that algae undergo when grown under different conditions, including the climatic differences found in locations throughout the United States. That capability is critical because it can pinpoint the ideal locations for farms to produce algae that could someday compete with renewable diesel, cellulosic ethanol, and other petroleum alternatives.

NREL researchers using this unique bioreactor also have shown that algae grown under the right conditions can produce not just lipids, but proteins and carbohydrates that can be turned into diesel, butanol, ethanol, and other fuels useful to industry. NREL has nearly doubled the fuel it can get out of the same amount of algae by using the additional components.

NREL's algae research has included collaborations with Cellana, Sapphire, and Algenol, as well as a partnership with Chevron Corp. to develop new technologies to accelerate the commercialization of algal biofuels. Most of NREL's funding in this area has come from the Energy Department's Bioenergy Technology Office, but the lab was recently awarded funding from the Office of Science for pathway engineering in algae.

The algae will live on after their prolonged near-death experience. They won't be used in some sort of mad scientist's scheme, but rather for the benign goal of evaluation for use as a biofuel production strain. And if algal cultivation for biofuel production can be successfully deployed, the result won't be world domination, but something a lot more positive—like reduced greenhouse gas production, energy security, and job creation.