NREL's Nate Blair and Suzanne Tegen take a look at NREL's Solar Prospector tool, which provides information about the sun's resource potential at any spot in the nation. Industry is using models created by NREL to plan for renewable energy installations.
Photo by Dennis Schroeder, NREL

Whenever installers attach solar panels to rooftops, utilities debate the merits of a wind farm, or investors mull the potential return on a concentrating solar power (CSP) plant, there's a good chance that the performance and risk models created by the Energy Department's National Renewable Energy Laboratory (NREL) come into play.

Can a rooftop photovoltaic (PV) system work for all the homeowners in a particular neighborhood, or only for the ones with a 40-degree pitch to their roofs? Will the wind resource that works in a west Texas county work as well one county over?

With accelerated interest in technologies that can provide energy while lowering carbon emissions, it becomes all the more crucial that manufacturers, installers, and their bankers can accurately predict the performance levels and financial risks associated with wind, solar, and other types of renewable energy. Precise, reliable models are also indispensable for those at universities and labs who are working to make incremental improvements to hardware and software.

Modelers at NREL develop and constantly improve data and algorithms to enhance the accuracy of risk assessments and performance modeling of renewable energy projects. NREL makes its robust models available to various audiences, thereby improving the analysis of risk and performance associated with the projects, whether they're at the residential, commercial, or utility scale.

Hurrahs from Industry for Developing Tools for All 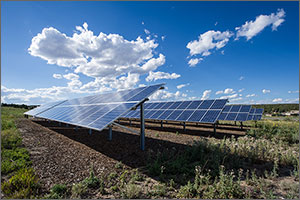 Decisions about where to site solar arrays, such as these concentrating photovoltaic arrays built by Amonix, often rely on sophisticated modeling tools created at NREL.
Photo by Dennis Schroeder, NREL

"NREL's models are a great service to the industry," said Gary Wayne, the principal for the solar design platform for Sunrun, which has installed 60,000 systems on rooftops nationwide. "NREL has been able to provide a standardized model that energy companies—and especially homeowners and bankers—can rely on. They've done great work on the design of the Solar Advisor Model [SAM]."

Wayne particularly likes that the NREL models are modular, which means Sunrun can put specific components of the SAM and other tools into its own systems. "We're able to incorporate them into our own production software, and that gives us great flexibility."

NREL's models are essential, he added. "Each individual solar company could not afford to invest in such a comprehensive national tool. By NREL taking that on, it frees all the other solar companies from having to duplicate that work."

Excellent ideas for improvements in wind and solar energy systems come from all quarters—universities, startups, utilities, laboratories. The modelers at NREL make sure none of those ideas are shut out for lack of money or lack of name recognition. NREL's tools are just a few clicks away on a public platform, whether the user is a large corporation or a small startup.

Nate Blair, manager of NREL's Energy Forecasting and Modeling group, said: "Our goal is to really allow others to do complex analysis easily—from our own researchers here at NREL to academia to industry. That multiplies our efforts significantly." 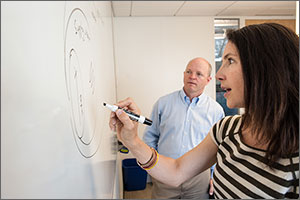 Suzanne Tegen, manager of the Market Transformation group at NREL's National Wind Technology Center, illustrates the factors that are analyzed to calculate the economic impact of a solar array or solar farm in a community. Looking on is Nate Blair, manager of NREL's Energy Forecasting and Modeling group.
Photo by Dennis Schroeder, NREL

NREL's PVWatts tool allows anyone to enter a particular address —say, 1600 Pennsylvania Avenue in Washington, DC. They'll find that the weather profile for that location is gathered from Reagan National Airport.

They'll find that solar panels are already on the White House, but the PVWatts tool invites users to play with the numbers. Increasing the existing system to a 35-kilowatt system kicks out 42,000 kilowatt hours a year, but what if the tilt or the angle was changed? April is the month in which the most electricity is produced, but how little is generated in the hazy summer months? At 12 cents per kilowatt-hour, what's the total value of the energy produced? How many years before that value exceeds the cost of the system?

Of course, PVWatts and SAM can be even more valuable before a system is installed. What happens if it is tilted a few degrees to the east, rather than due south? Installers can change the numbers, optimize the likely production, and tweak the system before the bolts and clamps are laid down. Utilities are particularly interested in PVWatts because they may pay subsidies based on the expected performance of the systems.

NREL tools such as SAM and PVWatts—plus the lab's analysis of others' tools—help companies and researchers examine their particular circumstances: the variables of their particular climate, the incentives in their state, the kilowatt-hour rate in their locales, the neighborhood bank's interest rate, and more. "By improving the characterization of risk, the models are improving the bankability of renewable projects," Blair said.

University researchers use the NREL tools to probe such issues as net metering, and how changes to it affect the economics. They need the best data and modeling to draw accurate conclusions. With the NREL tools, "they can get up to speed quickly. They can generate the output in days, rather than months," Blair said.

And there alwayis s more work to do. NREL's modeling staff is developing new tools, including improved models for energy losses from components in a PV system, and a model that shows the effects of shading on overall energy production. 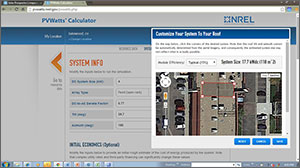 The new PVWatts website allows users to approximate the roof area of a photovoltaic system.

NREL's Jobs and Economic Development Impact (JEDI) models are a suite of user-friendly tools that estimate the economic impacts of constructing and operating power plants, fuel production facilities, and other projects.

For example, a 500-megawatt wind project off the coast of Massachusetts, projected to begin construction in 2018, would include 167 turbines with capital costs of about $6,000 per kilowatt. One of JEDI's suite of tools, the offshore wind model, lists construction costs, including the percentage of dollars devoted to the nacelle, the blades, the tower, etc., and estimates annual operation costs in detail.

"It also estimates how many jobs are supported by the project, their wages, and the overall economic impact," said NREL's Suzanne Tegen, who manages the Market Transformation group at NREL's National Wind Technology Center. "For example, the land-based wind model incorporates things like land lease benefits to farmers and projected property tax revenues to counties and states—even things like on-site construction operations and maintenance, or the sale of cement to build the roads and anchor the turbines."

The JEDI model includes the entire supply chain—the equipment to build the project, the fiberglass in the blades, the steel in the tower, the lawyer fees. This includes the induced impacts from the money spent by the crews that stay in the area for as long as the construction takes—the projected dollars they will spend at hotels, local restaurants, and the like.

JEDI is also an important tool for county commissioners, public utility commissions, project planners, and developers, Tegen said. And it's used frequently by academic researchers, nonprofits, and other government agencies, such as state energy offices.

Several states and utilities already require the NREL tools or similar models to be used if a utility, company, or homeowner wants to take advantage of renewable energy incentives.

For CSP, NREL's SAM tool is the only one available that can examine performance each hour of the year. For both CSP and PV, the NREL tools are the only ones that can tie together both detailed performance and detailed cash flow models.

Combining the NREL tools with a company's own proprietary software is a growing phenomenon, Blair said. "Companies want to use their own tools along with ours. They can download the engine for our tools and use it together with their own systems. We provide them with the library, and they can code it into their own online services."

Blair and his colleagues take satisfaction in knowing that NREL's tools help accelerate the industry. Call up the model, input four or five variables, and voila, there on the screen is a robust estimate of the solar resource on a house or commercial building. "Both company representatives and university researchers tell us that putting it all into a useful package is a valuable service."