"Big data" is playing an increasing role in the renewable energy industry and the transformation of the nation's electrical grid. NREL's Peregrine supercomputer is already fulfilling the goal of handling large and complex datasets that exceed traditional database processes.
Photo by Dennis Schroeder, NREL

"Big data" is playing an increasingly big role in the renewable energy industry and the transformation of the nation's electrical grid, and no single entity provides a better tool for such data than the Energy Department's Energy Systems Integration Facility (ESIF) located on the campus of the National Renewable Energy Laboratory (NREL). Imagined by NREL leaders who foresaw the possibilities for high performance computing (HPC), the ESIF's HPC data center is fulfilling the goal of handling large and complex datasets that exceed traditional database processes.

"As industry moves forward to integrate all these renewables, big data is a key piece of the puzzle," ESIF Business Development Manager Martha Symko-Davies said. "The links between modeling and simulation, hardware, and good, bad, and aggregated data—all parts of the whole puzzle—are captured at the ESIF through big data." That's why the ESIF's Peregrine supercomputer, dedicated by Energy Secretary Ernest Moniz in September 2013, is so important; it can do more than a quadrillion calculations per second as part of the world's most energy-efficient HPC data center. 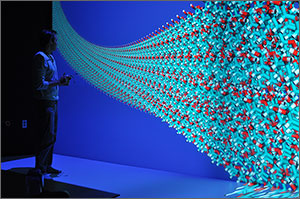 "Peregrine provides much-needed computational capability to model complex systems such as the grid, to allow us to ask 'what if' questions, and to optimize how these systems are designed and deployed with much higher confidence in their efficiency and robustness," NREL Computational Science Center Director Steve Hammond said.

Increasingly, those "what ifs" involve the challenge of delivering distributed energy to the grid when the sun shines and the wind blows, while making it  even more reliable than when the grid was a one-way delivery system of fossil-fuel-based energy. "By focusing on the integration and optimization of energy systems across the energy infrastructure, we can better understand and make use of potential co-benefits that increase reliability and performance, reduce cost, and minimize environmental impacts," NREL Director of Energy Systems Integration (ESI) Ben Kroposki said.

This focus will help map the pathway NREL will pioneer with the Energy Department to modernize the nation's electrical grid. The ESIF "will be a major focus of DOE to help us transform the energy system to the one we need in 2030," Moniz told the audience at the ESIF's dedication. The ESIF is "the step up we need to elevate energy systems integration," he said.

Thanks to the capacities of the ESIF and Peregrine, efforts are underway at NREL to move commercial-scale research and development and testing forward. In January 2014, NREL began to assemble a virtual link from the ESIF to NREL's National Wind Technology Center and other national labs and universities. "We're setting up this virtual network so that we can tap into other's resources and knowledge and not try to recreate it here at NREL," NREL Associate Laboratory Director for ESI Bryan Hannegan said.

ESIF and NREL's Partners Work Together 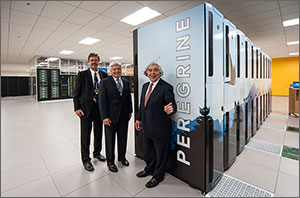 Collaboration is key, and it is hard-wired into the ESIF's core. NREL teamed with Hewlett-Packard (HP) and Intel to develop the innovative warm-water, liquid-cooled Peregrine supercomputer.

The HP Apollo liquid-cooled supercomputing platform provides the foundation for numerical modeling and simulations, which allow scientists to gain new insights into a wide range of topics. However, as HPC systems scale up by orders of magnitude, energy consumption and heat dissipation stress the supporting systems and the facilities in which they are housed. With NREL's HPC data center, 90% or more of the computer's waste heat is captured and reused as the primary heat source for ESIF offices and laboratory space.

The ESIF truly was designed for partners—and NREL and its world-class facilities have made it known that they are open for business. "We've known that industry was eager for a place like the ESIF, which allows utility companies and investors to see technology working in real time and on a large scale," NREL Director Dan Arvizu said.

For example, Advanced Energy Industries is accessing the ESIF's Power Systems Integration Laboratory to test its new solar photovoltaic (PV) inverter technology with the facility's hardware-in-the-loop system and megawatt-scale grid simulators. The company's inverter will help support a smarter grid that can handle two-way flows of power and communication while reducing hardware costs.

Given the nature of global climate change, it's vital that the ESIF has a long reach. In a recent joint initiative between the U.S. Navy and the lab, NREL successfully demonstrated a new custom-engineered energy management system to maximize solar PV on a naval base in Hawaii while smoothing the effects of variable solar PV generation by charging and discharging batteries.

As demand for the ESIF expands, it helps another key area of growth: commercialization. "When industry and NREL work closely together, great things happen. The abilities of the ESIF allow manufacturers, industry, and the clean energy sector to bring new ideas to market," NREL Associate Laboratory Director for Innovation, Partnering, and Outreach Bill Farris said.

And it appears likely that the ESIF and its HPC capabilities will be in increasing demand in coming years. The word is already out on the one-year-old lab facility, which is home to 200 scientists and engineers—and the editors of R&D Magazine have named it the 2014 Laboratory of the Year.

Not surprisingly, the ultra-efficient HPC data center gets the spotlight. It helped NREL earn a 2013 U.S. Department of Energy Sustainability Award for its leadership in green information technology, including the lab's electronic stewardship practices and world-class HPC data centers.

The ESIF and Peregrine model what the future holds for the grid and energy systems, while helping industry and partners find a path to commercializing the technology needed to make that transformation.