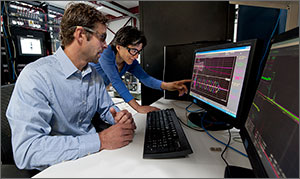 The U.S. National Climate Assessment report states bluntly that streets in coastal cities are flooding more readily, that hotter and drier weather in the West means earlier starts to wildfire seasons, and that every region of the nation already is seeing real effects of climate change.

"It's more vital than ever that the nation have a secure, reliable energy infrastructure that can respond to extreme weather events, integrate sustainable sources of energy onto the grid, and keep the lights on," said Bryan Hannegan, Associate Laboratory Director for Energy Systems Integration at the National Renewable Energy Laboratory (NREL). "Our existing electric system has served us well, but will it be up to the task of meeting our clean energy needs in a changing climate?"

And they're turning to the Energy Department's NREL and its newest building, the Energy Systems Integration Facility (ESIF), to test the latest concepts and devices that can intelligently manage energy from batteries, electric cars, wind, solar, and biofuels. It's the ideal testbed for the "microgrid," a system that can disconnect from the grid and continue to provide power, and then reconnect to the grid without disruption. As decision makers become more concerned about climate change and its effect on the resilience of America's energy infrastructure, microgrids become increasingly important components.

NREL Electrical Engineer Greg Martin, who works with microgrids, said the nation is moving toward "more mobile, more deployable, transportable" energy systems, which will be particularly useful for disaster relief and military applications.

"The catchword today is integration—how can we link together emerging consumer demands and clean energy resources without disrupting the grid," Hannegan said. "The plug-in vehicle in the garage, the appliance in the kitchen, the rooftop solar and battery storage—when they're all hooked together, how is it going to work? And can we get it to work in a way that is secure, reliable, and saves money?"

"Right now, we're a heavily centralized system," Martin said. "There is a lot of opportunity to implement these new technologies like rooftop solar and energy storage. Once you get rooftop solar with battery storage, and once you start viewing plug-in vehicles as both users and suppliers of energy, and find a way to tie in to existing grid or fossil fuel resources and the utility grid, you have great potential for micro-gridding. It can mean reduced fuel use and increased efficiency, and can serve as emergency backup power during disasters."

Microgrids can be integral to a system that doesn't want to rely on more coal or natural gas—or new plants operating on fossil fuels—to only meet the peak loads that may come just an hour each day, or just a few times each summer or winter. A new smarter system would have a specified interface to a battery and, say, a wind turbine that can smooth out the transition from one source of energy to another. Instead of relying on fossil fuels, the system can rely on wind, solar, and other alternative energies to get neighborhoods through those crucial hours of peak demand. Smart integration of a variety of components—both renewable and fossil fuel—can minimize expensive fuel use, while making the delivery of electricity cleaner and more efficient.

Useful for Weather Outages, Which Are on the Rise 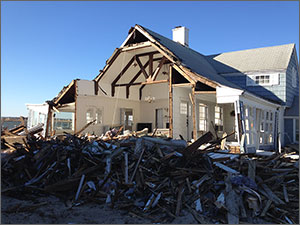 There have been 144 weather-related climate disasters since 1980 in which overall damages reached or exceeded $1 billion according to the Energy Department report U.S. Energy Sector Vulnerabilities to Climate Change and Extreme Weather. Shown here is damage from Hurricane Sandy. NREL's Energy Systems Integration Facility researches the latest concepts and devices that can intelligently manage microgrids, which can serve as emergency backup power during disasters.
Photo by Eliza Hotchkiss, NREL

The White House Council of Economic Advisers and the Energy Department recently released the report Economic Benefits of Increasing Electric Grid Resilience to Weather Outages, which calls for more investment in the electric grid and identifies strategies for modernizing the grid to better prevent power outages. Those strategies include energy storage to improve system stability, along with microgrids and advanced communication and controls.

The April report from the Intergovernmental Panel on Climate Change warns that global surface temperatures will rise 9 degrees Fahrenheit without further mitigation of greenhouse gases. There have been 144 weather-related climate disasters since 1980 in which overall damages reached or exceeded $1 billion, events that have shattered and shocked nearly every region of the country, according to the Energy Department report U.S. Energy Sector Vulnerabilities to Climate Change and Extreme Weather.

Average annual temperatures across the 48 contiguous United States have risen approximately 1.5 degrees Fahrenheit since the dawn of the 20th century—and with this rise have come increasingly costly and increasingly frequent severe weather events that have taken a toll on people, property, and pocketbooks.

Hurricane Sandy pounded the East Coast in the fall of 2012, leaving devastation that affected 24 states. Utilities reported damage to more than 7,000 transformers and 15,200 power poles; two oil refineries with capacity of 300,000 barrels per day were shut down. The hurricane left 8.2 million people without power for weeks, and caused $71 billion in total loss. New York Governor Andrew Cuomo convened the New York State Commission 2100 in response to not only Hurricane Sandy, but other recent and unprecedented severe weather events such as Hurricane Irene and Tropical Storm Lee. The Commission recommended measures including protecting key transmission and distribution lines, strengthening marine terminals, and building a modern, more resilient grid that can take advantage of renewable energy and that can be a model for improving energy infrastructure nationwide.

NREL Director Dan Arvizu, who was a member of the New York 2100 Commission that issued the recommendations, said: "Given the magnitude of recent climate-related calamities, and the inevitability of more in the coming years, it is imperative that we grasp the opportunity to build a more resilient energy sector."

Priority must be placed on improving grid equipment and operations to better manage the complex, ever-changing load conditions—and to increase reliability and resilience. A more distributed and resilient energy infrastructure can overcome the long delays before power is restored, Arvizu said.

"Renewable energy can do much more than save on greenhouse gas emissions," he said. In the face of more and more extreme weather events, "islanded microgrids that combine renewable energy with backup storage can keep local power going when the grid goes down. And that can save both money and lives."

A key asset of some microgrids is that during a utility grid disturbance they can separate and isolate themselves from the utility seamlessly with little or no disruption to the loads within the microgrid. When the utility grid returns to normal, the microgrid automatically resynchronizes and reconnects itself to the grid in an equally seamless fashion.

Microgrids Scale up from Household Size to Large Networks 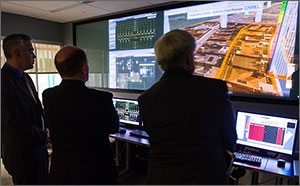 One house can have its own microgrid, a combination of, say, rooftop solar and a battery in the basement that stores the excess power generated by the sun and provides backup power to keep the furnace running in the case of a power outage.

Utilities working with homeowners or businesses can create a network of microgrids that help entire neighborhoods or cities to power through outages. In Portland, Oregon, customers with their own diesel generators have agreed to give the utility control of them when needed. The utility, Portland General Electric (PGE), uses a combination of solar power, battery storage, and backup diesel to ride through outages when the main system goes down. Tests at NREL addressed integration and communications issues, and helped PGE install a more robust system with minimal impact to electricity users.

NREL also helped test a microgrid system designed by the Consortium for Electric Reliability Technology Solutions (CERTS) that ties together natural gas co-generation and a microgrid gateway to provide both heat and electricity to customers, uploading and downloading power on and off the grid. This microgrid is currently owned and operated by the Sacramento Municipal Utility District.

This summer, NREL is collaborating at the ESIF with an Australian utility that is using inverters to integrate solar, diesel generators, and batteries. The effort will include development and testing of a microgrid control network that has the job of determining whether and when backup battery power is needed, and ensure consistent electricity is provided to users.

NREL's ESIF is the Place to Validate Integration of Power Sources 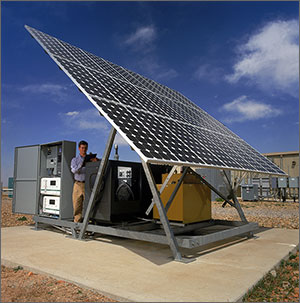 This standalone photovoltaic system at NREL's Distributed Energy Resources Test Facility creates a mini-grid wherever it goes and creates enough power to run a small home. It consists of a 1.8-kilowatt photovoltaic panel, a diesel generator for backup, and inverters to convert DC power to AC. This generation system is connected to other generation technologies like wind turbines and a microturbine to test interconnection.
Photo by Jim Yost

"It's a matter of getting stuff to work together," Martin said. And that requires partnerships. GE wants to sell appliances; Toyota wants to sell cars that plug into garage outlets. Sacramento Municipal Utility District needs to be sure that the rooftop solar and a box of backup batteries are working together seamlessly.

As the new generation of microgrids and inverters proves its mettle, there also needs to be an evolution in the standards that define the interface between the utility and the microgrid. "We're trying to make sure that these great new ideas work," Martin said. Solar arrays are becoming very robust, but there is still plenty of work to do to ensure that batteries and other equipment integral to energy integration communicate with each other flawlessly in real situations.

The ESIF has the capacity to test large components and systems, say, 500-kilowatt or 1-megawatt photovoltaic inverters. One of the ESIF's main missions is to be the last stop before the field. "Until we run it at rated power, kick it and bump it with grid fluctuations, and see what it actually does, we can't be sure it's going to function well in the field," Martin said. "That's why we're here. No one has ever been able to lab-test their equipment at a scale that is possible here at the ESIF."