Have you ever searched for solar energy data and didn’t know where to begin? Maps of solar power plants, installed solar capacity growth over time, projections for solar growth—this kind of information can be valuable to state policymakers trying to understand their solar landscape and craft policies to meet jurisdictional energy goals. One source policymakers can turn to for information about all energy sources, including solar, is the U.S. Energy Information Administration (EIA).

The EIA is an independent, non-partisan information agency that collects comprehensive U.S. energy data and prepares analyses, market forecasts, and long-term outlooks. EIA surveys a number of energy market participants, including power plants, generating units and utilities, which are then used to aggregate up to state and national estimates. Users can access energy information for free in a variety of formats (e.g. reports, maps, web products, data browsers, etc.)

The wealth of EIA energy data can be overwhelming to first-time and experienced users alike. To help state policymakers navigate valuable resources, the top five sources for solar data available at EIA are highlighted, including:

“In 2014, Colorado’s grid-connected solar photovoltaic capacity of 430 megawatts was the ninth largest in the United States, and the state obtained nearly 10 times as much net generation from solar power as it did just 5 years earlier in 2009.”

Learn this and other interesting facts about your state at EIA’s State Energy Data System (SEDS). The SEDS database contains quick facts (like the one above), maps (like the one below), rankings, and a wide variety of state specific data.

Summary data (which can be filtered by state, sector, source, etc.) can be found in the Electric Power Annual, or via the “Electricity” dropdown under “Sources and Uses” on EIA’s homepage.

If you need more recent or monthly data, check out the Electric Power Monthly datasets, including the Net Generation by State by Type of Producer by Energy Source dataset. If you just need to make a quick figure, try using EIA’s Electricity Data Browser.

If you are looking for the details behind the numbers or are just interested in a specific power plant or utility, then download detailed survey data files. The three most common surveys for electricity data are:

EIA produces an annual report, the Annual Energy Outlook (AEO), which makes projections on the future of the energy sector. EIA reference case projections are based on current laws and policies at the time projections are developed, while the suite of different scenarios account for uncertainty in baseline input assumptions and long-term U.S. energy policies.

The AEO makes projections for both the utility-scale and distributed generation solar markets out to 2040. An interactive table viewer allows users to find data from a specific projection. The AEO2016 Early Release is currently available and has energy projections for a future with and without the impacts of the Clean Power Plan. The full report will be released in late summer of 2016. 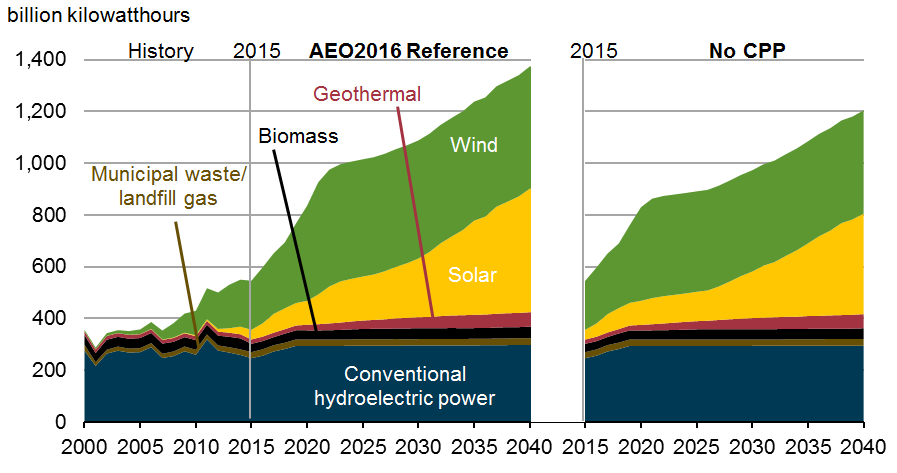 Month to Month projections: if you are interested in a more detailed month-by-month outlook over the next couple of years, visit EIA’s short term energy outlook.

Today in Energy, updated daily, keeps up with the latest energy data trends, such as this recent publication: Solar, natural gas, wind make up most 2016 generation additions.

Sign up here to subscribe to get updates on the articles and data that matter most to you.

Other data projects that EIA is currently working on to enhance the collection and presentation of data related to renewable energy include:

Cara Marcy, a renewable energy analyst at EIA, recently completed a 6-month exchange at the National Renewable Energy Laboratory (NREL). In this blog, she summarizes some of EIA’s data and analysis products that may be most useful for state and local policy makers making critical solar energy decisions.Cara Marcy, Renewable Electricity Analyst cara.marcy@eia.gov