Solar Energy Improving Resiliency: A Look at California During a Historical Drought

In February, the Solar STAT blog featured a post on 2012’s Hurricane Sandy and how solar PV can support disaster resiliency. Extreme weather events are not limited to hurricanes, of course. Others, like California’s ongoing drought, pose additional challenges for electricity generators but also demonstrate an emerging role for solar energy.

On January 17, 2014, California Governor Jerry Brown declared a state of emergency in response to the exacerbating state-wide drought (Figure 1) that officially began in 2011. The extreme heat and lack of precipitation that characterize this drought have had major impacts on how California generates electricity.

Figure 1. The extent of drought-impacted areas in California. Source: EIA, 2014 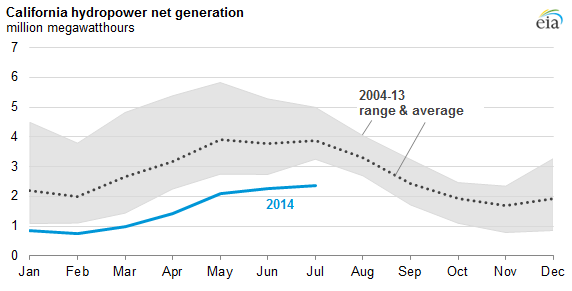 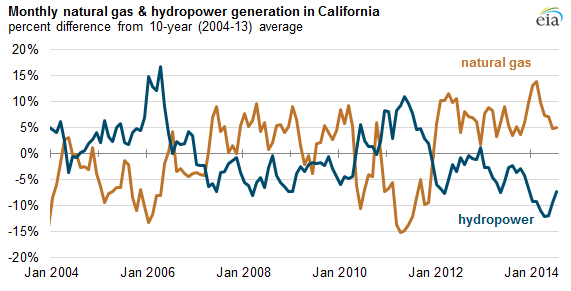 To an energy novice, 5% of a state’s energy portfolio from solar (Figure 5) may seem small but this figure is significant for two reasons:

Moreover, these figures do not include installed small-scale (typically residential and commercial-size) distributed solar capacity which the California Public Utility Commission (CPUC) estimates reached 2,300 MW in 2014 (California Solar Initiative and CPUC, 2015). Distributed solar PV typically decreases on-site electricity consumption; excess generation can be placed back onto the grid to be consumed by other electricity users. These numbers suggest that both utility-scale and distributed solar capacity have made important contributions to California’s electricity-generation response to drought.

California’s experience demonstrates how solar energy can support a state’s resiliency—to impacts of extreme weather events, on energy supply, and reliability. In particular, southwestern states may face more frequent and intense droughts as the climate changes; at the same time, these states have substantial solar energy resources that could be tapped. Solar-supportive state and local policies can influence levels of solar deployment, potentially leaving states better prepared to manage changes in energy supply due to drought.

For more information about the relationship between water and energy, read The Water-Energy Nexus: Challenges and Opportunities.