Best Practices in Zoning for Solar

The price of solar energy generation has plummeted in recent years, with the average installed cost for residential solar photovoltaics (PV) dropping 43% between 2010 and 2015.[1] Most of this decline has come from falling equipment prices, with the non-equipment costs, also known as soft costs (Figure 1), remaining fairly consistent.

Local communities have a big role to play in reducing the soft costs associated with installing solar energy systems. In addition to permitting and inspection practices, local zoning ordinances can either inhibit or support distributed solar deployment within jurisdictions. Identifying and addressing barriers to solar energy installations in the local zoning code is a baseline strategy for reducing solar soft costs. Below are several factors that communities might consider in evaluating their local zoning practices to enable solar deployment. 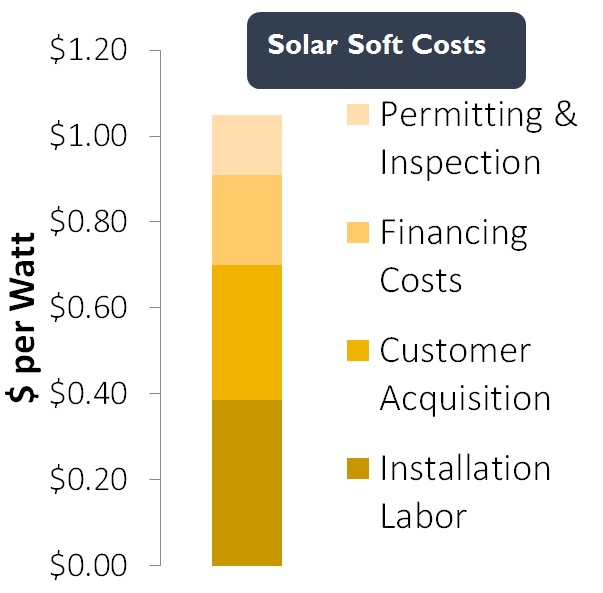 Establishing a clear foundation with an inclusive and comprehensive definition will prevent future misinterpretation. Broadly defining solar energy systems to include both passive and active solar energy collection will remove potential barriers. For example:

Including storage in the definition will accommodate the anticipated growth in battery storage devices linked to solar energy systems. Additionally, defining and distinguishing between large-scale installations and accessory-use installations[2] will allow subsequent sections to identify which projects require special review.

Allowing small rooftop and ground mounted solar installations as accessory uses or as a use-by-right (allowed without special zoning review) in all major zoning districts will streamline small-scale PV projects and minimize staff review time. Defining small solar energy systems will also clarify which systems do not require a zoning review prior to obtaining a building permit.

While aesthetic requirements are appropriate for historic districts, requiring solar energy systems to be screened from public view adds costs, can cause shading, and may prevent many installations.

A common misperception is that PV modules will cause glare or act like mirrors.  While some large-scale solar energy technologies do use mirrors to concentrate heat or light, PV modules instead absorb light in order to convert it into electricity. Any light reflected off a module cannot be converted into electricity. For this reason, PV modules use non-reflective glass and are generally less reflective than windows.[3]

Allowing for small, ground-mounted installations as accessory uses and large, primary-use installations through a conditional or special use permit establishes clear regulatory pathways for both and can help expand the local solar market. Community or shared solar installations may lower costs and barriers to solar energy access for residents and businesses, but they require zoning allowances for primary use, ground-mounted solar installations. Many cities leading in solar energy generation allow for larger systems in order to meet community goals and support economic development.

Establishing a mechanism to protect solar access for existing and planned solar energy systems (e.g., a solar easement for access to sunlight or a provision that new construction must address impacts to existing solar installations) helps avoid conflicts and potential litigation.

Free the electrons and focus on the impacts

In integrating solar into zoning codes, it is generally more effective to focus on reducing the impacts of solar energy systems on neighbors, rather than regulating how much electricity can be generated, who can use the electricity, and where it can be used. For example, requiring that accessory use solar electricity generation be consumed exclusively on-site is often irrelevant to the impact of an installation on neighbors and can prevent new ownership models. A best practice is to define and regulate solar installations based on the area (e.g., square feet) or impact of the installation rather than the capacity (kW) to prevent code from becoming outdated as efficiencies, technologies, and utility business models change over time.

Silence is a barrier

Many communities indicate that they allow solar installations even though there is no mention of solar in their zoning code. In these instances, the communities have a gap in their code that leaves the city and the solar energy system owner vulnerable if a resident opposes a neighbor’s installation or sues the city for allowing a land use that is not defined nor explicitly allowed in their local land use laws. According to the American Planning Association, “a conspicuous silence on the part of local policies, plans, and regulations on the topic of solar energy use constitutes a significant barrier to adoption and implementation of these technologies.”[4]

To access up to 100 hours of free technical assistance from national solar experts like NREL to address these and other gaps and barriers to solar, cities and counties can still sign up for the SolSmart program. For more information, go to http://www.solsmart.org/.

1 Solar Energy Industries Association (SEIA) and Tracking the Sun VIII: The Installed Cost of Photovoltaics in the US from 1998-2014 (LBNL)
2 Accessory uses are generally defined as uses of a property that are secondary or incidental to a primary building or use.
3 http://www.hindawi.com/journals/isrn/2011/651857/,  http://www.mass.gov/eea/docs/doer/renewables/solar/solar-pv-guide.pdf
4 American Planning Association Planning for Solar Energy Briefing Papers https://planning-org-uploaded-media.s3.amazonaws.com/legacy_resources/research/solar/briefingpapers/pdf/solarpaperscompendium.pdf