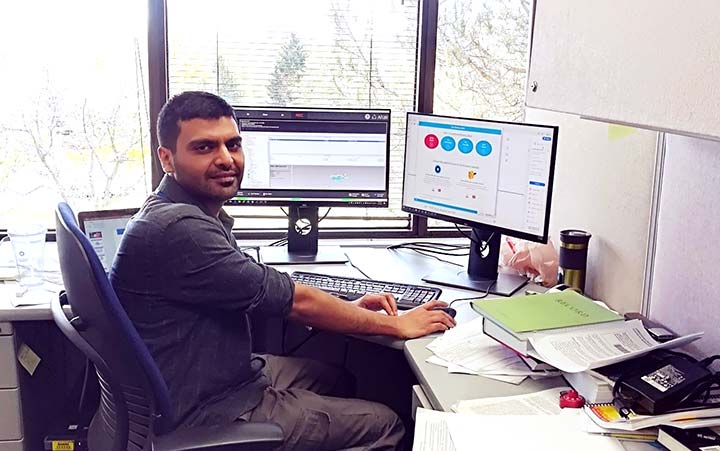 What comes first, the chicken or the egg? The classic riddle pertains more than one would think to research and development, where sometimes the most difficult challenge is choosing where to start.

Ramchandra Kotecha, advanced power electronics and electric machines researcher at the National Renewable Energy Laboratory (NREL), identified modeling as the ideal starting point in his efforts to pinpoint how best to utilize gallium oxide in power electronics applications in the absence of any real device. His efforts led to the recent publication of his research in The Electrochemical Society Journal of Solid State Science and Technology.

The Disruptive Material of the Future

Power electronics—such as inverters, converters, and chargers—are important components in electric vehicles and the electric grid. Responsible for distributing the proper amount and type of power at the right time, power electronics will be critical in the future mass deployment of renewable energy technologies—but there is a need to make the power electronics smaller, cheaper, more reliable, and yet yield higher performance.

As described in the research conducted by Kotecha, gallium oxide has the potential to be the game-changing disruptor that can improve power semiconductor devices and ultimately make power electronic devices more reliable, higher performing, and cheaper to fabricate.

“Gallium oxide is an exciting material because it has very high breakdown strength and an ultra-wide bandgap that allows it to carry more current, block high voltages, and operate at higher temperatures,” said Kotecha. “These properties could result in 10 times more performance than silicon-based power semiconductor devices.”

Currently, however, power electronics made with silicon (and secondarily, silicon carbide and gallium nitride) dominate the market; compared to silicon, gallium oxide’s cost and reliability is still not fully assessed. Kotecha hopes that  research at NREL between various centers could help close the gap and jumpstart the production of cost-effective and reliable gallium oxide products.

“We conducted a comparative modeling study for the performance of the two potentially viable vertical device architectures,” said Kotecha. “There are only a couple of labs in the U.S. who have actually demonstrated transistor functionality, but we have a way to go before we have a fabricated chip that can be evaluated for high-power switching applications.”

With this modeling study as the first step, researchers at NREL strive to fabricate and evaluate high-performance gallium oxide vertical transistors.

For Kotecha, a postdoctoral researcher who recently celebrated his one-year anniversary with the Transportation and Hydrogen Systems Center at NREL, it was important to collaborate across centers at the lab.

“When we collaborate between centers, we don’t pigeonhole ourselves into just one aspect of the research,” said Kotecha. “By working together and leveraging each other’s expertise, we can solve the larger problems for a common goal for sustainable and cleaner energy systems. The collaboration and guidance from my colleagues was critical to conduct this fundamental research on an emerging ultra-wide-bandgap material.”

In his examination, Kotecha worked with researchers from the Materials Science Center, which focuses on accelerating the industrial impact of materials science research, and the Power Systems Engineering Center, which researches high-power technologies across multiple applications.

“From the outset, researchers will be working together to make sure the devices are the best and most efficiently made for all applications,” said Kotecha. “We’ll be able to figure out what types of transistors do or do not work for certain applications.”

For Sreekant Narumanchi, team lead for applied power electronics and electric machines and co-author on the paper, the importance of the collaboration is finding material figures of merit.

“We’re looking to fabricate important power electronics packages using material other than the standard silicon, silicon carbide, and gallium nitride,” said Narumanchi. “Ram’s research efforts and collaborations will hopefully streamline that search process and get us where we need to be faster.”

“I came onboard as an electrical engineer in a sea of mechanical and thermal engineers,” said Kotecha. “They asked me to create a SPICE model, but that was impossible to do without first having a fabricated device in hand.”

To get around the issue, Kotecha used technology computer-aided design (TCAD)—a complicated, finite-element-based modeling environment— to create a model that mimicked device behavior and performance.

“Modeling has always intrigued me because you can make models as simple or as complicated as you like depending on the end goal,” said Kotecha. “Once we make our own vertical transistor device, we can modify the model to map out the different fabrication paths and to keep on improving upon both the model and the device itself.”

When considering the riddle of the chicken or the egg, Kotecha contends that with research and development, it is not always a binary choice—the model informs the prototype, or the prototype could inform the model. Either way, you constantly build on what you have. Kotecha and the team are already well underway assembling a vertical transistor device with an improved package design.

This work was funded by the NREL Laboratory Directed Research and Development Program and performed by NREL researchers.