Veterans Day is on the horizon and for many years NREL has been supporting the Department of Defense’s (DoD) energy initiatives through a large and growing body of partnership work. Resilience, in particular, has become an increasing priority for the department and NREL’s Integrated Applications Center (IAC) is uniquely poised to support the military’s goal of enhancing installation resilience. One man who played a key role in this mission is Tony Jimenez, a recently retired Army Reservist of 25 years who spent nine months working as an NREL employee embedded with the U.S. Air Force.

Tony Jimenez, an NREL engineer, stands outside the wall of the United States Army Corps of Engineers compound on Contingency Operating Base Speicher during a 2007-2008 deployment to Iraq. Jimenez’s military career coincided with his NREL career, giving him a unique perspective as he spent nine months earlier this year working at the U.S. Air Force’s Office of Energy Assurance.

With his military background and his 22 years of experience as a NREL engineer, Jimenez was a natural fit to support the Air Force’s Office of Energy Assurance (OEA), which is tasked primarily with securing and executing strategic energy and resilience initiatives. During his stint at the OEA in Washington D.C., Jimenez’s main task was to conduct preliminary assessments of potential resilience projects on Air Force installations, helping to identify installations with the most promising opportunities for third-party funded resilience projects.

Jimenez followed general guidelines when making determinations. Some opportunities made more sense than others. Installations paying high utility costs, for example, were better positioned to save money through renewable energy options, which often coincided with increased resiliency.

In other cases, leasing installation land to a utility, also known as hosting a rate-based asset, proved a viable model. In this scenario, the Air Force leases land to a utility and the utility, in turn, powers the base in the event of main grid disturbances. Jimenez identified installations located within the service territories of electrical utilities that plan to add capacity in the near- to medium-term (out to about 10 years). Naturally, mission criticality also played a key role in his decision-making.

Now back at NREL’s headquarters in Golden, Colorado, Jimenez will continue supporting the Air Force’s installation resilience efforts as part of a new agreement with the Air Force Civil Engineering Center (AFCEC).

Resilience is an important quality in military installations and decision-makers have increasingly included NREL in the development of DoD resiliency projects. Microgrid work expected to close this year at the Marine Corps. Air Base Miramar is one example. The Consolidated Utility Base Energy project for the Army is another.

Many NRELians have contributed to the capture and execution of resilience projects, but few have taken Jimenez’s route. His story is unique because his military and NREL trajectories ran parallel and to date, have spanned nearly identical periods. 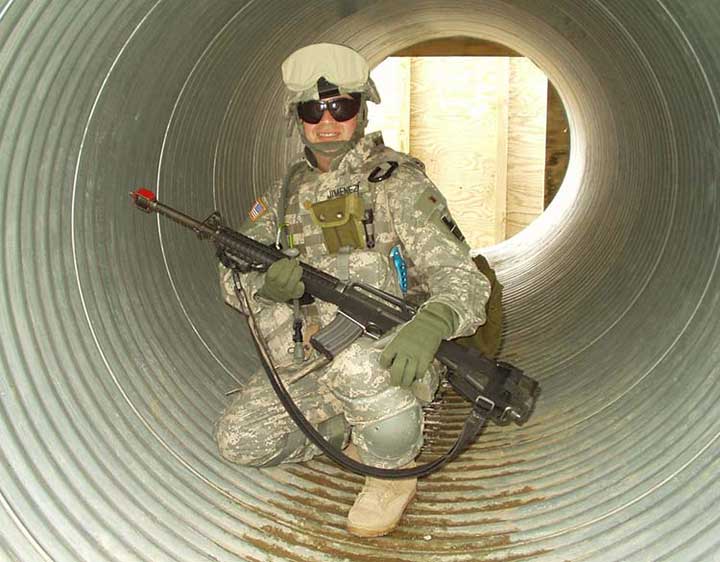 Tony Jimenez, an NREL engineer, trains for his 2007 deployment to Iraq where he served as a project manager for reconstruction projects.

Jimenez went through the Reserve Officer Training Corps (ROTC) as an undergraduate at the University of Colorado and was commissioned as a second lieutenant in the U.S. Army Reserve in 1989. Shortly thereafter, while pursuing a master’s degree in mechanical engineering at Colorado State University, Jimenez attended a presentation about the lab’s work by then-NREL researcher Larry Flowers. Jimenez immediately knew he wanted to work at NREL and set out to achieve this goal.

Since 1996, Jimenez has worked at NREL, spending most of his time at the National Wind Technology Center. Before supporting the OEA, Jimenez worked on technoeconomic modeling—mostly wind and photovoltaic systems. He also spent time running an anemometer loan program for Native American tribes.

While in the Army Reserve and working at NREL, Jimenez completed two deployments. Both, he said, complemented his work at NREL and the deployments helped him achieve success at NREL by fostering his leadership and management skills.

During his first deployment to Iraq in 2007-2008, Jimenez was a project manager, overseeing such reconstruction projects as infrastructure hardening and the building of schools and water distribution systems. He served as director of Public Works during his second deployment to Kuwait in 2014-2015, which gave him a deeper understanding of the options in meeting the energy needs of an installation, as well as experience in moving projects forward through the military procurement system.

Jimenez noted that working full-time at NREL and serving in the military could be stressful at times, but was quick to point out NREL’s support for the military and said he was always able to make it work. After 25 years of honorable military service, Jimenez retired from the Army Reserve in 2016.