The National Renewable Energy Laboratory's (NREL's) Technology Transfer Director Anne Miller enjoys the drive out to Denver International Airport (DIA)—but not because of her destination. Instead, she has been fascinated to watch as the Peña Station NEXT zero energy campus emerged from the high plains near the airport.

The change—like so many others—was enabled by a partnership with NREL. The U.S. Department of Energy (DOE) national laboratory already has some 850 active partnership agreements with more than 500 partners in industry, government, and academia.

In the case of Peña Station NEXT, Xcel Energy and Panasonic announced in July 2017 a collaboration with NREL, DIA, and LC Fulenwider, Inc. to study the implementation of a carbon-neutral energy district master plan near the airport. "I always get a charge out of it," Miller said. "At NREL, we heard about this project in the design stage, partnered, and now it's taking shape. That's pretty exciting."

During an 18-month project completed last fall, NREL staff combined the laboratory's building energy system model, URBANopt, with grid modeling software, OpenDSS, to model the interaction of the district with the grid.

"We produced a number of different designs for the system," said NREL researcher Bri-Mathias Hodge. "We were able to show the trade-offs between the economics of the system and the reliability of the system," he said, by citing different uses of energy technologies—such as energy storage, photovoltaics (PV), and energy efficiency—in the modeling.

The NREL team used the unique visualization tools at the laboratory's Energy Systems Integration Facility (ESIF) to allow the stakeholders to react together to the various scenarios. The results were unprecedented insights for the project backers.

"Panasonic, Xcel, and Fulenwider partnered with NREL to push the boundaries of net-zero energy design and energy affordability in the built environment by understanding the technical and economic feasibility of turning the entirety of Peña Station NEXT into a zero energy district," said Panasonic's Peter Jacobson. "What resulted was a unique visualization tool combining building energy modeling with power distribution modeling that analyzes net-zero energy design on a sub-hourly basis."

That transformation is only one of many that NREL's partnerships impacted. From a novel wind-modeling tool tested with a Danish wind turbine manufacturer along Colorado's Front Range, to a high-performance computer breakthrough in the ESIF, to cleaner air at the Port of Long Beach in California, NREL and its partners are remaking the landscape.

"It was always in the NREL culture to have that outside engagement. It's in our DNA," said Bill Farris, NREL associate laboratory director for innovation, partnering, and outreach.

A little more than a decade ago, under the management of the Alliance for Sustainable Energy, LLC (Alliance), NREL's outreach accelerated. During that period, the laboratory has received approximately $440 million of new, funds-in funding from new partnerships that have a total agreement value of $770 million. In Fiscal Year 2018 alone, NREL totaled 272 new partnership agreements worth a total of $70 million.

NREL Deputy Associate Laboratory Director for Scientific Computing and Energy Analysis Doug Arent said the transition that began under the Alliance in 2008 was notable. "We had a vision about what the value of partners meant, and had some commercial partners then," but leadership started thinking about working with a whole suite of partners.

Aside from this commitment, another reason for this decadelong increase is that NREL is one of three applied energy national laboratories. "I don't think people realize how unique we are," Farris said. "Pound for pound, NREL does more partnership work than any laboratory in the DOE system." Researchers at NREL work in both early-stage R&D and commercial development.

"We have technology in things you use every day. No other lab can say that," Farris said.

A heightened emphasis on innovation has led to a leap in records of invention. Ten years ago, NREL researchers averaged 40 invention disclosures per year. Last year, the laboratory had more than 200, even though the number of staff had only doubled. As awareness of such trends grows, so has the range of partnerships.

"There's really been an uptick in terms of both volume and the quality of relationships we've established," Miller said. "People come to us for innovative approaches to solving problems as well as inventions with commercial potential. Records of invention are one metric to look at."

It's a long way from Golden, Colorado, to California—but word of NREL's expertise has reached the Port of Long Beach.

"The collaboration with the Port of Long Beach has only grown stronger over the years as NREL has become a trusted energy adviser and independent voice in their decision planning process," said NREL Capture Manager Brett Oakleaf.

Further west, NREL has advanced clean energy in Hawaii. The Hawaiian Electric Companies used the results of NREL's work to file with the state's public utilities commission to allow a higher penetration of distributed solar PV systems than was previously allowable. This boost will lead to more than 15 megawatts of additional PV on rooftops in Oahu than would have been the case before NREL's assistance.

Another classic example is NREL's pairing with Hewlett Packard Enterprise (HPE). Together, NREL and HPE persevered through ups and downs to create Peregrine, a supercomputer at NREL that uses warm water to cool its servers, and then reuses that water to heat the ESIF. Peregrine was so successful that it earned HPE and NREL an R&D 100 Award in 2014. "We shared risks and changed an industry," said Steve Hammond, director of NREL's Computational Science Center, in 2017.

Then, in August 2018, HPE announced that it would build a new supercomputer for NREL that would be even more energy efficient and 3.5 times more powerful than Peregrine. As HPE said in its news release, "Through collaborative efforts with NREL, from an initiative to enable data centers with hydrogen fuel cell to the new Eagle system, HPE is powering smarter, energy-conscious data center environments."

NREL still maintains strong partnerships in its core technologies such as wind energy and solar power.

For example, the laboratory and partners in the wind industry can use the NREL-developed Wind Plant Integrated System Design and Engineering Model (WISDEM), a set of models for assessing overall wind plant cost of energy. Last fall, NREL completed a project to benchmark and validate WISDEM against wind energy company Vestas' internal cost models for the tower and the plant using data from two Vestas wind power plants.

And Miller notes that the laboratory's expanding expertise in the study of perovskites as a material for use in solar panels make NREL a strong candidate for teamwork in that rapidly expanding market.

The Future of Energized Partnerships

NREL continues to explore new opportunities and pathways. In 2018, NREL and Eaton, an international power systems company, took steps to allow their longtime partnership to blossom in new ways, ultimately deciding to embark on a new model of co-location, which brought an initial group of Eaton employees to their new home in the ESIF. 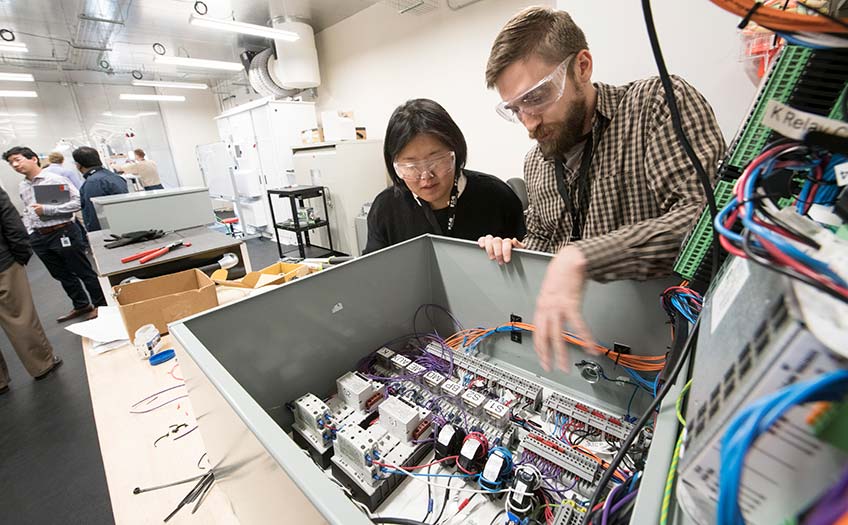 Eaton researchers Yi Yang and Sean Ketring work on a hardware prototype in their lab in NREL's ESIF. Photo by Dennis Schroeder, NREL

"We weren't afraid to try something that hadn't been done before," Farris said. "Figuring out how to get 15 Eaton staff embedded inside ESIF and giving them access here; that really showed we were serious about working with industry in new ways and being creative and not afraid to try something new. That's traceable back to NREL Director Martin Keller."

The laboratory has set its sights on hitting $100 million in new annual partnerships. That's a heady number, but it's not just a goal for dollars' sake. It is part of NREL's mission to advance renewable energy and energy efficiency technologies. Such an approach also has long-term strategic benefits. "There's a mutually beneficial cycle," Miller said. "We help companies have impact, but at the same time, we gain insight into real-world problems that they are grappling with."

And those problems are evolving—which is why they keep coming to NREL's door. "The products and services companies are selling today are different from 10 years ago and they'll be different 10 years from now," Farris said. "The average person may not see it. Sometimes it's hard to recognize because we're right in the middle of it, but we are in an energy transformation."

NREL has many more high-impact partnerships in the works. Partners such as major industrial companies; federal, state, and local governments; and philanthropic organizations are all seeking access to the unique capabilities of NREL to address emerging energy challenges.

For anyone driving to DIA, visiting Long Beach, vacationing on Oahu, or accessing the cloud, the changes are becoming increasingly visible.