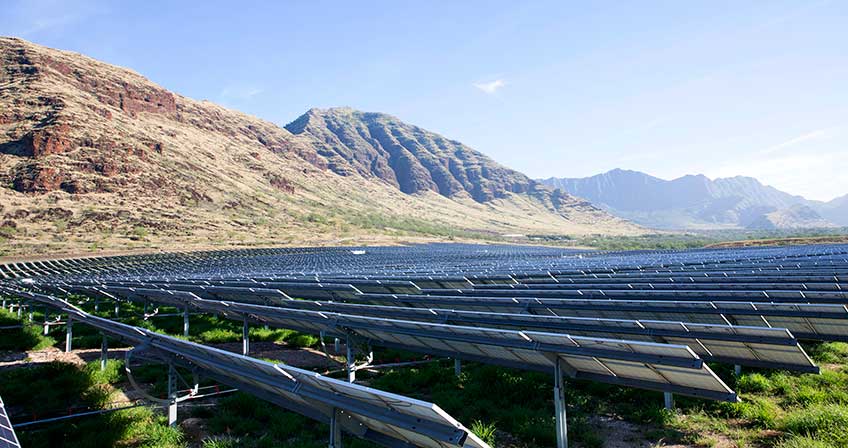 The 27.6-MW Eurus solar array on the island of Oahu, the largest solar project in Hawaii, came online in 2017. Photo courtesy of Hawaiian Electric Companies

With the highest levels of renewable energy, largest percentage of citizens with rooftop solar, and the nation's most ambitious electricity goal—100% renewable by 2045—Hawaii is ahead of the curve in the evolution of energy systems. And, with great renewable power comes great responsibility. To ensure the islands' six isolated electric grids can continue to provide reliable service to customers, Hawaii is implementing emerging technologies and overcoming unprecedented grid integration challenges.

"There's no playbook," said Colton Ching, Hawaiian Electric senior vice president of planning and technology. "There are no data or lessons learned that we can refer to because there hasn't been a renewable energy transformation at this scale before. There are gaps and issues that we know we need to solve for, so we're relying on ourselves and our partners to help us achieve our goals."

"For Hawaiian Electric, it's about more than just meeting the state's requirements," said Laboratory Program Manager for NREL's Energy Systems Integration Facility (ESIF) Martha Symko-Davies, who has worked closely with the utility for several years. "They genuinely want to tackle this challenge, and they want to make sure they're doing it the right way: with an eye toward the future of the state and its energy systems."

Turning the Boat to Chart a New Course 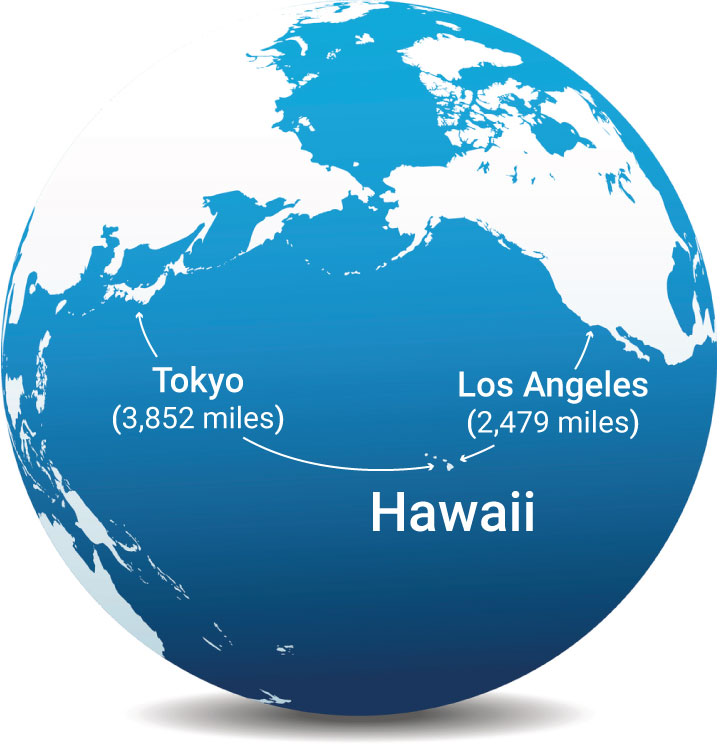 The Hawaiian Islands are the most remote islands on the planet. Moving to renewables will greatly increase the state’s energy independence. Graphic by iStock

For decades, Hawaii generated almost all its electricity from petroleum imported from Southeast Asia and the Middle East by way of a more than 2,500-mile supply chain.

"Hawaii is geographically isolated from pretty much everyone else," Ching said. "Our reliance on oil makes energy expensive, which makes everything expensive. We're often at the mercy of oil suppliers and Mother Nature, which makes the state vulnerable in terms of our economics and energy security. We're not going to completely eliminate that vulnerability—it's part of living on the most remote islands on the planet—but we think moving to renewables can have a huge impact toward making the state's economy less susceptible to the risks associated with importing fossil fuels."

"The state is proud of its cultural traditions," explained NREL Senior Electrical Engineer Andy Hoke, one of the key NREL team members partnering with Hawaiian Electric. "The Hawaiian community has a preference for things that are locally sourced, including its energy."

This shared community value, Hawaii's small geographic size and population, abundant renewable resources, and political will to transform its energy economy are making the state an ideal candidate to pilot a large-scale transition. Like a boat navigating rough waters, Hawaii is susceptible to the instability of even the smallest of waves, but also agile enough to chart a new course—one that larger ships might be able to follow.

The Hawaii Clean Energy Initiative was launched in 2008 with an ambitious vision: meeting 70% of the state's energy needs through energy efficiency and renewable energy by 2030. Ten years later, with the help of Hawaiian Electric and other stakeholders, the state has significantly outdistanced its initial interim targets and now sets the bar even higher, aiming to become the first U.S. state to meet 100% of its energy needs for electricity with renewables.

"NREL helped us get a handle on the potential for each island to host different types of renewable energy, which allowed us to look at different long-term scenarios for how we could get to 100%," Ching said. To assist the utility with modeling potential renewable additions, the laboratory aggregated hourly solar and wind power time-series data for individual islands, drawing on the National Solar Radiation Database and Weather Research and Forecasting model. NREL also reviewed the utility's technology cost assumptions and compared them to NREL's Annual Technology Baseline and Standard Scenarios.

"What we learned was that the most cost-effective way to provide renewable energy over time would be to deploy renewable generation ahead of the state's required milestones," Ching said. This led Hawaiian Electric to announce a new goal of reaching 100% by 2040, five years ahead of the state's mandated timeline.

"We knew our customers have a strong desire to get more control over their electric bills by installing their own solar systems," Ching explained. "We had to make sure that any plans we developed to meet our goal included not just large renewable generation but also the choice for customers to deploy and interconnect their own energy systems."

The programs and incentives were so popular that they helped create a local market for distributed generation—and growth greatly outpaced the utility's expectations. Hawaiian Electric became concerned about the ability to maintain safe and reliable electrical service, particularly on the island of Oahu, which consumes 70% of the state's energy.

The utility was in uncharted waters. As the technical questions accumulated alongside backlogged interconnection requests, Hawaii's Public Utility Commission had no choice but to instruct Hawaiian Electric to limit the amount of solar-generated power on any Oahu distribution line. They needed a solution—fast—and NREL was there to help.

Rowing in Partnership: One Boat, Many Oars

Hoke and other NREL engineers worked with Hawaiian Electric, SolarCity, the Forum on Inverter Grid Integration Issues, and manufacturers to test four emerging "smart" inverters under various transient over-voltage scenarios on a simulated Oahu grid. "The unique simulation capabilities of NREL's ESIF were critical in helping us identify and meet our transient over-voltage requirements," Ching stated. "No one in industry at the time was quite certain how their inverters would perform for this specific operational issue. NREL's work really advanced industry's understanding of what inverters can do."

The team found that all four products responded quickly to transient over-voltages by cutting their output, demonstrating that, when smart inverters are installed, voltage spikes pose less of a problem than originally feared. This work gave the utility the technical information needed to lift restrictions on Oahu's distribution lines and provide customers with guidance for installing and configuring their choice of the NREL-vetted smart inverters, or performing similar tests to self-certify other inverter models—at least until the test is incorporated into national standards. In fact, the utility felt confident in more than doubling the amount of distributed solar on the grid, allowing it to clear a queue of nearly 2,500 customers waiting to connect their rooftop systems. 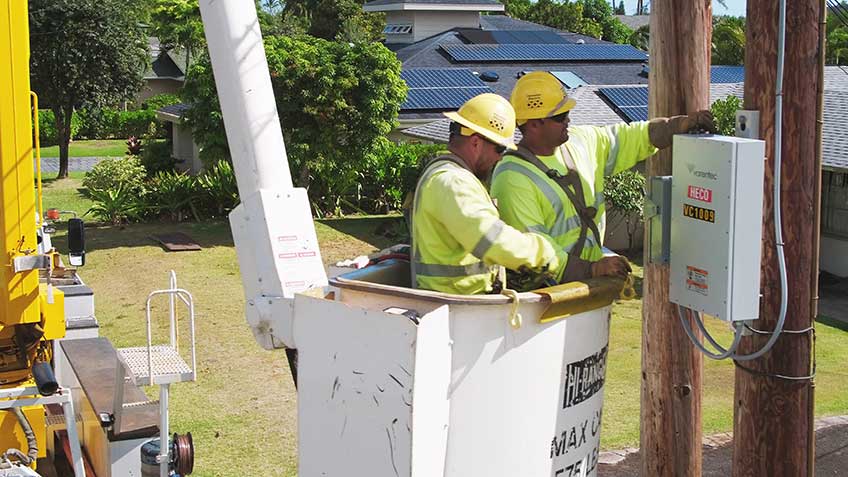 However, another challenge remained: Hawaii's energy system was evolving past existing electrical safety codes and standards for interconnecting distributed energy resources, so expedited solar interconnection rules specific to the state were needed. And with that challenge came opportunity. The tests and standards that NREL and others helped establish in Hawaii are now informing the development of Institute of Electrical and Electronics Engineers (IEEE) and Underwriters Laboratories (UL) codes. For example, IEEE and UL are now preparing to include over-voltage protections in their smart inverter standards.

In addition to helping manufacturers ensure the broadest possible range of their products are usable for customers in Hawaii's still-expanding solar market, this standards "preview" should also help them prepare for the needs of emerging markets elsewhere, ultimately enabling deployment of renewable energy resources throughout the United States.

Looking Beyond the Horizon

Now, the Hawaiian Electric Companies are working proactively to modernize their grids. "We're finally to a point where we're able to look over the horizon," Ching said, "to break through the near-term barriers and start looking further into the future." And NREL is still on board.

Read Part 2 of this story to learn how NREL and the Hawaiian Electric Companies are evaluating energy trends and simulating future grid scenarios to ensure stability—and how their findings could help other islands, and even mainland states, apply similar solutions.

ESIF is one of the only megawatt-scale research facilities in the United States that enables integration studies at full power and actual load levels in real-time simulation. It is designed to be a connecting point for industry, academia, and government to work together to solve some of the most complex and important global challenges of our time.