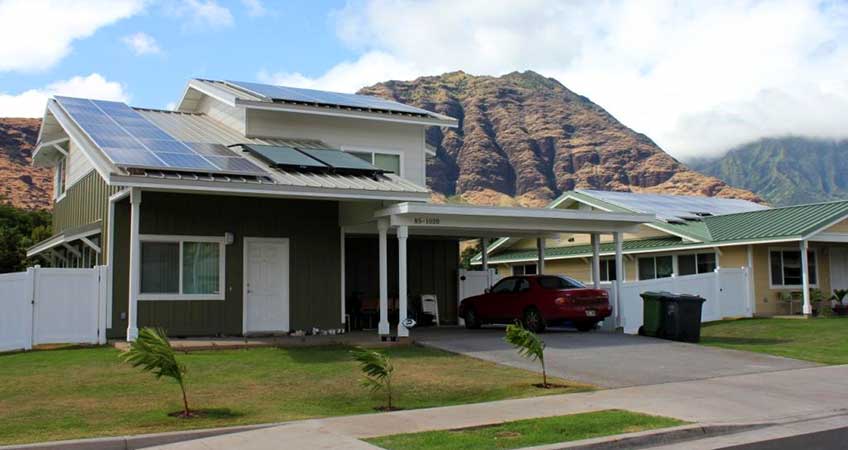 As you read in Part 1 of this story, NREL helped the Hawaiian Electric Companies respond to new stability challenges associated with the rapid addition of solar power and other renewables to Hawaii's six isolated island grids. Now, the utility is working proactively to modernize those grids. Hawaiian Electric senior vice president of planning and technology Colton Ching says, "We're finally to a point where we're able to look over the horizon, to break through the near-term barriers and start looking further into the future." And NREL is still on board.

For one project, NREL Engineers Andy Hoke and Julieta Giraldez ran simulations of smart inverter grid support functions on simulated island grids. Particularly useful for this work was the Energy Systems Integration Facility's (ESIF's) power hardware-in-the-loop capability. NREL's ESIF was one of the first facilities capable of running these simulations at megawatt scale, allowing researchers and partners to conduct integration tests at full power and actual load levels to evaluate component and system performance before changes are implemented in actual energy systems.

Giraldez also led a Voltage Regulation Operational Strategies (VROS) project. This work involved the detailed simulation of Hawaiian Electric's distribution systems integrating multiple grid technologies (such as energy storage, solar generation, and electric vehicles) to quantify impacts of inverter functions on both grids and customers. The project has led to recommended approaches that industry—in Hawaii and elsewhere—can use to implement and scale smart-inverter grid support functions.

A decade ago, Hawaii imported 90% of the energy it consumed, mostly as petroleum.

While Hawaii's initial renewable energy vision was considered ambitious at the time (2008), the state has significantly outdistanced those targets and has adjusted its goals accordingly.

An NREL report on this work provided the primary technical information and recommended inverter settings necessary to justify activation of a specific grid support function called "volt-var control" for all new solar photovoltaic (PV) systems in Hawaii. This made Hawaiian Electric the first utility to activate volt-var system-wide, which reduced over-voltages and further increased the number of rooftop systems that could be interconnected. The simulations also quantified, in detail, the impact of volt-var and other grid support functions on annual customer PV production, finding the impacts to be minimal for most customers, even in very high PV penetration scenarios with all customers exporting power.

"This was the first time any project at this scale was so motivated by the customer's interest," Giraldez said. "Not only did we confirm that smart inverters can help prevent grid instability, increasing the reliability of the distribution system—we learned something about the impact that advanced inverters can have on the customers' energy production." Distributed solar wasn't a liability for reliability after all—and it could actually be an asset for grid stability at a minimal loss of solar energy production for the customer.

A Glimpse at the Grid of the Future

NREL is working with Hawaiian Electric on an ongoing basis to verify that data from actual distributed solar systems matches the data obtained from the simulated grid environment. A small group of island customers are participating in a pilot study that allows NREL to control their smart inverters remotely to determine if different modes of operation yield better results. NREL is also helping model the potential grid impact of adding customer-side storage to rooftop solar systems—a scenario that could soon become the norm as storage system costs continue to drop—along with the capacity of Hawaii's grids to absorb additional mid-day PV power.

Plus, Hoke says that as Hawaii gets closer to having instances of 60% or 70% renewable energy on the grid at any one moment, NREL is helping adjust the way Hawaiian Electric operates its grids so that all smart inverters "play nice" with legacy fossil fuel-powered generators still operating on the system. "When California has too much solar power on its grid, it can just send some of that electricity to a nearby state," Hoke said. "That's just not possible for Hawaii with no interconnections among islands, much less to mainland utilities." 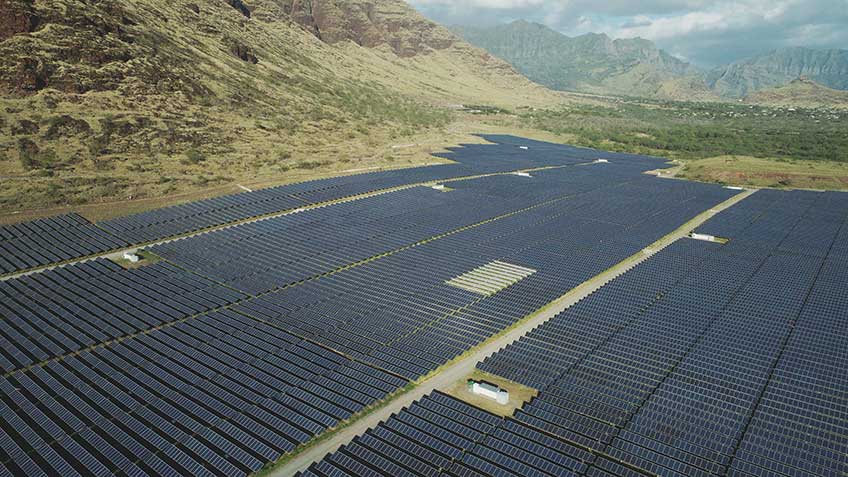 The 27.6-MW Eurus solar array on the island of Oahu, the largest solar project in Hawaii, came online in 2017. Photo courtesy of Hawaiian Electric Companies

In an 18-month project funded through the U.S. Department of Energy's (DOE's) Grid Modernization Laboratory Consortium titled "Grid Frequency Support from Distributed Inverter-Based Resources in Hawaii," NREL and Hawaiian Electric—along with partners Sandia National Laboratories, Enphase Energy, and Fronius USA—are taking a step back from individual grid components and looking at architectures for controlling and operating thousands of grid devices.

"This is something we've been worried about for some time," Ching explained. "Let's say every one of our customers eventually has at least one grid-connected device. How do we operate all those devices as a system? The traditional way to think about it is to have every point communicate back with the 'mother ship'—but to create a communications network that has the ability to monitor and make decisions for thousands and thousands of devices probably isn't the most cost-effective approach."

Instead, Hoke is looking at control architectures that allow individual devices to respond autonomously to local measurements such that the aggregate response tends to help stabilize the grid.

From Real-Time Impact to Replicable Framework

To ensure critical milestones are met, information is moving between the laboratory and decision-makers in record time. "Our work is directly impacting how Hawaii operates its grids, almost in real-time," Hoke said. "We answered questions, that information was filed with the Public Utility Commission, and then the changes were made days later," Giraldez added. "I'd never worked on research that was so immediately impactful."

"The challenging time frames, in a way, are also what has made this work rewarding," Ching said. "This isn't just a research project or academic exercise resulting in a published article. At the end of the day, this work is informing us so that we can make good business decisions and provide more options and create more value for our customers right now."

This real-time impact in Hawaii means that the playbook Hawaiian Electric didn't have when it embarked on its journey is now, thanks in part to the utility's example, available to other island communities. In fact, as part of DOE's Energy Transition Initiative, NREL developed and maintains the Islands Playbook, a step-by-step, action-oriented guide that provides a replicable framework for energy transition—including lessons learned from the laboratory's work in Hawaii. 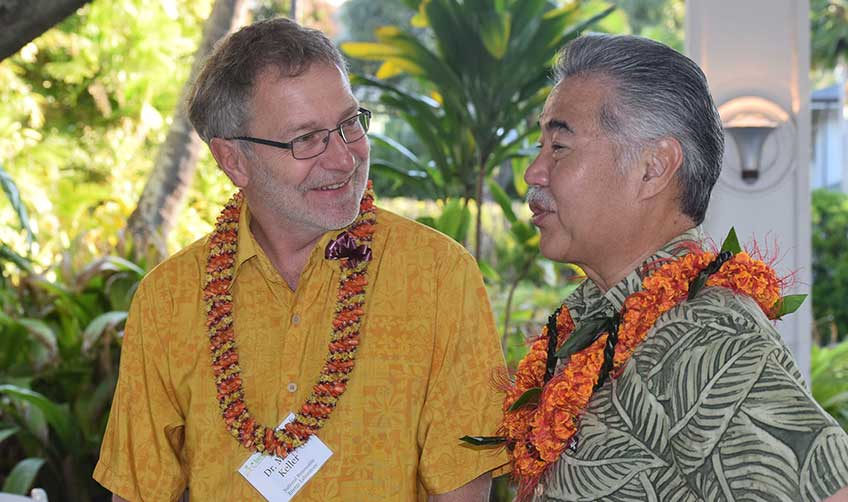 NREL Director Martin Keller speaks with Hawaii Governor David Ige at a ceremony honoring the 10th anniversary of the Hawaii Clean Energy Initiative, launched in 2008 with an ambitious vision: meeting 70% of the state's energy needs through energy efficiency and renewable energy by 2030. Since then, with the help of NREL, Hawaiian Electric, and other stakeholders, the state has significantly outdistanced these initial targets. Photo courtesy of Hawaii's Department of Business, Economic Development, and Tourism

For Martha Symko-Davies, NREL's laboratory program manager for the ESIF, the implications of this work go even further than island communities. "NREL focuses on nationally scalable, integrated projects," she said. "We've helped Hawaii integrate not just solar, but also storage, electric vehicle infrastructure, and more. If this can be done in Hawaii, it can be replicated anywhere else—the question is not 'if' we can do it, it's 'how' we can do it. How do we apply the solutions we've helped implement in Hawaii and translate those solutions into ones that can work in other, mainland states?"

The laboratory is already starting to answer this question. NREL Engineer Adarsh Nagarajan, a member of the VROS project team, is further expanding and leveraging advancements in grid support models for use in California. In September, California utilities began allowing homeowners to interconnect distributed generation systems using smart inverters. The Sacramento Municipal Utility District (SMUD) is also planning to use NREL's VROS findings to inform a pilot program to accelerate the adoption of advanced inverters in SMUD's service area. Other California utilities such as San Diego Gas and Electric have referenced NREL's work to support the activation of inverter grid support functions, a step that California Public Utility Commission staff have recommended in a pending resolution for adoption.

"There was more urgency for Hawaii to start its energy transition, which meant it needed to coevolve with the emerging technologies necessary for that transition to happen," said Hoke. "Now, there are even fewer barriers for other states to proactively prepare for future energy scenarios. The sooner a state can move in this direction, the easier its transition will be."

When that happens, NREL and the ESIF will be ready with the latest resources and capabilities.

ESIF is one of the only megawatt-scale research facilities in the United States that enables integration studies at full power and actual load levels in real-time simulation. It is designed to be a connecting point for industry, academia, and government to work together to solve some of the most complex and important global challenges of our time.