How Will Wind Industry Find the Answer? With WISDEM 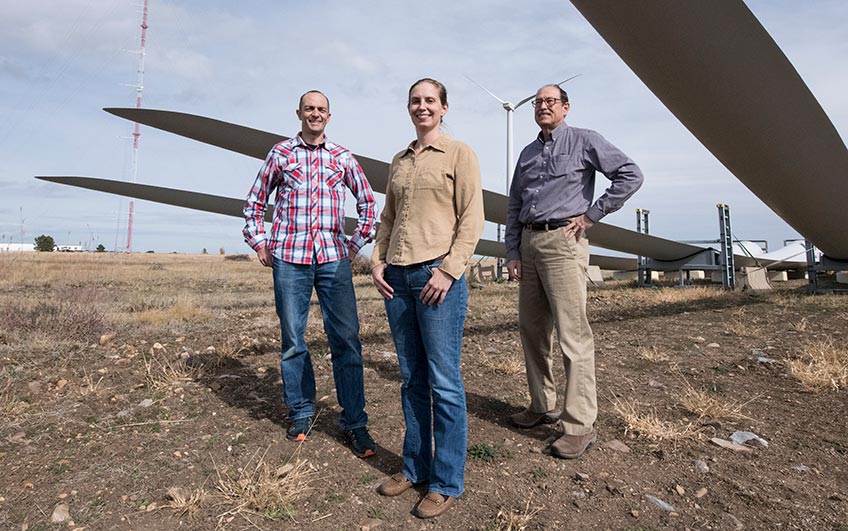 "Thankfully, I haven’t seen it in a while," said Dykes, who joined the U.S. Department of Energy's (DOE's) NREL in the summer of 2011 and now works as a senior engineer at the NWTC.

From there, Dykes has spread the word throughout the wind industry about systems engineering. This interdisciplinary approach takes everything into account so that customer needs and wind turbine design, performance, and cost are all equally important.

From her first experience at the NWTC—and her own presentation at the initial workshop—Dykes has emerged as an important figure and hosts what is now known as the biennial NREL Wind Energy Systems Engineering Workshop. Her boss, NWTC Chief Engineer Paul Veers, credits Dykes with educating the industry about a topic that was once a head-scratcher. "No one's asking what systems engineering is anymore," he said. "Everyone is eager to be a part of it."

That's easier than ever, thanks to software created by Dykes, Veers, and others at NREL. WISDEM—an acronym for Wind Plant Integrated Systems Design and Engineering Model—is open-source software that answers the "what if" questions. What happens if the blades are changed? What would occur if the rotor was designed differently?

"We are really trying to look at fundamental physical relationships between the wind that's blowing and the amount of strength you need in a blade to resist the forces that apply, all at a very fundamental level—and yet have it flexible enough that you can still dial in some innovation," Veers said. "Understanding that merger of specificity and complexity is what makes this such a huge challenge and an amazing thing that Katherine has done to create something that functions in that space." 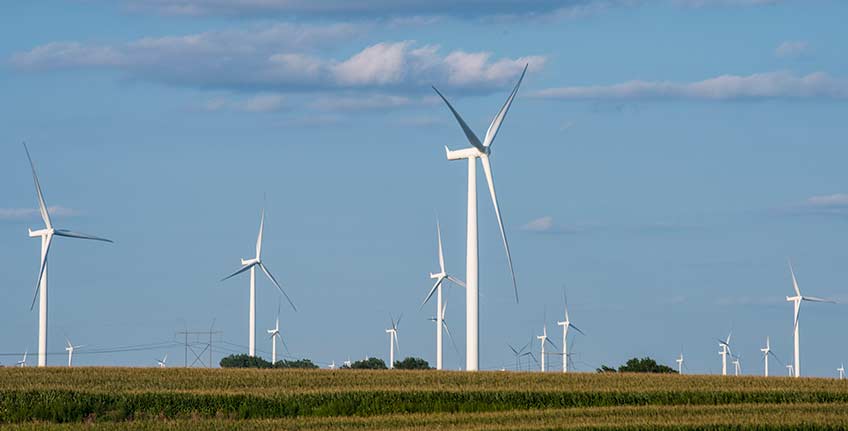 Software Contains 'All of the Elements'

Rick Damiani, another senior engineer who joined the NWTC in 2011, had worked as a consultant to the wind industry for 15 years before joining NREL. He said manufacturers use propriety software, especially for the turbine design, that may be more sophisticated, "but there isn't one piece of software that has all of the elements that WISDEM has, which include the rotor design all the way to cost-modeling a wind plant."

Of all the electricity generated in the United States, wind produces about 7.6%, a number that has crept upward over the past decade. At the same time, the height of wind turbines also has increased. Taller turbines with longer blades can generate more power than earlier models. The evolution of the industry makes problem-solving software such as WISDEM even more important.

"My experience has been that the maturation of the wind business has come from lots of little pockets of innovation," said Veers, who previously served as editor of the international journal Wind Energy. "If you go back 30 years or more, the entire enterprise was viewed as an aerodynamics problem."

That created additional problems. If wind turbines were optimized based on aerodynamics and then designed for structural capacity, Veers said they were either too stout and overly heavy or they tended to experience structural failure. Designers realized the need to consider both aerodynamics and structures simultaneously.

The industry woke up to the need to look at more than just the blade design or turbine construction and took the first step toward a systems engineering perspective. The entire system needed a closer look: rotor, drivetrain, tower—everything needed to be considered.

Veers, who joined NREL in 2010 (several months before the first workshop), found that NREL had a vision for bringing systems engineering to the wind industry. The laboratory had funds to "dabble a bit in the area," he said, which meant holding that initial gathering and scoping out possible opportunities. "It really took off once we hired Katherine. That's really why she owns this success."

In 2015, Dykes and Damiani completed a DOE program called Lab-Corps (now Energy I-Corps). Their efforts during the six-week "entrepreneurial boot camp" focused on moving WISDEM beyond NREL and into the marketplace. "The potential users are quite diverse," said Dykes, who holds a Ph.D. in systems engineering from the Massachusetts Institute of Technology. "They really cover the value chain for the wind industry: your component suppliers, turbine manufacturers, developers, owner-operators, and consultants."

"You can plug in your own module and rely on some of the other modules in there," Damiani said. "OEMs"—original equipment manufacturers—"can take out the turbine modules in there and still use a wind plant optimization module or a cost model."

Still, the software has limitations. Damiani, who wrote some of its submodules, said WISDEM is a research tool and "not something people can use very easily outside the lab. It hasn't been upgraded to the level of a commercial type of software where you can just install it and play with it. It takes a lot of effort." So far, WISDEM lacks a graphical user interface. 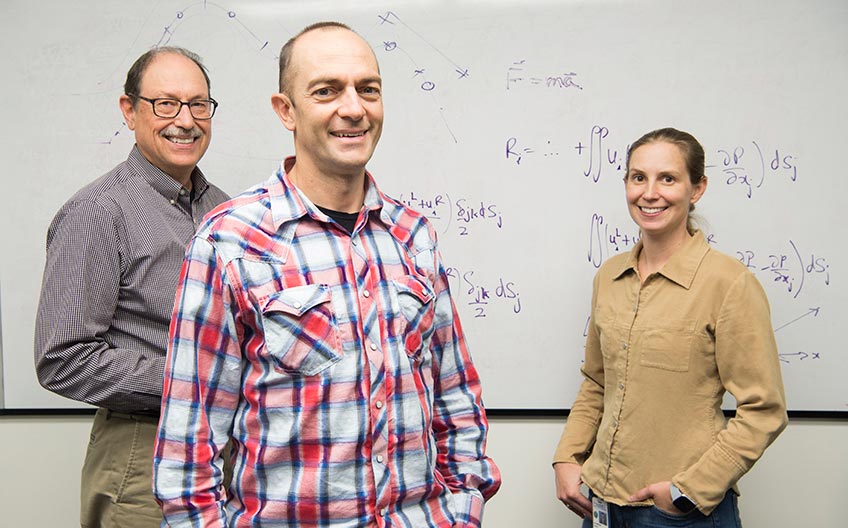 Framework Built on What NASA Developed

WISDEM is based on an open-source computing platform for systems analysis called OpenMDAO (the acronym stands for Multidisciplinary Design Analysis and Optimization). Developed by NASA and written in the Python programming language, OpenMDAO allows users to consider hundreds of thousands of variables.

"What we're doing with WISDEM is trying to assess things from an integrated plant perspective," Dykes said. "So, if you have a new technology, a new operational or control strategy, how will that impact the whole plant performance, cost, and potentially other system metrics?"

The modules that constitute WISDEM can be incorporated into a company's propriety software. One company is using WISDEM to test what effect adjusting individual turbines has on energy production.

Wind farms can suffer from wake effects, which happen when downwind turbines operate less efficiently because most of the wind has been intercepted by the upwind turbines. The software allowed the company to test the idea of steering individual turbines to increase production.

"Using this MDAO framework and this systems engineering approach to look at innovation options is really fairly advanced in the world," Veers said.

He ticks off a list of questions WISDEM can help its users answer: "What if I could steer the wakes of a wind plant and find the optimum solution for designing the whole plant around the capability? How much do I get out of that? What if I could build a wind plant with towers of different heights? Or a plant that has different kinds of machines? Answering questions like that was essentially impossible in the past."

But with WISDEM to provide answers, the industry should see the value of doing things differently and adopt products and practices that, Veers said, "will reduce costs and increase value down the road—that will make wind a much more attractive resource."

Dykes is quick to share credit for the success of WISDEM. "There has been a large number of people involved with pieces of its development," she said. "We've had folks from the plant modeling and the control side, from the rotor design, the drivetrain design, electrical design, offshore support structures, cost models, cost analysis. People with all these different areas of expertise have contributed to the different module development and integration into WISDEM. To do systems engineering work, you need expertise from across many different specialties."

In addition to colleagues at NREL, Dykes drew expertise for WISDEM from researchers at Brigham Young University's Department of Mechanical Engineering and the Technical University of Denmark's Department of Wind Energy.

Soon, WISDEM will be used in a newly funded project at NREL to determine the optimal design for a hybrid power plant—one that produces electricity through a mix of renewable resources such as wind and solar.

Since the first Wind Energy Systems Engineering Workshop, three more have been held—the most recent of which moved beyond Colorado to Europe, where it was jointly hosted by NREL and the Technical University of Denmark's Department of Wind Energy. With each workshop comes new knowledge about the intersection of systems engineering and wind energy.

Dykes remembers the first gathering as small with "very little understanding of really what this was all about." The latest workshop attracted more than 100 people, half from industry. "We've seen a huge growth in this area in the last 5–10 years for sure," she said.