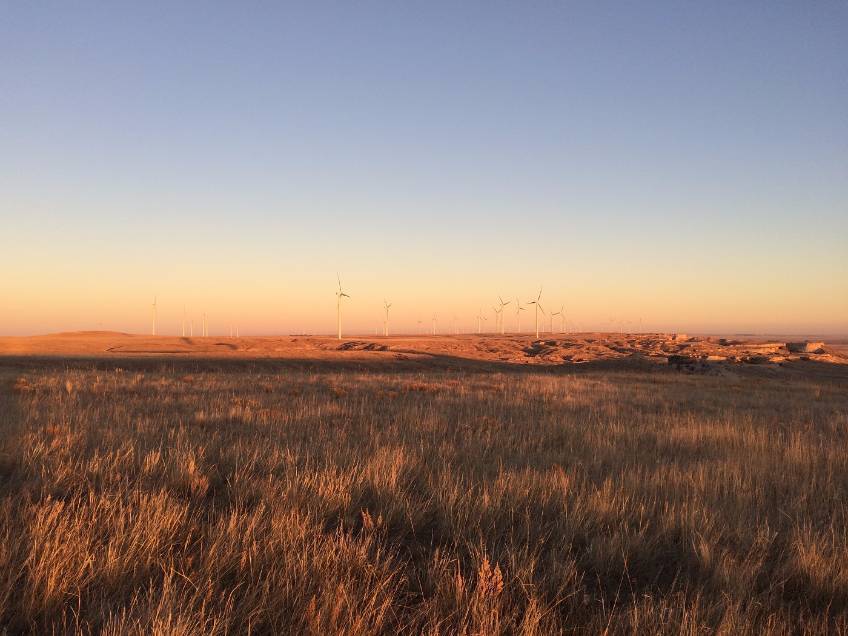 The team will develop the first commercial tests of NREL-developed modeling and optimization software that is designed to provide a detailed overview of wind plant operations and allow steering of individual turbines.

A successful test promises a big payoff: engineers expect to see an increase in the annual energy production and revenue at Peetz Table Wind Energy Center (PTWEC), where the software will be tested.

Wind plants sacrifice up to 20% of their gross energy production to wake losses, or weaker turbulent winds created by upstream turbines. Because most modern turbines are designed to maximize their own production, a plant’s first row of turbines receives a significant amount of energy from incoming winds. However, the rest of the farm’s turbines become less efficient. As a result, wake steering can be used to turn upstream turbines away from the wind inflow to decrease the overall efficiency loss.

“Annual energy production has always been a focus for the wind industry,” says Dan Brake, the senior director of renewable engineering at NextEra Energy. “Understanding current wind conditions throughout a wind energy center has been challenging, although the industry recognizes waking contributes significantly to lost revenue. The wake steering technology is expected to allow turbines to operate more efficiently based on the energy already available in the wind.”

With this model, engineers and plant officials can individually monitor each turbine, making WISDEM an ideal choice for developing and optimizing a control schedule for wake steering testing at PTWEC.

“The potential impact of this technology is important in many ways,” Kiles says. “It could drive intelligence through data for most stakeholders in the wind industry and create better understanding of opportunities, requirements, and impediments throughout the value chain.”

Wind tunnel experiments and simulations have already proved the potential of wake steering. Using plant-level controls, like those that will be tested at the PTWEC, promises to dramatically improve overall output by directing wake steering in individual turbines.

Using a small set of PTWEC turbines, the NREL and NextEra teams will test and analyze the impacts of wake steering on overall performance and individual turbine loads, thereby clearing a path for further commercialization and industry adoption.­

“Knowing what is happening at every instant in every location and articulating knowledgeable decisions through powerful analytics should open new directions and powerful, creative ideas while minimizing risk,” Kiles says. “It is just a really ‘big idea’ nicely deployed in a very practical manner by a great team.”

Engineers expect to see the plant’s energy production increase by a few percent—which could have major financial impacts. Even small efficiency improvements can boost annual profits by hundreds of thousands of dollars, depending on the plant size and design.

And there could not be a better partner for early-stage testing: NextEra Energy Resources, a subsidiary of NextEra Energy, Inc.. The company generates more solar and wind energy than any other firm in the world—including more than 12 gigawatts of installed wind energy capacity.

NextEra’s expansive wind fleet and breadth of experience provides NREL researchers and engineers with valuable data and practical insight regarding large-scale implementations of WISDEM and wake steering. And the benefits are mutual: NREL’s research will improve plant production and revenue.

“We are excited to combine NREL’s sophisticated modeling and analysis techniques with our real-world expertise,” says Brake. “A successful roll-out of this technology could yield several potential benefits, including the reduction of energy losses from waking and a net increase in the amount of energy and revenue that can be generated from a given wind farm.”

The team expects to begin their field test campaign in early 2017.