An NREL grid integration study has confirmed the technical and economic viability of integrating 175 gigawatts (GW) of renewable energy into India's electricity grid by 2022. 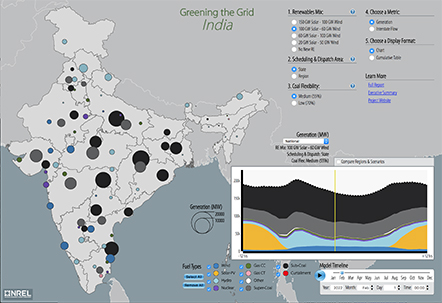 The visualization of results shows a full year of generation and transmission flows.

The two-volume report Greening the Grid: Pathways To Integrate 175 Gigawatts of Renewable Energy into India's Electric Grid Vol. I—National Study and Vol. II—Regional Study resolves many questions about how India's electricity grid can manage the variability and uncertainty of India's 2022 renewable energy (RE) target of 175 GW of installed capacity, including 100 GW of solar and 60 GW of wind, up from 9 GW of solar and 29 GW of wind installed in early 2017.

The National Study used a state-of-the-art production cost model, which simulates optimal scheduling and dispatch of available generation by minimizing total production costs subject to physical, operational, and market constraints. The objective was to simulate the scheduling and dispatch decisions that are based on variable or production costs. We developed this model to identify how the Indian power system is balanced every 15 minutes in a future year (2022). The model quantifies RE generation, including variability and curtailment, changes in least-cost scheduling and dispatch, flexibility of thermal generation, and periods of stress. To investigate system operations in each of the states with the potential for significant growth in RE capacity, the study team also used a higher-resolution regional model that includes intrastate transmission details. This model—the focus of Vol. II—builds upon the same inputs in the national model but with increased transmission detail within each of the states in the Southern and Western regions plus Rajasthan. Therefore, the regional model provides more robust views of localized operations and can offer more relevant insights to support state-level planning.

The results demonstrate that power system balancing with 100 GW solar and 60 GW wind is achievable at 15-minute operational timescales with minimal RE curtailment. India's current coal-dominated power system has the inherent flexibility to accommodate the variability associated with the targeted RE capacities, and coal flexibility in low-RE, coal-dominant states can play an important role in facilitating RE integration nationwide.

The study results reveal operational impacts, such as:

The study also evaluates the value of strategies to better integrate RE and demonstrates the importance of policy and market planning. The results of the study indicate that:

This work is conducted under a broader program, Greening the Grid, which is an initiative co-led by India's Ministry of Power and the U.S. Agency for International Development, and includes co-sponsorship from the 21st Century Power Partnership and the World Bank's Energy Sector Management Assistance Program. The modeling team comprised a core group from the Power System Operation Corporation Limited, which is the national grid operator (with representation from the National, Southern, and Western Regional Load Dispatch Centers), National Renewable Energy Laboratory, and Lawrence Berkeley National Laboratory, and a broader modeling team drawn from Central Electricity Authority, POWERGRID (the central transmission utility), and state load dispatch centers in Maharashtra, Gujarat, Rajasthan, Tamil Nadu, Karnataka, and Andhra Pradesh. Technical stakeholder review was provided by three teams of Grid Integration Review Committees consisting of more than 150 power system stakeholders from across India.