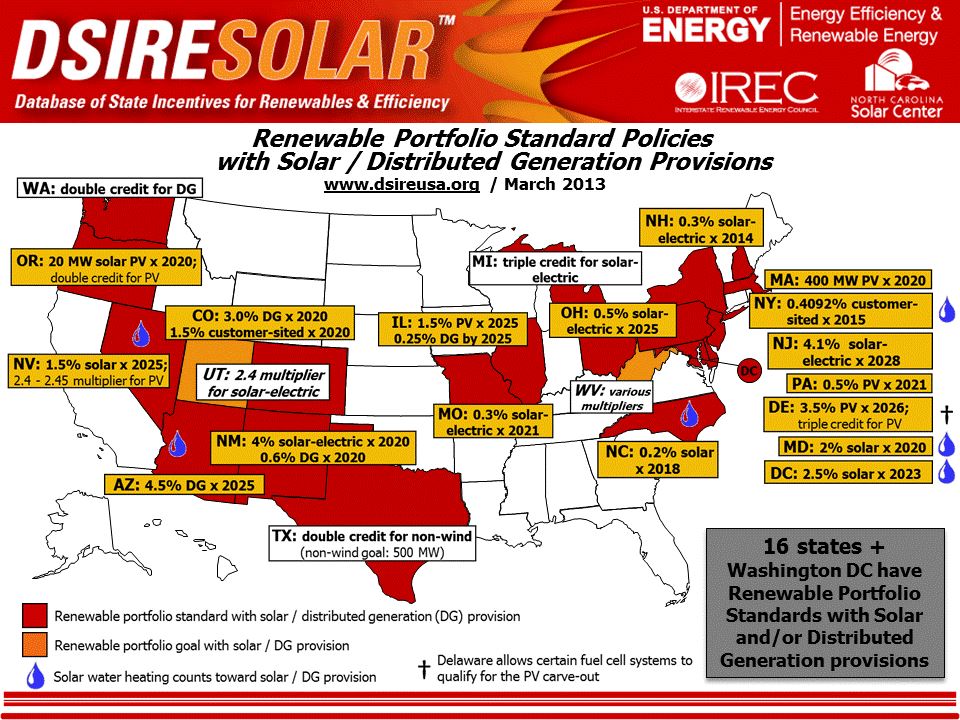 States with renewable portfolio standardpolicies that include solar or distributed generation provisions, as of March 2013. Map from the Database of State Incentives for Renewables & Efficiency (DSIRE)

A renewable portfolio standard (RPS) is a regulatory mandate to increase production of energy from renewable sources such as wind, solar, biomass and other alternatives to fossil and nuclear electric generation. It's also known as a renewable electricity standard.

States with renewable portfolio standardpolicies that include solar or distributed generation provisions, as of March 2013. Map from the Database of State Incentives for Renewables & Efficiency (DSIRE)

An RPS is most successful in driving renewable energy projects when combined with the federal production tax credit. States often design them to drive a particular technology by providing "carve out" provisions that mandate a certain percentage of electricity generated comes from a particular technology (e.g. solar or biomass). States can choose to apply the RPS requirement to all its utilities or only the investor owned utilities. States can also define what technologies are eligible to count towards the RPS requirements.

Ratepayer impacts of an RPS can also derail its adoption politically. A counterbalance to the impacts on ratepayers is that RPS mandates usually drive local economic growth. Under a well designed RPS, costs are shared fairly by all ratepayers. Another way to address ratepayer impacts is to include provisions in the RPS to prevent costs from escalating excessively.

When designing an RPS, incorporate the following best practices: