This story was originally published on JISEA.org.

Energy materials are traditionally made with a linear approach—materials are taken, products are made, and when they expire or break, they are disposed of. The process repeats.

While this can work for a little while, eventually it depletes finite resources, produces waste, and cannot be sustained long term. Garvin Heath, analyst with the Joint Institute for Strategic Energy Analysis (JISEA), is committed to helping move from a linear to a circular economy for energy materials.

"We have to think about not only what to do with energy materials at the end of their life, but get ahead of design, to create technologies that hold their value so materials can be reused, recycled, or repaired easily to have multiple lifetimes," Heath said.

The Pathway to Energy

Heath grew up in the woods of Maine, where he recalls a happy childhood outdoors. His family used passive solar and wood for heat and solar for hot water. This lifestyle instilled a gentleness and appreciation for the environment.

He went to Brown University to study environmental science—an energy-related degree did not exist at the time—and then to University of California, Berkeley to get his master's in air quality engineering.

For his doctoral research, Heath gravitated toward Berkeley's Energy and Resources Group, a program that pioneered teaching and developing scholars to be leaders in energy analysis. "I was attracted to energy because it converges so many disciplines—environment, economy, policy. For the first time, I felt like I could really stretch my perspective to see the whole picture," Heath said.

His work with the Energy and Resources Group piqued his interest in energy and sustainability, which he has gone on to study for the rest of his career.

After joining the National Renewable Energy Laboratory (NREL) as an energy analyst in 2008, Heath was drawn to JISEA for its interdisciplinary, systems approach to solving energy problems.

Emissions from shale gas production and use compared to conventionally produced natural gas (i.e., drilling) had become a polarizing topic, largely due to a lack of comprehensive data. As part of the JISEA study, Heath used a new data analysis approach called harmonization to synthesize existing studies. 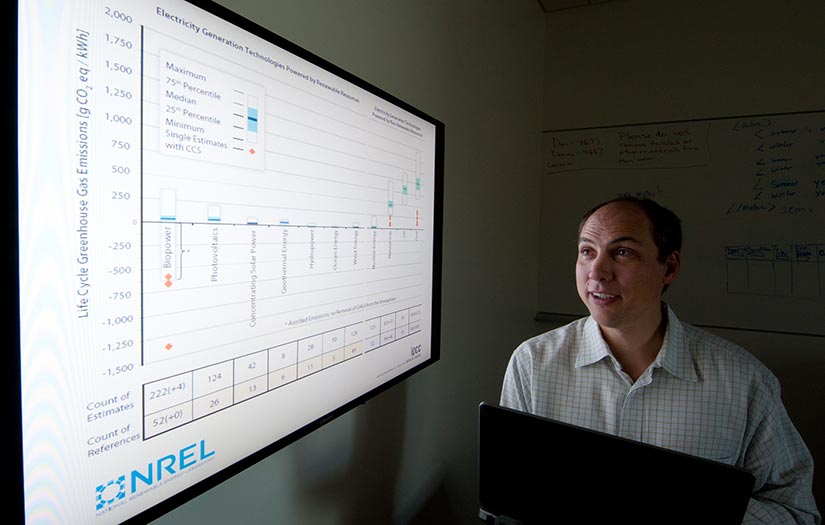 Heath's rigorous harmonization (or meta-analysis) of life cycle assessments showed very little difference in emissions. "It was a profound finding and helped establish a baseline of understanding among disparate literature," Heath said. The findings were published in 2014 in the Proceedings of the National Academy of Sciences (PNAS) article "Harmonization of Initial Estimates of Shale Gas Life Cycle Greenhouse Gas Emissions for Electric Power Generation," which remains in the top 5% of all research outputs tracked by Altmetric, the major data science company for scholarly literature.

Under Heath's co-leadership, the team was able to reproduce temporal and spatial gradients in methane emissions in the Fayetteville shale gas plane in Arkansas. Partnering with industry technical experts, they connected measurements made at components within natural gas facilities to ground-based, site-level downwind measurements to aircraft measurements of the basin.

A series of 11 papers were published on the Basin Methane Reconciliation Study, culminating in an extensive synthesis titled "Temporal Variability Largely Explains Top-Down/Bottom-Up Difference in Methane Emission Estimates from a Natural Gas Production Region" that appeared in PNAS and also holds a spot in the top 5% of all research outputs tracked by Altmetric.

"The study had great engagement with industry and brought data to the table that hadn't been seen before. This is a hallmark of JISEA and produces findings grounded in real-world scenarios," he said.

Today, Heath and his colleagues are developing and applying several approaches to analyze circular pathways for energy materials, including techno-economic analyses, life cycle assessments, and a novel approach called agent-based modeling that accounts for real-life behaviors of people and businesses.

Heath recently led the first global assessment of the most promising approaches to end-of-life management for solar photovoltaic (PV) modules, which could total 80 million metric tons of waste in 2050, or 10% of the world's electronic waste. Based on findings, the authors recommend research and development to reduce recycling costs and environmental impacts, while maximizing material recovery. The results are published in the article "Research and Development Priorities for Silicon Photovoltaic Module Recycling Supporting a Circular Economy," which appeared in the journal Nature Energy. The news release for the study was the top viewed Energy Analysis story on the NREL website last year.

Heath and his team have recently completed several other studies within sustainability. In an upcoming paper, they will outline a set of principles for designing clean energy technologies for enhanced recyclability, including principles specific to PV, wind blades, and batteries.

In another paper, the analysts will present a review of methods for quantifying the sustainability impacts of various approaches to a circular economy. Later, they will unveil an agent-based approach to modeling behavior in the adoption and progression of the circular economy for PV modules, followed by a similar approach for computer hard drives and wind turbine blades.

While research has picked up, the circular economy for energy materials is still very unknown. Circular economy is one of JISEA's key focus areas, which Heath will continue to support in identifying effective, feasible, and affordable pathways to sustainability.

"We have to be good stewards with these materials," Heath said, "and that starts with analysis."