Adding higher penetrations of solar photovoltaics (PV) to the electric power grid could increase the potential for energy storage to meet peak demand, according to new analysis from the U.S. Department of Energy's National Renewable Energy Laboratory (NREL). 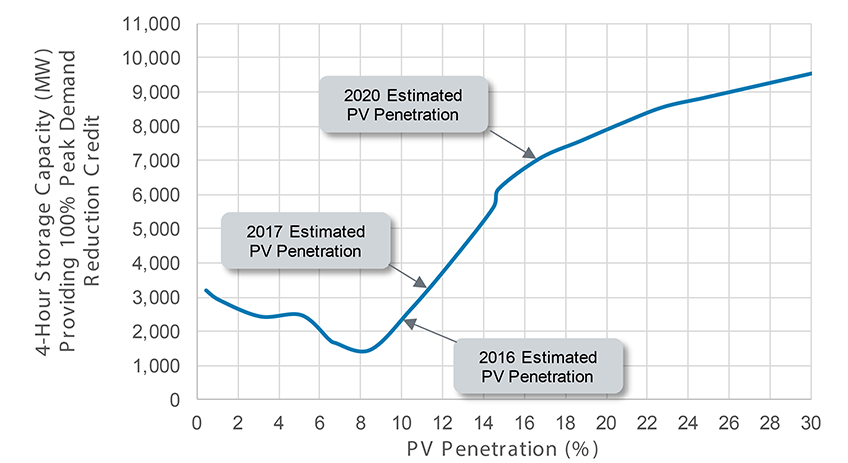 The report, The Potential for Energy Storage to Provide Peaking Capacity in California under Increased Penetration of Solar Photovoltaics, examines the potential for energy storage to perform functions currently met by the conventional generators that serve peak electricity demand in California, and how this is affected by increased PV deployment.

As the cost of battery-based energy storage has declined dramatically in recent years, there has been increasing interest in understanding whether peaking functions could be effectively provided by energy storage. Meeting peak electricity demand in this way could increase system reliability and maximize the use of otherwise-curtailed solar generation. But the technical and economic limits to the amount of energy storage that could be deployed as peaking capacity are poorly understood. At the same time, rapidly falling costs and increasing deployment of PV further complicate analysis of the potential for energy storage to replace peaking capacity.

“Clarifying the uncertainties surrounding the use of energy storage as a peaking resource is important because stakeholders in California, and around the country, are making policy and investment decisions about energy storage’s role in electricity systems based on very limited knowledge,” said Paul Denholm, NREL senior analyst and lead author of the report. “This work aims to support these decision makers with the data they need on the potential of storage to meet peak demand, and how it interacts with PV as greater levels of each are deployed on the grid.”

The study examines nine years of historic load data, and a range of PV penetration levels (0%–30%) and storage durations (2–8 hours). NREL focuses on 4-hour storage based on the California Public Utilities Commission’s “4-hour rule,” which credits storage that can operate for four or more consecutive hours with the ability to provide reliable peak capacity.

NREL finds that PV affects the technical potential of energy storage to meet peak demand in different ways, depending on how much PV is deployed. Under conservative assumptions, when PV penetration in California is lower than about 11%, the potential of 4-hour storage is lower than it would be with zero PV, because that amount of PV flattens the net demand shape. However, beyond about 11% PV penetration, PV creates a “peakier” shape that increases the potential of 4-hour storage.

“Today, California has already reached the point at which PV increases energy storage’s potential,” said Robert Margolis, NREL senior analyst and co-author of the report. “We estimate that if California achieves 17% PV penetration in 2020, the amount of storage that can provide full capacity under the 4-hour rule more than doubles compared with the no-PV case.” The potential of energy storage continues to increase with increasing PV penetration, although at a lower rate.

“While the 11% turning point is specific to California, we expect to see a similar dynamic in other locations around the country,” said Margolis. “We hope these new insights into how PV and storage interact will help build the knowledge base for system planners in all states considering further deployment of PV, energy storage, or both, to increase grid reliability and resilience.”

This research is funded by the U.S. Department of Energy Solar Energy Technologies Office, which supports early-stage research and development to improve the affordability, reliability, and performance of solar technologies.