A computational modeling team in NREL’s Biosciences Center made a significant discovery regarding the key aspects of a cytochrome P450 enzyme that enable it to transform fatty acids directly to olefinic hydrocarbons, an important constituent of gasoline. Understanding how enzymes bring about this biochemical transformation can lead to unlocking a sustainable route to fuel production and is critical to NREL's efforts to develop transportation fuels for the future. 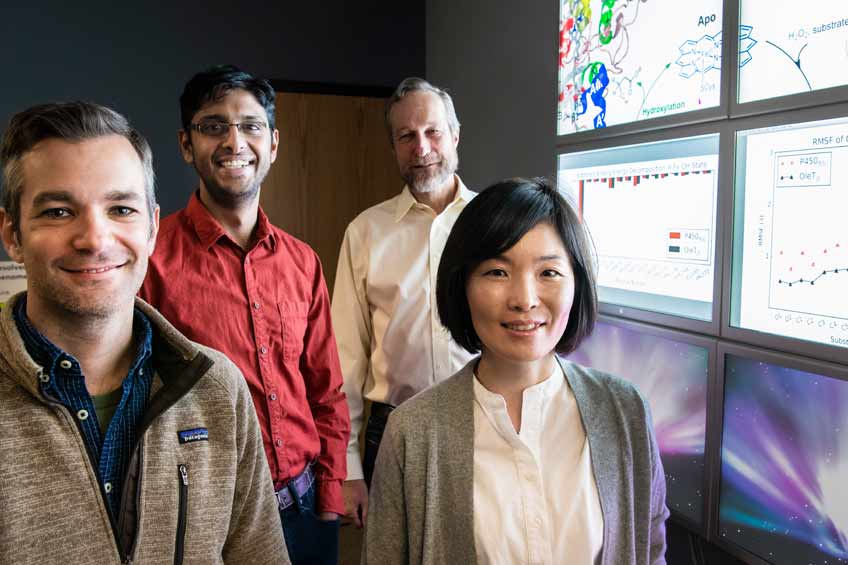 Published in Scientific Reports, "Different Behaviors of a Substrate in P450 Decarboxylase and Hydroxylase Reveal Reactivity-Enabling Actors" focuses on two cytochrome P450 enzymes that share similarities in terms of structure, substrate scope, and mechanism but bring about contrasting chemical transformations. While OleTJE is a decarboxylase enzyme that converts fatty acids to alkene hydrocarbons by removing oxygens from the molecules, P450BSβ is a hydroxylase that converts fatty acids to hydroxylated fatty acids and thus adds yet more oxygen to the molecules. Decarboxylation is a preferred enzymatic reaction for converting biomass feeds into hydrocarbon fuels.

Scientists on NREL's computational modeling team unraveled the key behaviors that make the OleTJE enzyme more likely to decarboxylate and the P450BSβ enzyme more likely to hydroxylate. The study sought to understand the basis for the decarboxylation reaction by modeling the same fatty acid substrate in both OleTJE and P450BSβ at the molecular level and then compared and contrasted the enzyme and substrate characteristics that resulted in their preferred reactions.

"The current biofuels industry is dominated by oxygenated fuels such as ethanol. The oxygen in ethanol affects its performance as a fuel and hence is unlikely to completely replace current fossil fuels that are mostly hydrocarbons with no oxygen," said Vivek Bharadwaj, a computational molecular scientist at NREL and the lead author of the paper. "However, if we can improve the performance of OleTJE to produce more olefins compared to hydroxy-fatty acids, we can renewably produce fuels that are chemically indistinguishable from their fossil fuel counterparts."

Previous studies have revealed that hydroxylation is enabled by "substrate rebound" at the active site, which requires the fatty acid substrate—the substance on which the enzyme acts—to be flexible at the active site. For an enzymatic reaction to flow toward hydrocarbons, the substrate needed to be more stable or tightly bound in its position to avoid the rebound mechanism. While other studies have hypothesized that the substrate mobility plays a role in the mechanism, this NREL study is the first to corroborate the hypothesis and unravel important molecular level factors that facilitate the decarboxylation reaction to produce hydrocarbons.

The insights garnered from this study will provide a roadmap for future enzyme engineering strategies to improve OleTJE performance. These strategies will likely involve controlling substrate mobility at the active site and impact it by controlling water occupancies and substrate stabilizing enzyme interactions.

"The OleTJE enzyme offers us the unique capability of directly producing drop-in fuels from fatty acids that are ubiquitously produced by all microorganisms. Understanding the behaviors of this enzyme at a molecular level has great potential to make the process of converting biomass into advanced biofuels more efficient by using fewer unit operations," said Michael Crowley, group manager of computational science at NREL and corresponding author of the study. "If future engineers can tune the OleTJE fatty acid enzyme to produce more hydrocarbons, this would be a significant contribution to our efforts for a sustainable future with renewable fuels."