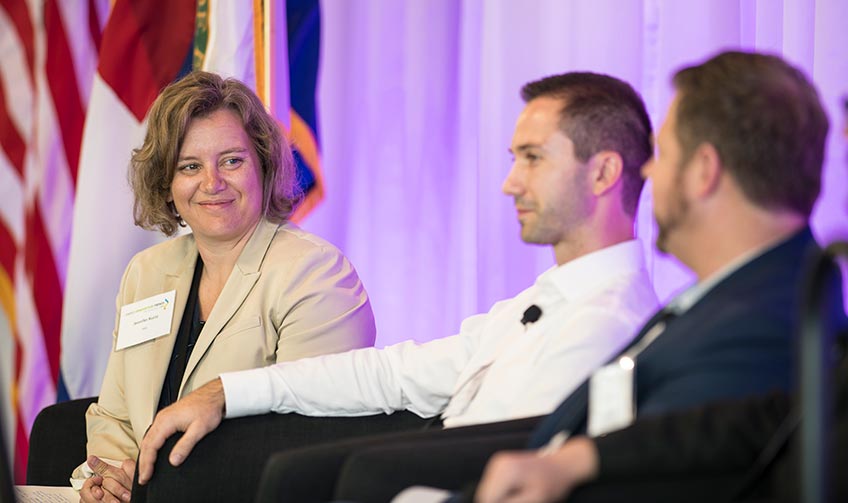 "We can't do what we do without partners," Bill Farris—NREL's associate laboratory director for Innovation, Partnering, and Outreach—told the more than 100 forum participants gathered for the mid-August event on NREL's campus in Golden, Colorado.

NREL is known across the globe as a leader in the development of renewable energy technologies and innovations—but, as Farris added, the impact of those technologies really begins when they hit the market with the help of the laboratory's partners. The ultimate impact is a more efficient, affordable, safe, and resilient energy future. This is what drives the collaboration and innovation among industry, government, academia, and other national laboratories that NREL cultivates—transforming energy through partnerships.

"I have never been to an event with NREL that hasn't been extremely productive—where I haven't left feeling like there are new ideas on the table and new partnerships on the table," said Lauren Faber O'Connor, chief sustainability officer for the City of Los Angeles and one of the event's four keynote speakers. "The 2018 Partner Forum is no different. The access to NREL's staff and scientists, and also the additional partners [NREL] brings in, is so important and such a key contribution to our overall efforts."

The 2018 forum also welcomed Secretary of Energy Rick Perry and Senator Cory Gardner, who addressed attendees as part of a visit to the laboratory on Aug. 14. In his remarks, Perry discussed the partnership opportunities available at NREL so "we can collectively put product in front of citizens." 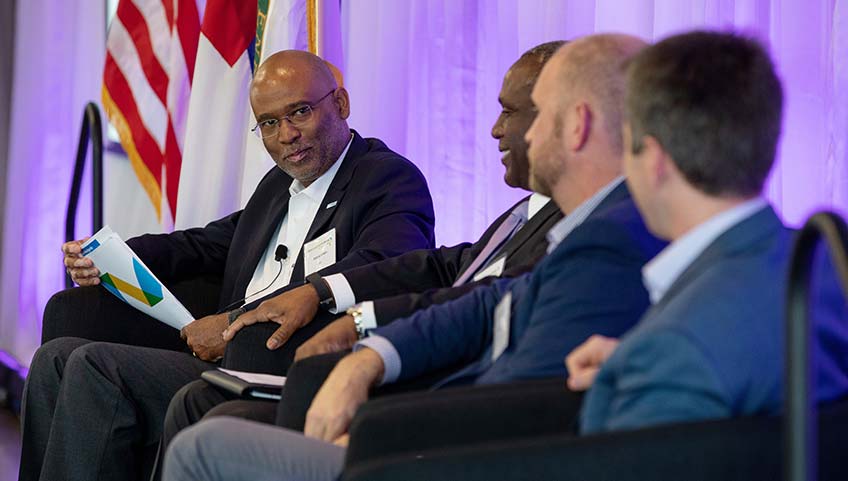 Johney Green (left), an associate laboratory director at NREL, heads up a panel discussion on advanced energy decision support for ports and airports. The other panelists are (from left) Robert Horton of Dallas/Fort Worth International Airport, Matt Arms of the Port of Long Beach, and Scott Morrissey of Denver International Airport. Photo by Werner Slocum / NREL

This year's event focused on the integrated topics of urban design and mobility. New mobility technologies are increasing in popularity and play a key role in addressing urban design challenges as high-density areas continue to experience population growth. Globally, 1.5 million people move into dense urban settings each week with the hope of improving their quality of life. By 2030, 60% of the world's population will live in urban areas, and NREL expects that number to grow to 70% by 2050. Innovations in urban design are necessary to accommodate this megatrend.

It was therefore no surprise that space, movement, and population were common themes throughout the event, spanning all technologies discussed. Another theme was the understanding that renewable energy—and associated cybersecurity risks—must be considered earlier in the design process. University of Chicago Urban Scientist Luis Bettencourt delivered an inspired keynote speech in which he issued an appropriate challenge to attendees.

"We need to start thinking about renewable energy as creating a new system, a system of innovation and a system of value creation that is, in many ways, different from the energy system we have today," he said. "That is best done in a forum like this one."

According to Doug Lhotka—executive security architect at IBM Security—who introduced cybersecurity through his keynote speech: "It's cheaper to bake it in as we build new infrastructure than to try and bolt it on later."

When Florida's Broward County received hurricane relief money, panelist Sam Danchuk—who serves as assistant director of Environmental Planning and Community Resilience for the county—wondered why the majority of the funds didn't go toward renewable energy technologies such as energy storage and other resilience measures instead of diesel generators. "They are huge, they need to be maintained, and they fail often." Danchuk said.

But this transition may not happen as fast as some would like. Bettencourt outlined a few key speed bumps for the adoption and incorporation of renewables in urban design. On the demand side, he said, people aren't able to tell what kind of energy they're using. The wall socket looks the same no matter the source of the power behind it. In economics, value comes from distinction. As a simple solution, he suggested changing the color of sockets fed by renewable energy sources.

On the supply side, Bettencourt added, many existing systems are structured to be paid over the long term. "If we have a fast renewable-energy transition, [existing systems] are difficult to pay for," he said. "You're finding a very well-established industry with a lot of sunk costs."

NREL and others have already started thinking along these lines. Internationally, working in partnership with the United States Agency for International Development, NREL has helped countries such as Puerto Rico and the U.S. Virgin Islands integrate renewable energy systems as they rebuild and recover from devastating tropical storms.

Data, Analysis, and Modeling are Crucial

The need to explore data, conduct analysis, and adhere to reliable modeling also peppered the forum's presentations. Many of NREL's partners already do this through their access to the laboratory's high-performance computing and data visualization capabilities—but not everyone has had the opportunity to gain an appreciation for their power. To illustrate how NREL can help fill this gap, attendees were invited to the Energy Systems Integration Facility (ESIF), home to the laboratory's Data Insight Center and Data Visualization rooms, for a demonstration of NREL's Advanced Energy Systems Design (AESD) capabilities.

NREL's AESD is about seeing data differently. It's the laboratory's approach to combining rapid energy modeling with high-performance computing and high-end visualization to find answers to stakeholders' questions. AESD can be particularly useful in answering complex questions for stakeholders across a range of technical experience levels.

AESD is powered by the Peregrine supercomputer, designed and built by NREL partner Hewlett Packard Enterprise (HPE). During the forum, DOE officially announced the September arrival of NREL's new supercomputer, Eagle (also made by HPE), which will triple the compute power of the already-impressive Peregrine. HPE Chief Technology Officer (CTO) Mark Potter championed HPE's partnership with NREL during his brief remarks.

"Partnership and collaboration need a fuel to get them going, and that fuel was provided by the team here at NREL really thinking differently about our architectures," Potter said. "We sat down with them about five to six years ago and started brainstorming about the need to bring incredible compute capacity to the problems NREL was trying to solve."

Faber O'Connor stressed the essential nature of such measurement and proper analysis. "Sometimes it's difficult to commit to doing things if we aren't sure how we're going to measure them or what the baseline is," she said. "In partnership with NREL, we're able to look way beyond what we thought we'd be able to do from an integrated systems perspective."

Toyota, another NREL partner and forum participant, launched its Beta truck—a heavy-duty, zero-emission truck powered by hydrogen fuel cells—in Michigan last month. Craig Scott, director of advanced technology vehicles at Toyota, explained the impact of NREL research on the company's technology advancements. "We spent a lot of time pouring over millions or lines of data from NREL in previous studies NREL had done on duty cycles for heavy-duty trucks in and around the port," he said. "We did this for about two years before we ever took a wrench and started building one."

Eaton CTO Ram Ramakrishnan detailed the history and rationale behind Eaton's decision to partner with NREL and utilize the ESIF. He recalled his first visit to NREL a year and a half ago to see the ESIF and meet the people who work there. "Within 30 seconds, I [said], ‘We're coming here, for good. There's no one company in the world that can make that kind of investment by itself.'"

In June, 15 members of Eaton's team were officially co-located at NREL to work alongside engineers and technicians in the ESIF. There, the collective group is working on control strategies to manage electric bus fleets for optimization with grid services—and accelerating them to market. 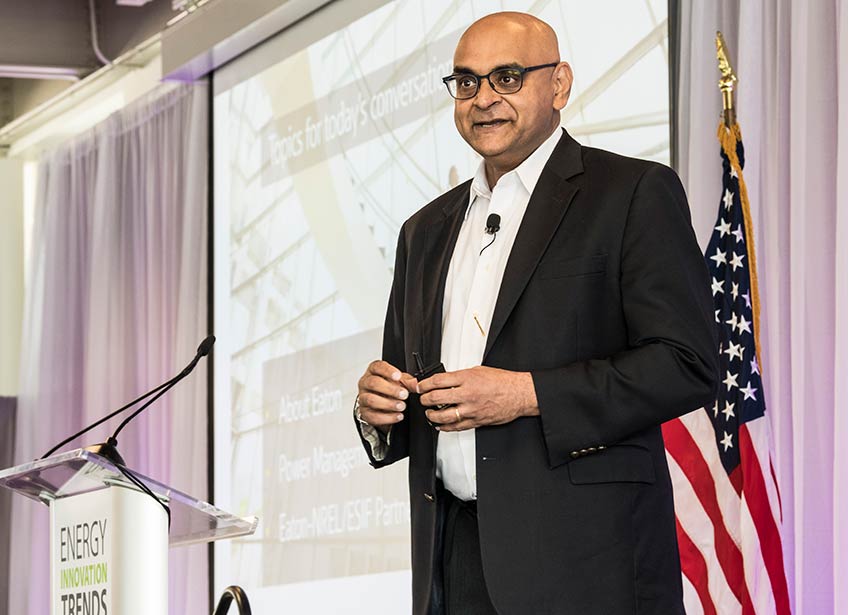 Cybersecurity: Neither an Option nor an Afterthought

Ramakrishnan said data collection is a big part of what his team does at NREL, but all that hard work could disappear in a second in the event of a cyberattack. Lhotka painted a vivid picture of this as he traversed through the sticky world of cybersecurity, a term he suggested everyone replace with "cybersafety."

"Energy security is economic security and renewable energy is one of the key foundations that allows that to happen," he said. As the United States moves closer to energy independence, adversaries around the world are developing digital tools to attack it. "Energy independence is driving attacks against infrastructure," he added.

"We are all doing cybersecurity and making investments in our own way," Ramakrishnan said, and Wes Maurer, head of intelligent transportation systems at the Colorado Department of Transportation, echoed this.

But where the digital world ends, the human factor begins. At several points during the forum, the conversation turned to the idea of the end user, behavior, expectation, and decision making, as well as how all these things impact design.

"Pittsburgh is trying to be 100% renewable by 2035," said Karina Ricks, panelist and director of the city's Department of Mobility and Infrastructure. "People need to be at the forefront of this. We can't be seduced by new technologies that we aren't bringing back to the fundamental problems we're trying to solve."

Austin Brown—executive director of the University of California, Davis Policy Institute for Energy, the Environment, and the Economy—broke down data detailing how the human factor can impact the design of new mobility technology. He said the value of time is difficult to quantify.

"It's the minimum selling price of transportation," he said. "It adds cost to all modes because you're always investing your own time in travel. That's why people will pay more for more convenient modes. People hate waiting for things and place a higher premium on their own time if they're waiting." In an automated transportation environment, however, he acknowledged that different people could value travel time differently. While some may value the time to complete other tasks such as reading, others—with motion sickness, for example—may not.

It's no secret people also value price. Several speakers called attention to the economic factors that can make or break new technologies.

"You can't just fuel your car with hydrogen for the feel-good factor—it has to make economic sense," said Shell Senior Systems Architect Nemanya Sedoglavich. "We do see that the future success of hydrogen as a transportation option really relies on everybody playing together. It has to be a collaborative effort. Car manufacturers need to continue developing fuel cell vehicles as well as bringing the cost down on their portion. Governments need to continue supporting the hydrogen fuel cell vehicles to access the market as well as the energy industry. We really need to start putting out the infrastructure and start really investing in the infrastructure and looking at ways to lower the price of hydrogen at the retail site."

Tim Frazier, executive director for Advanced Engineering at Cummins, Inc., added, "The sustainability goal has to line up with the profitability goal for our customers."

NREL and its more than 500 partners study these trends and others every day. Through nearly 750 active partnership agreements, NREL transforms hope into promise, plans into progress, and ideas into products—and more collaboration means more answers to a host of questions surrounding vital energy issues.