Despite perceptions that she never stops working—a suspicion spawned by emails sent to her colleagues in the wee hours—Sarah Kurtz knows she cannot survive long on only four hours of sleep a night.

"I can quantify that because I've done the experiment," said Kurtz, a Research Fellow with the National Center for Photovoltaics (NCPV) at the Energy Department's National Renewable Energy Laboratory (NREL). "I can function on five to six hours a night for short stretches, but you don't want to work with me if I'm trying to survive on four hours a night."

But the issue is not about her being well rested. Instead, Kurtz is compelled by the mission. It's been that way since she arrived at NREL's predecessor, the Solar Energy Research Institute (SERI) as a postdoc in 1985. "The work we're doing is something that makes a difference," she said. And so the need to press on is urgent, as there's so much to be done to keep renewable energy blossoming.

Ironically, such passion burns in someone who said that "it was an accident that I ended up staying this long at NREL." Her feelings don't reflect her views of the lab as much as her own background. Kurtz descends from a long line of teachers—and early on, she thought that teaching would be her destined occupation. "I had always wanted to get a job at a university."

Following the Path of Music and Math

Born in a small Indiana town next to South Bend, Kurtz grew up in Defiance, Ohio. Her father taught physics before he became an academic dean at Defiance College, a liberal arts college, and her mother too was a teacher.

As a young girl, she assumed that she would major in math—which she enjoyed—as well as music. "Teaching piano was what I saw the women in that area doing at that time." But reality unfolded differently, in part because Kurtz admits she wasn't the most cooperative piano student.

On the other hand, she was a natural in math, and from middle school on, she won a string of math competitions. Once, she got a trophy of the cartoon character Snoopy with "World's Best Math Student" written on the base. Piano re-emerged as central in her life, though, and she was an accompanist for various choirs and even for her high school's rendition of "Fiddler on the Roof." 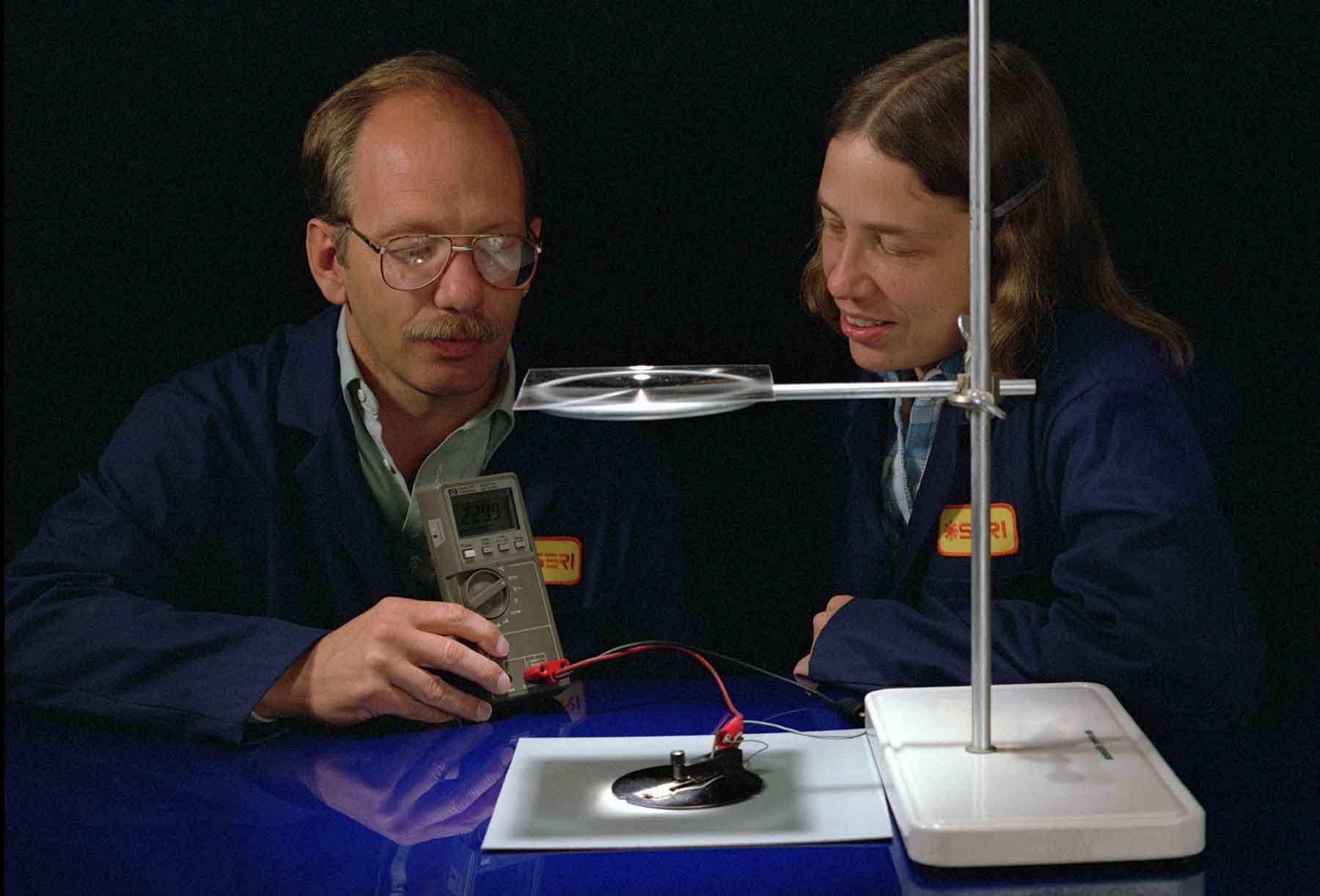 In this photo from 1994, Jerry Olson and Sarah Kurtz look at a solar cell with an efficiency greater than 30%. Photo by Warren Gretz, NREL 2002

An 'Almost'-Hippie Finds an Outlet in Science

"I was born a little too late to be a full-fledged hippie. But I was close," Kurtz said, laughing.

Her interests led her to earn her Ph.D. in chemical physics from Harvard University in 1985. Her advisor there, whose research was funded by SERI (the Solar Energy Research Institute, NREL's predecessor), told her that the new Colorado lab would be a good fit.

"I think I was pretty lucky," she said. She started to work with Jerry Olson in 1986, when Olson had just invented a two-junction, III-V photovoltaic (PV) cell using gallium indium phosphide and gallium arsenide that could convert light more efficiently into electricity than previous attempts at using other materials. "It was a good thing waiting to happen. I walked into that situation and had the opportunity to help that blossom." In 2007, Kurtz and Olson were awarded the Dan David Prize for advancing their III-V work on next-generation multijunction cells. The cells are now used on commercial satellites, and NASA selected multijunction solar cells based on their invention to power some of the Mars rovers.

Her work with multijunction cells began a string of successes. "I've had a lot of other people give me opportunities—like working with the reliability group at NREL." That transition in particular, representing a major change in research direction, wasn't easy. But it was eased by a common thread Kurtz finds throughout the lab: "Just the dedication, commitment, sense of vision to improve the world—I think NREL is really a special place."

Before making her move into reliability research in 2007, Sarah said she surveyed the PV landscape. "I looked at the 40%-efficient cells. I looked at the world and said for these to be worth anything to anybody, we need to get them into systems." Around that time, she was part of an Energy Department strategic planning process that addressed the question: To be successful in the future, how did NREL need to change?

"It's like when your baby grows up and goes to college, and you still want to treat him as a 12-year-old. NREL needed to be ready to understand this situation, now that industry had grown up, and a lot of the PV action was out there in industry instead of here. It used to be that all the action in PV was here in NREL." She decided to look at reliability issues as manager of the lab's PV Module Reliability Test and Evaluation Group.

"That was a very difficult transition. I didn't have any experience there," she said. But she was able to hire some very talented and experienced scientists to supplement the team. "We had the opportunity to do some important things."

Among the things she has learned: be prepared for unexpected outcomes of experiments.

That's a theme Kurtz has seen repeated over the years. For example, in a presentation last year in China, she noted that Jet Propulsion Lab (JPL) conducted a series of experiments years ago with PV modules. At that time, JPL reported—surprisingly—that "the major cause of module failure to date was by gunshot" because round black or blue cells on a white background made good targets. "That's a good representation of why it's dangerous to try to predict things," she said. "People historically look at something, analyze it, and try to come up with a conclusion. But then, in the end, when you go out and do the work, you find that things come out a little differently than you expected."

As for changes she's seen, Kurtz paused. "There are so many to choose from. If you look at the long-term projections for the PV industry, it has grown faster than every long-term projection, largely because of people's enthusiasm for solar energy. While some investors choose solar because they found a lucrative investment, in other cases questionable business deals move forward because they will create jobs or energy security for a developing country rather than because of a strong return on investment. Conventional business models often don't match the reality, which is that the world is adopting solar. And, as solar grows and prices drop to levels that were previously said to be impossible, our role has to change." 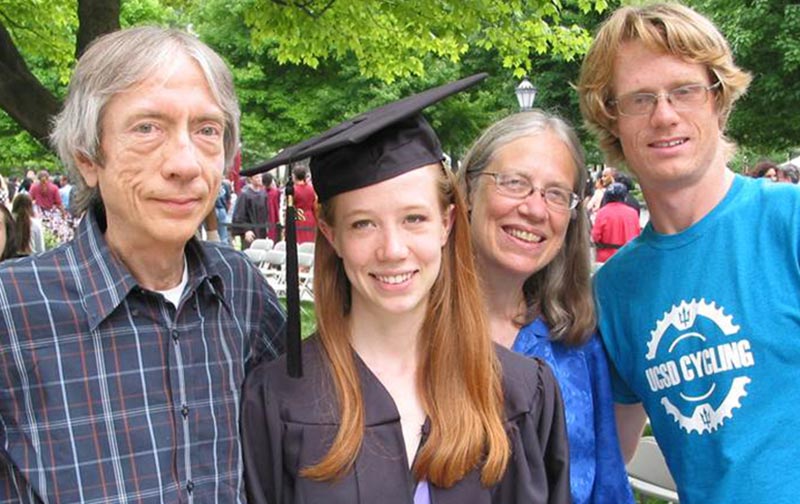 Sarah and her husband, Jim, at the graduation of their daughter, Calista—who with her brother, Benjamin, has grown up alongside the PV industry. Photo from Sarah Kurtz, NREL

Kurtz has often been recognized for her work, most recently when the U.S. Clean Energy Education & Empowerment program gave her a Lifetime Achievement award for her continuing contributions to knowledge about photovoltaics. But work isn't her only calling—despite evidence of pre-dawn emails.

She and her husband, Jim Bernard, who teaches physics at the Colorado School of Mines, enjoy gardening at their house, which is also crammed with musical instruments: two pianos, two violins, a guitar, flute, clarinet, oboe, and cello. "With languages and music, the more the better," Kurtz said.

And during visits from their daughter, Calista, currently a math graduate student at Stanford, they may gather around the pianos and play songs from musicals. Their son, Benjamin, who is a grad student at the University of California San Diego, is following Kurtz into work related to solar by studying ways to use sky cameras to predict the output of PV systems. "We're both practical and want to make an impact on the world," she said.

Looking ahead, she notes the world that has changed greatly since she first came to Golden, Colorado, transforming into a world in which PV is playing an increasingly important role. It's possible that she may still teach some day—though probably not piano, as she once imagined. For now, the happy accident of her NREL tenure continues, which keeps her getting up early and staying up late.

Learn more about the National Center for Photovoltaics.