National Renewable Energy Laboratory (NREL) Senior Scientist Min Zhang has a special relationship with Zymomonas mobilis, a rod-shaped bacterium that has bioethanol-producing capabilities. Of her 80 peer-reviewed papers and 21 U.S. patents in the field of biochemistry and biofuels, many reference this sugar-eating "bug."

Their fortuitous pairing began shortly after the Chinese-born U.S. citizen and biochemical engineer arrived at NREL in 1992. She came as part of a newly created team tasked by what was then the Energy Department's National Bioethanol Program with exploring a new path for ethanol conversion for biofuels. At the time, global researchers were focusing on using yeast for alcohol production.

"That [yeast] organism was the one people had studied for years. We at NREL decided to take a different approach," Zhang said. They chose instead the fermentative bacteria known to scientists as Zymomonas mobilis.

"We felt it could be very promising," she said, explaining that the organism could consume glucose very fast—three times faster than yeast—as well as produce ethanol at high yield, which would potentially improve fuel production cost. By tapping that hunger, researchers could use the bacterium to speed up the process of turning the sugars (such as those derived from the long-chain cellulose and hemicellulose found in feedstock) into useable fuels and products.

Next, the four-member NREL team successfully engineered the bug for pentose metabolism—pentoses are 5-carbon sugars that have been shown to be less appealing to organisms than 6-carbon sugars such as glucose. Zhang and the team had more positive results. "We ended up with a breakthrough," she said, and their work garnered national attention. In 1995, Science magazine published "Metabolic Engineering of a Pentose Metabolism Pathway in Ethanologenic Zymomonas mobilis," and the editors of R&D Magazine named the process a prestigious R&D 100 Award winner.

Three cooperative research and development agreements (CRADAs) followed, including a major commitment with DuPont. The NREL/DuPont CRADA covered the entire span of biofuel technology, from biomass to ethanol. Scientists and engineers from DuPont and NREL worked collaboratively for years to further improve the biomass-to-ethanol conversion process, including the biocatalyst development using Zymomonas. Following some additional improvements, DuPont is now in the process of using the technology at their new cellulosic ethanol plant in Nevada, Iowa, where they plan to produce 30 million gallons of biofuels per year from the non-food parts of plants.

"I'm pleased to see that kind of dream come true, and proud that the technology could end up in a commercial place," said Zhang, who traveled to the site for the October 30 grand opening of the $225 million plant.

In honor of her many contributions, this year Zhang was given the Battelle Memorial Institute Inventor of the Year award as well as the Distinguished Innovator Award at NREL's Innovation and Technology Transfer Awards. At the tech transfer event, the Energy Department's Assistant Secretary for Energy Efficiency and Renewable Energy David Danielson presented her with the award, and she in turn thanked "my dear colleagues, the team that has a lot of talent and has put a lot of effort into this work."

Zhang speaks after being named the winner of the Distinguished Innovator Award at NREL's 2015 Innovation and Technology Transfer Awards ceremony. Photo by Dennis Schroeder

A Lifelong Passion for Learning

Her success is no surprise. Zhang, who grew up in a town outside of Shanghai in China, was always a good student. "I liked nature, and I'm good at math and science—but not quite as good in writing," she laughed.

During that time, her country was undergoing major social change. When she was in high school in 1977, the government launched China's National College Entrance Examination—known as the gaokao ("big test" in Mandarin)—in an attempt to begin catching up to the rest of the world. She took the second national college entrance exam, a grueling three-day affair administered nationwide in July of 1978. About a month later, a plain letter informed her that she was admitted to East China University of Science and Engineering to study biochemical engineering. She was on her way, and did well in higher education.

Following her graduation from East China University in 1982, she was encouraged to take a graduate school entrance exam, which she did—and received another acceptance letter to study at Osaka University in Japan. To prepare, her group underwent a six-month immersion in Japanese language studies. "It was hard, but there are some common characters in both languages, which helped," she said. Then they departed together on a new adventure. "It was my first trip on an airplane, and very exciting," she said, recalling joining about 150 students on a charter from Shanghai to Osaka.

To cover basic expenses, she was given a Chinese National Scholarship from 1983 to 1989. Zhang supplemented that by teaching Chinese to Japanese nationals. "I'd get on a moped and drive to the city and teach class for an hour or two, and then come back to the lab to continue the experiments." After earning her Ph.D. in engineering, Zhang spent a year working for the Japanese firm Suntory, researching interferons.

As she was looking ahead, political unrest spread in China. The protests and violence that rocked Tiananmen Square in the "June Fourth Incident" in 1989 forced her to rethink her options. "I was concerned about going back to China, and I couldn't stay in Japan," she said, because her visa wasn't going to be renewed. However, one of her professors was hosting an American academic—who was impressed with her credentials, and invited her to the United States as a postdoctoral student.

"I hadn't ever thought about the U.S., but it seemed like a good option," she said. Zhang had studied English, but admitted that her grasp was fairly basic. Following some wrangling for visas, she landed at the University of Michigan in February of 1990 as a research associate. Eventually, when it came time to look for a job, she searched the want ads in professional journals and discovered that an unfamiliar place called NREL was hiring. "I thought it was in North Carolina. Then I received a call from NREL," she laughed. "I didn't have a good grasp of U.S. geography." Still, she applied, interviewed—and was hired. 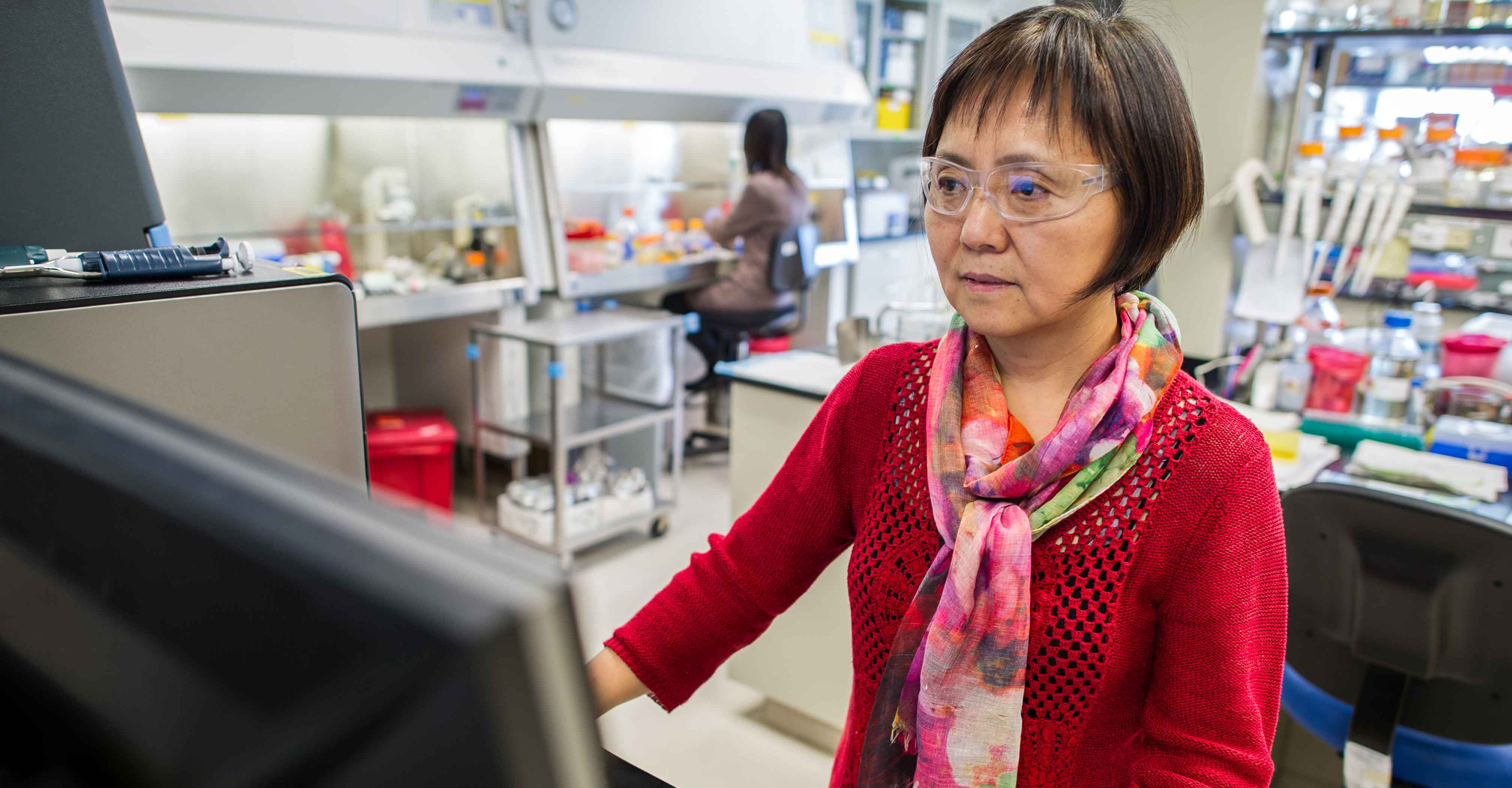 Zhang is now looking at ways to create "drop-in" biofuels—fuels that could be mixed in directly with jet fuel and other products. She is using Zymomonas to make a four-carbon molecule that is not only potentially a bulk chemical building block, but also can be further chemically converted to produce gasoline, diesel, and jet fuels. Photo by Dennis Schroeder

She found a welcoming environment. Zhang has worked alongside a number of key NREL scientists including NREL Research Fellow Mike Himmel, a biochemist whose research on cellulase greatly simplified and lowered the cost of converting biomass to fuel. Her contributions at the lab, too, are notable. "Min has been a pioneer in the field, and has helped establish NREL as a leader since she arrived at NREL in 1992 as part of the Energy Department's then-new National Bioethanol Program," said Acting Biosciences Center Director Mark Davis.

Although much of her time originally was spent doing foundational work with Zymomonas mobilis, Zhang  hasn't stopped there, and has pushed the frontiers of biofuel research further. While observing a range of outcomes for various biofuels pretreatment processes, she focused on the problems of toxicity in breaking down cellulosic biomass for about four years beginning in 2008.

"It had been a black box," she said, but reasoned that "unless we understand why the process is killing our organisms, it would be hard for us to improve [the process]. I decided to explore the black box. This was my mission."

Zhang explained that "fermenting lignocellulosic sugars to ethanol is very challenging." In particular, "our organisms didn't like the toxicity—and they died," which prevented using some sugars for high-yield products. Just as she had done early on at NREL, she began systematically analyzing the problem. "I looked at the toxins, and why our [bugs] don't like them."

Once she understood more and traced the origins of toxins—whether they were coming from biomass or from the pre-treatment process the engineers used to produce these soluble sugars—she was able to provide feedback to other researchers. Armed with new insight, NREL engineers were then able to make the processes more benign, and researchers were able to find improved organisms. "It gave engineers the context to improve," she said, and the hungry bug thrived in the sugar stream that is derived from the improved pretreatment process.

Her work has also evolved in the lab. In 2012, with cellulosic ethanol maturing, the Energy Department's Bioenergy Technologies Office was looking in fresh directions, including ways to create "drop-in" biofuels—fuels that could be mixed in directly with jet fuel and other products. "I started exploring new pathways to produce molecules that can be upgraded to drop-in fuels," she said.

Among her promising avenues are examinations with a fatty acid pathway using oleaginous yeast to make long-chain hydrocarbon molecules. Also, she is using Zymomonas to make a four-carbon molecule that is not only potentially a bulk chemical building block, but also can be further chemically converted to produce gasoline, diesel, and jet fuels. The team has made progress, she said: "We've seen exciting results."

As she looks to the future, Zhang is proud of where she's been. And she's also pleased that she's been able to partner, so to speak, with various organisms. "Our bug is actually really happy now," she said of her current research and familiar teammate. And that's the way Zhang wants to keep it as she works toward new discoveries.