A buzz builds in the corridors of a downtown Denver hotel, the sounds of casual conversations and earnest entrepreneurs. If synapses firing made a noise, it might sound like this, the click of connections being made. Over the course of two days, 30 cleantech entrepreneurs will make their case for funding at this year's Industry Growth Forum (IGF) put on by the Energy Department's National Renewable Laboratory (NREL).

"The hardest thing for folks with new technologies is to find someone to give them money," said Tom Clark, CEO of the Metro Denver Economic Development Corp. He was a speaker at the event and is a longtime supporter of growing the cleantech sector in Colorado.

Finding that someone was the hope, of course, for the entrepreneurs attending the annual IGF, which began in 1995 and has resulted in billions of dollars being pumped into startup and early-stage companies.

Kate Cheesbrough, assistant director of NREL's Innovation and Entrepreneurship Center, which produces the IGF, said the event grew out of investors asking the national laboratory about new technologies and entrepreneurs looking for leads about investors.

"We wanted to create this forum as a platform to connect these two groups," she said.

"This is really fulfilling the mission of the laboratory," said Bill Farris, NREL's associate laboratory director for Innovation, Partnering, and Outreach. "We want to see renewable energy technologies from the innovation stage all the way through to large-scale market adoption of those technologies. That's our primary interest. That's our mission. These companies can't get to any appreciable size without the financial resources of others. This is all part of that process."

The 30 presenting companies were chosen from a pool of 150 applicants from around the world. A robust review and selection process by an external committee of 80-plus investors and national incubators decided which businesses would be allowed to make presentations. 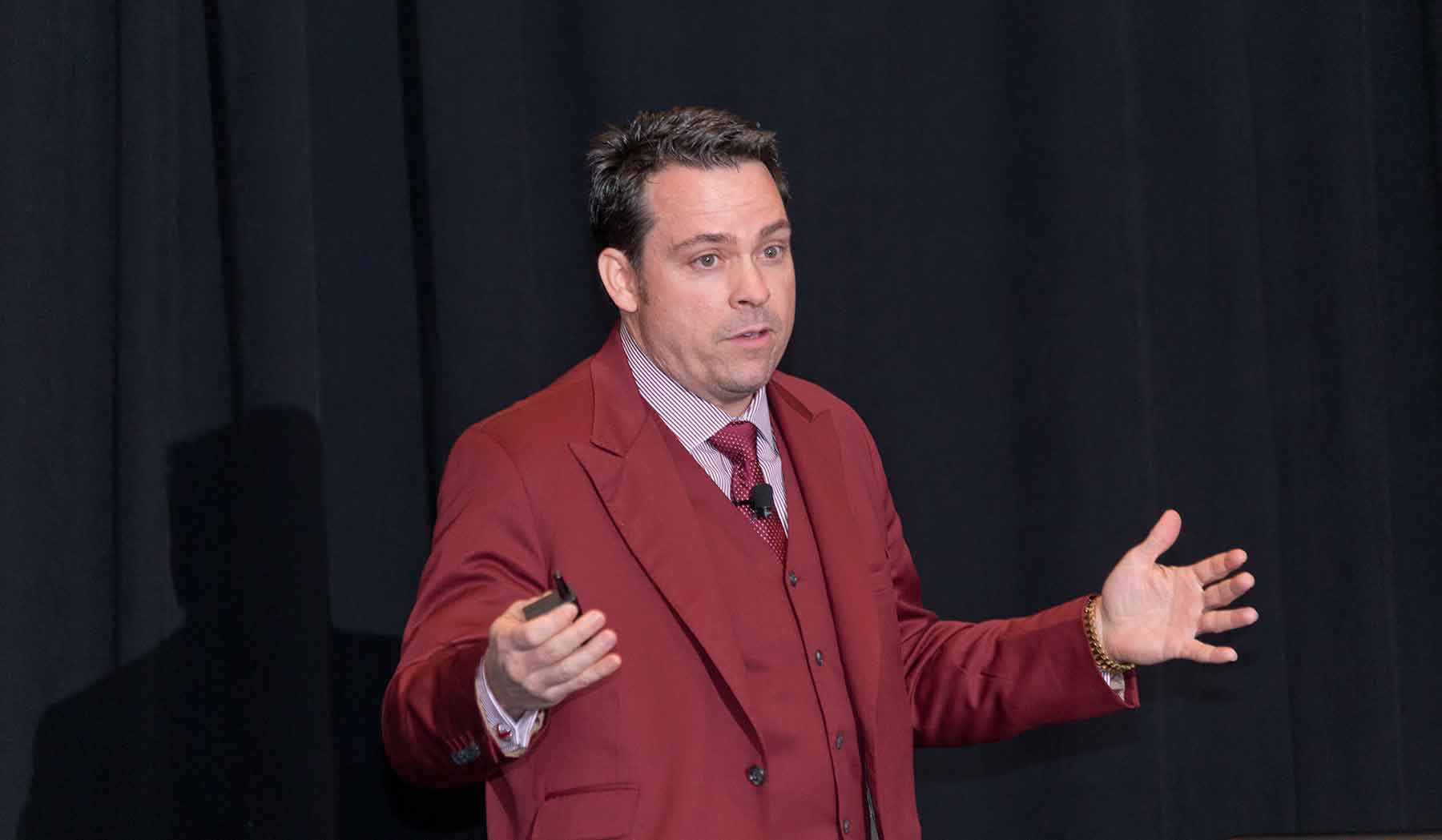 Tim Reeser, president and co-founder of Lightning Hybrids, presents his business case before a panel of investors who served as judges. His company received the top prize, the Best Venture Award, at the conclusion of this year's Industry Growth Forum. Photo by Pat Corkery, NREL

Entrepreneurs attending have several chances to state their case to potential investors. They can sign up for 15-minute one-on-one meetings with investors in a setting routinely compared to speed dating, and then there are the casual meetings that take place in the hotel's hallways.

Companies invited to present are given 10 minutes on a stage in front of a panel of judges and other attendees, and the investors who serve as judges get another 10 minutes to ask questions.

Be Power Tech is a Florida-based company that is developing air conditioners that generate electricity and are powered by natural gas, a technology that could reduce carbon emissions and cut the costs of cooling and powering commercial buildings. Last year, the company learned too late of the IGF to apply to present, but its founders came to the IGF anyway in search of funders. Be Power Tech met a venture capital company and eventually closed an undisclosed funding round. This year the company was chosen to return as a presenter. Daniel Betts, CEO of Be Power Tech, said the money didn't come as a result of a one-on-one session.

As much as the entrepreneurs attending the IGF like being able to network, the potential investors also appreciate the opportunity to participate.

"I prefer meeting people in person," said Michael Ware, who has attended the IGF for 15 years. He is managing director of Advance Capital Markets, a private investment firm located in Washington, D.C. "I see a lot of slide decks and everything else like that. I have an opportunity here to do more. I can hear [entrepreneurs'] presentations, see them, meet with them, understand their personalities, and ask them questions."

"We met with 10 companies this morning in the one-on-ones, and there are three or four that we'll go back and have longer conversations with," said Olushola Ashiru, partner and portfolio manager of New Energy Fund II in New York, and a three-year veteran of the IGF. "This saves us time and helps us hone in on companies of interest." 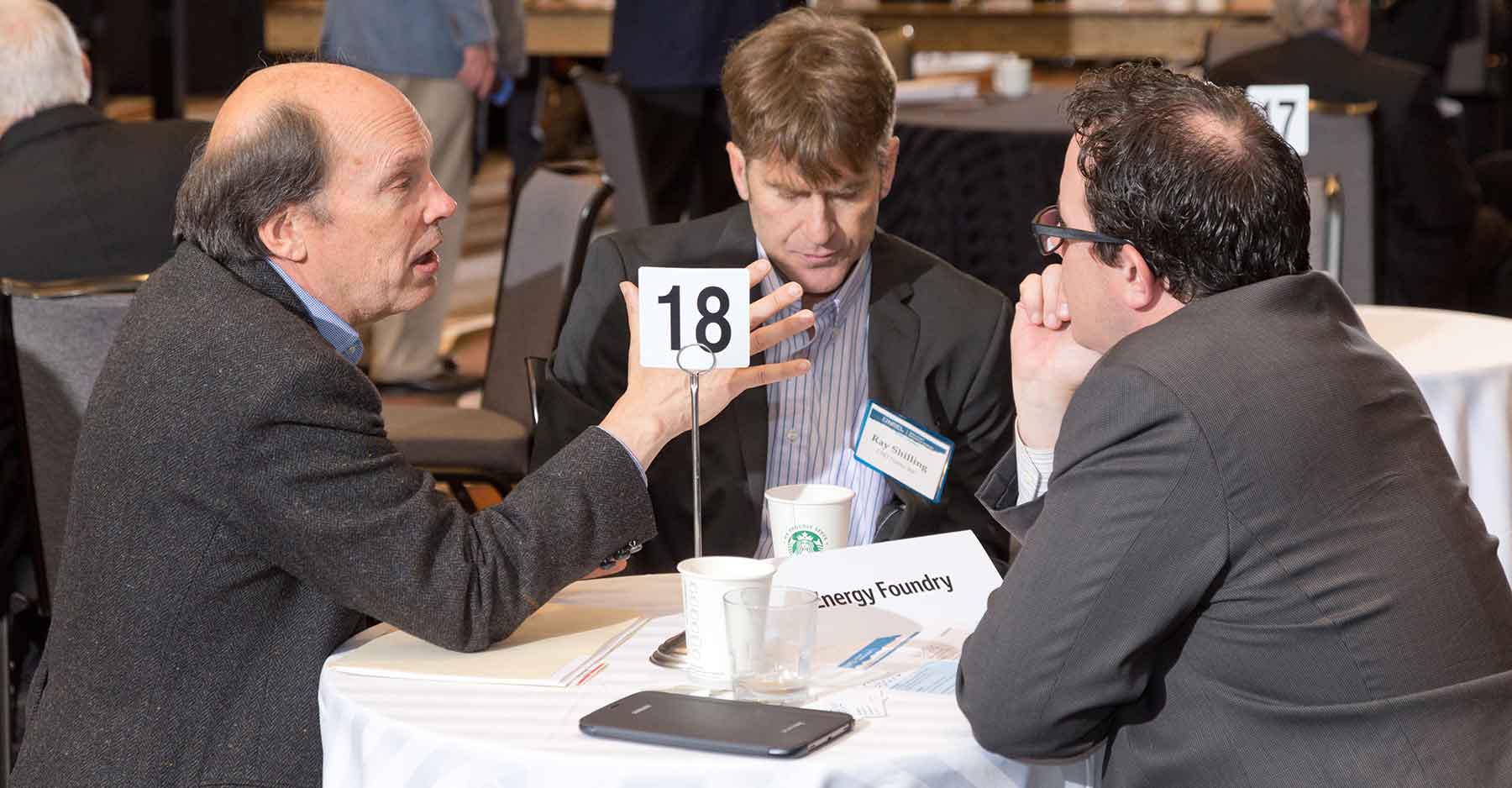 The IGF ended with the presentation of three awards chosen by the investor judges. Each of the winning companies will receive legal assistance from Lewis Roca Rothgerber LLP and technical help from NREL. Two prizes were given in the category of Outstanding Venture, to Stone Mountain Technologies Inc. and Sun Number LLC. A Tennessee company, Stone Mountain Technologies is working on heat-pump technology that draws heat from the air. Sun Number, a Colorado firm, has developed an online tool that allows owners of commercial and residential buildings to determine how much energy can potentially be generated by the addition of solar panels. The company's ability to determine that amount relies in part on NREL's solar calculator.

Another Colorado company, Lightning Hybrids, received the top prize—the Best Venture Award. The company can equip a truck or a bus with a technology that takes the energy generated by braking and uses it for acceleration.

Tim Reeser, president and co-founder of Lightning Hybrids, left with the trophy after six previous years applying to become a presenting company. He attended each of the past seven years, but this was the first time he was chosen to be a presenter.

"My message to everyone else is don't give up, because there was a value in coming those six years," said Reeser, who made his presentation in an eye-catching red three-piece suit. "Each year I got better at telling Lightning Hybrids' story, looking at how other people told their story. Also, the company matured to a point where the story resonated, where before it didn't quite resonate with everybody. Some of it's maturing, some of it's learning to tell the story better, but a lot of that I learned from being here."

After his presentation, Reeser was approached by three potential investors wanting to talk. They weren't with companies he'd pitched to during the earlier one-on-one session. "This is the first time I met these three. I wouldn't have met them if I wasn't here and didn't have the chance to be here."

The amount of money entrepreneurs hoped to secure varied. A Utah company called iLumens was asking for $5 million so that it could ramp up production of its prototype energy-saving lightbulbs. Paul Ahrens was after between $2 million and $5 million for his Oregon company, CSD Nano.

"We're at that stage where the amount of money we raise determines our growth," said Ahrens, president and CEO of CSD Nano, an Oregon company that is bringing to market an anti-reflective coating that can be applied to existing solar arrays to increase their efficiency. "With no money, it's slow growth, organic growth. It's going to happen. There's no question what we're doing is going to occur. People are going to use this. How fast it occurs is a function of how much working capital we have."

CSD Nano has already applied its coating to 3,000 panels at beta sites in Greece, Italy, China, and Portugal.

Ahrens, who attended the IGF last year and was chosen as a presenter this year, met with 10 potential investors during the one-on-one sessions, with mixed results. He said he was told by some that his pre-revenue company was too early for them to invest in; others said it was too late, that they preferred getting in on the ground floor of a developing technology.

It was evident at the IGF that an ecosystem has been built up around cleantech entrepreneurs. Representatives from a handful of incubators traveled to Denver, coming from the Northwest (Oregon BEST in Portland), Midwest (Clean Energy Trust in Chicago), and further east (Greentown Labs in Boston). NREL established a relationship with the incubators, who encourage their portfolio startups to apply to the IGF—which also provides a conduit to the other services that NREL can provide to support the growth of their member companies.

The hardware-focused cleantech incubator Greentown Labs provides resources, network access, and affordable co-working, lab, and event space for startups. Of its 33,000 square feet, about 20,000 is available for building prototypes.

The incubator houses 40 companies, none of which are in competition with the others, said Mark Vasu, executive vice president at Greentown Labs. "The CEOs meet for dinner, pitch to each other. They share tools, resources, networks, investors, grant-winning ideas. There's a lot of different aspects to being right there in the trenches with others who are sharing the pain of 'startup-istan,' if you will." 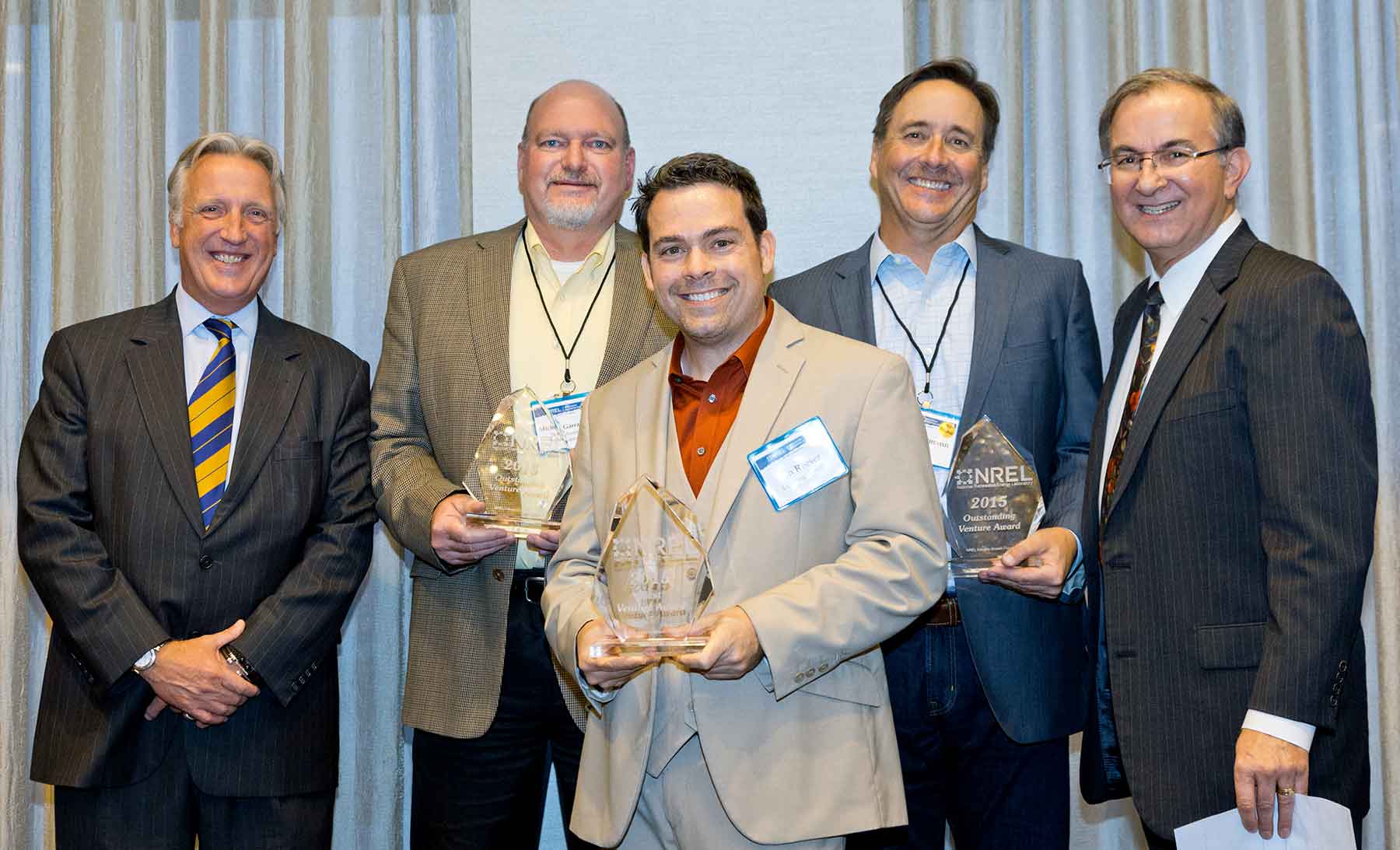 The co-founders of Sistine Solar, which presented at the IGF, occupy space in two different cleantech incubators. Senthil Balasubramanian is in Greentown Labs, while Ido Salama is in Urban Future Lab in New York. The two met during orientation week for business school at the Massachusetts Institute of Technology in 2011, and discovered similar outlooks and a similar interest in solar power.

"We both believe that within our lifetime we have to get to 100% clean energy," Balasubramanian said. "We think that's a lofty aspiration that's worth spending our time on. It's a passion to see that happen."

Sistine Solar is focused on overcoming objections a homeowner association might have to rooftop solar panels. To do this, the startup has created a patent-pending, customizable graphics layer within a solar panel. This layer can bear any image, such as a red Spanish tile pattern meant to match a Spanish tile roof.

After the two made their presentation, the judges pointed out areas they should research further, including how the addition of a Sistine Solar film would affect the warranty on the rooftop solar panels.

"Investors might see things that you might not see," Salama said. "They have had the benefit of investing in hundreds of different companies."

Ryan Wood, founder and CEO of Frontline Aerospace, applied three previous times before he was chosen to make his case this year.

"Great connections get made here," Wood said in explaining his interest in attending. He has now attended the forum for four years. Wood's Colorado company intends to increase the performance of turbine engines while reducing emissions from them.

"It hasn't been a problem to do technology development, IP, sales, marketing, building prototypes, proof of concepts," Wood said. "Those are all fairly straightforward and basic business skills. You've got to have enough experience to be able to do those things, but the fundraising is 5 to 10 times harder. Fundraising is the heavy lifting."

The IGF won't be held in in 2016 as NREL shifts the event from the fall to the spring, beginning in 2017. But entrepreneurs will still gather in Colorado next year for a chance to meet with the investment community as part of a new fall event hosted by NREL's Innovationand Entrepreneurship Center. Unlike the IGF, the Innovation Showcase will feature companies with ties to NREL and the other national laboratories, and be limited to about 100 attendees. Building on the momentum from the Innovation Showcase, the IGF will take place once again in Denver in the spring of 2017.