Electrochromic windows—which use a jolt of electricity to go from clear to dark—have been available for decades, but one NREL-developed technology is poised to move the industry forward. Photo by Dennis Schroeder

A serial entrepreneur with four companies to his credit, Loren Burnett found the makings of his fifth at the Energy Department's National Renewable Energy Laboratory (NREL).

The founder, chairman, and CEO of what is now called e-Chromic Technologies Inc., Burnett was looking for a technology with a potentially huge market, something unique and easily understood that wouldn't take a decade and tens of millions of dollars to turn into a product.

What he found at NREL was something of clear importance to everyone: a window—but not just any window. Burnett's deal with NREL gives him the right to commercialize research that could allow e-Chromic an entry into homes, offices, and even cars.

Now working with a private laboratory in California to help final deployment, e-Chromic is developing an electrochromic window film from NREL's research and preparing to fight for market share in an industry that analyst firm NanoMarkets estimates will generate more than $3 billion in revenue by 2022. It's true that electrochromic windows—which use a jolt of electricity to go from clear to dark—have been available for decades, but the NREL-developed technology is poised to move the industry forward.

The technology, dubbed SunStop, is a finalist for an R&D 100 Award in the Mechanical Devices/Materials category. The winner of the award, which is deemed by industry an "Oscar of innovation," will be announced in November.

The product expected to come from the SunStop technology is a flexible film that can be affixed to the interior side of an existing window and connected wirelessly to a controller. Once activated, the technology makes the window appear reflective from the outside.

"Don't think of those bright, shiny, gold mirrored buildings that were built in the '80s in Denver," Burnett said. "That's not what we mean by reflective. Think of brushed aluminum, brushed steel, kind of the cover of a MacBook type of look."

Other electrochromic windows absorb light and then re-emit it as heat, rather than reflect it. In certain conditions, some energy-efficient windows treated with special reflective coatings have been found to cause damage when a concentrated beam of sunlight is reflected onto vinyl siding or the plastic parts of a parked car.

The idea behind the SunStop technology would avoid that problem, as the reflected heat and light is scattered. 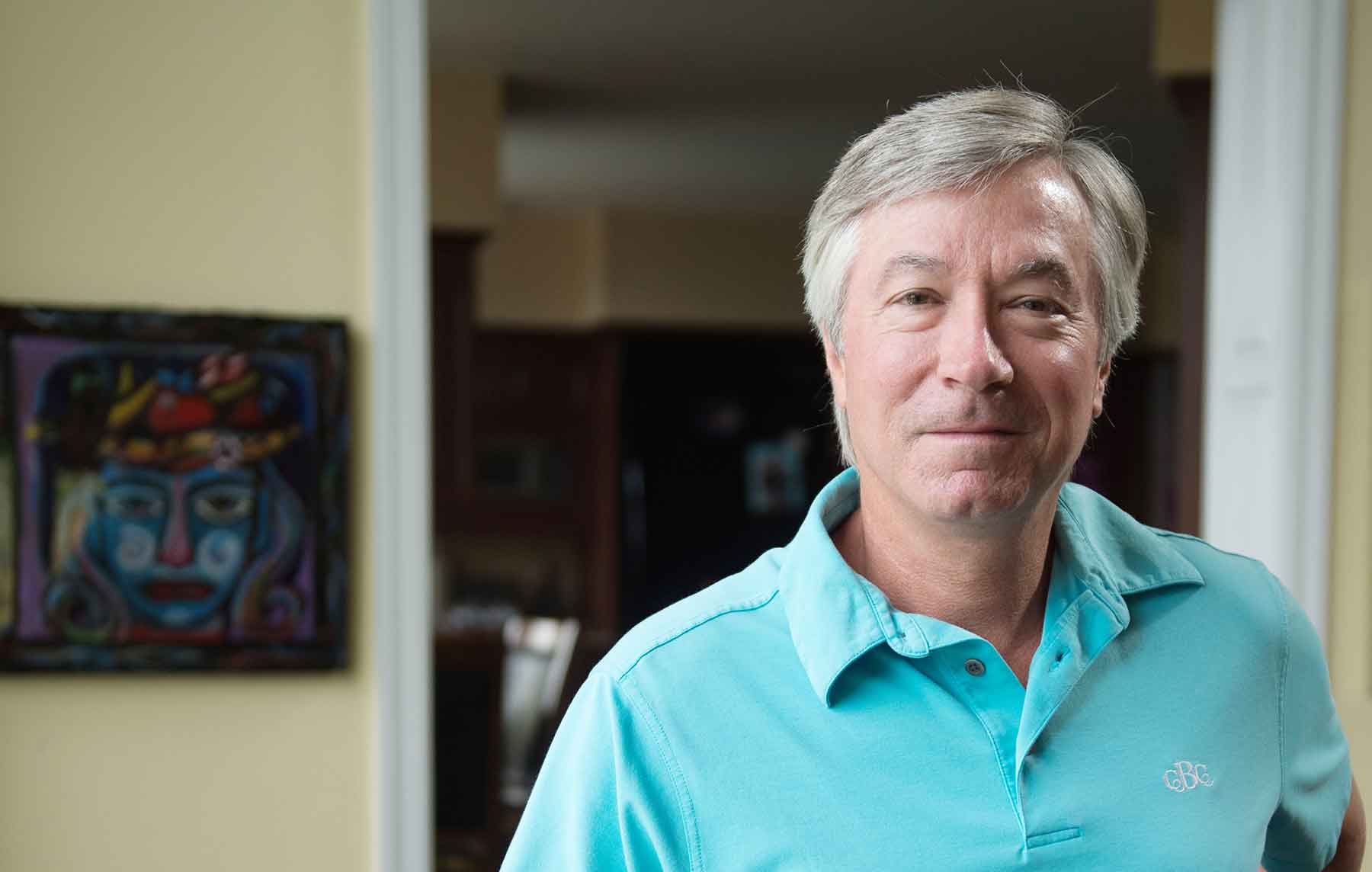 Loren Burnett, chairman and founder of e-Chromic, in his home in Colorado. Photo by Dennis Schroeder

e-Chromic also avoids another problem. Currently, customers who want to embrace electrochromic technology must have their windows removed and replaced. Burnett is banking on winning customers over to his company's product because it can fit over an existing window.

Burnett said e-Chromic intends to have its first product ready in 2017, six years after he founded the company initially known as US e-Chromic LLC. Initial R&D on the technology was done at NREL under a Cooperative Research and Development Agreement that ended in September 2014.

Burnett said putting the film on the interior side will spare the technology from the elements, "plus it's just easier to do. If you're in a 30-story building, instead of having to bring in rigging and all that stuff, we just walk into your office, move your credenza away from your window, clean your window, cut the film to fit your window, put the adhesive on it, put it on, squeegee out the air bubbles, attach your electronics, put your credenza back against the window, and move on to the next office."

Burnett, who previously licensed technology from Columbia University and from James Madison University, was able to capitalize on the Obama administration's Startup America initiative. Begun in 2011, the program was designed to make it easier for entrepreneurs to license technology developed at the Energy Department's national laboratories.

Burnett said it took just 11 weeks to sign a deal with NREL, which he described as the quickest and easiest tech transfer agreement he's been part of. What he received was access to NREL's intellectual property, including an exclusive license for the patents involved, some research, and the knowledge he still had a lot left to do.

"What Loren took out of the lab was pretty rough, as a matter of fact," Eric Payne, senior licensing executive at NREL, said during a panel discussion in March at the annual conference hosted by the University of Colorado's Energy Club; Burnett was also on the panel. "I think a lot of entrepreneurs, when they come to a lab or a university, they're looking for products."

The technology used in the electrochromic window is similar to how a lithium-ion thin-film battery works. Lithium ions move back and forth between conductor layers, and that movement creates a charge. Applying voltage to the layers triggers the formation of a reflective metal layer. NREL researchers theorized this reflective layer might work in electrochromic windows. During initial development, once electricity was applied to a thin-film device, it went to a reflective state and the process couldn't be reversed.

"It was kind of a one-way thing," said Tim Snow, a research scientist in NREL's Chemical and Materials Science Center, whom Tenent brought into the project in August 2012, about a year into the work. "They got stuck there for some time."

Before joining NREL, Tenent and Snow worked together at a startup tech company, ZettaCore Inc., and Tenent was familiar with Snow's ability to find solutions to problems. The problem with the SunStop technology was that the lithium was incompatible with the transparent conductor layers.

"That was the big jump, going from a battery to something you could actually see through," Tenent said.

Snow, who worked alongside e-Chromic senior scientist Judy McFadden and NREL's David Alie, developed a new transparent conductor. The thin metal layer allows the electrical charge to pass through while remaining transparent, and the reflective state can be switched on and off.

NREL and e-Chromic filed for a joint patent on the new electrochromic technology. Alie, who earned his doctorate from the University of Denver while working at NREL, now works for e-Chromic. Before the technology left NREL's lab, proof-of-concept demonstrations were conducted to show how it would work sandwiched between glass and as a flexible film. 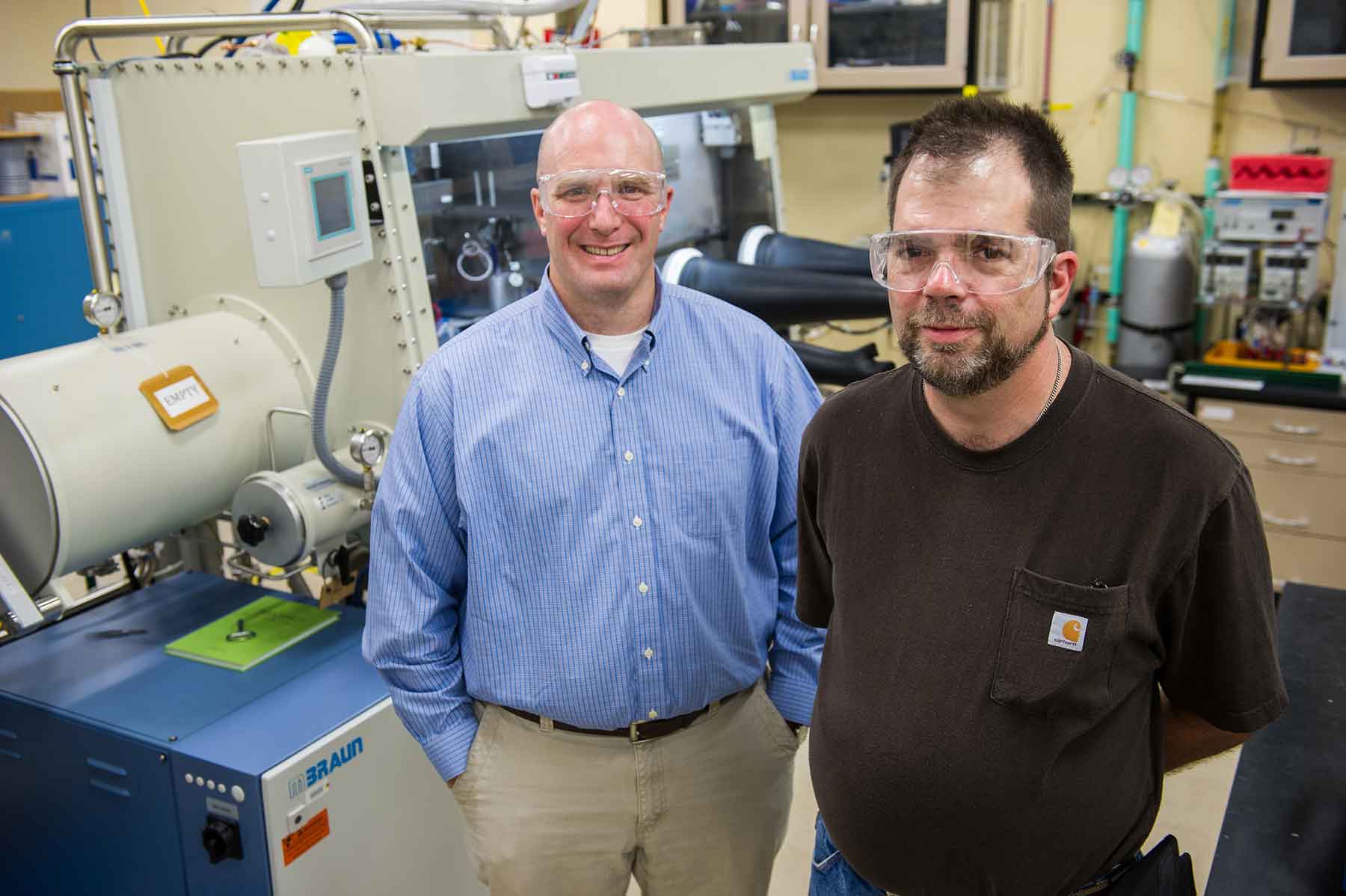 NREL researchers Robert Tenent, left, and Tim Snow collaborate in the Electrochromic Research Lab at NREL's Solar Energy Research Facility. The electrochromic window research they did has been licensed to e-Chromic. Photo by Dennis Schroeder

Burnett Rolls With Plans for Automobiles

Burnett plans to roll out the SunStop technology to commercial buildings first, and eventually to residential customers. But before moving into the housing market, the company intends to work with the automotive industry.

Burnett, who runs the company from his home in Niwot, Colorado, is negotiating with what he will only say is "a large international automobile manufacturer." The manufacturer, he said, is interested in e-Chromic technology for its planned all-electric fleet. Instead of retrofitting an existing window or windshield, the car company would embed the technology directly in the glass. The special e-Chromic glass would reflect infrared, and energy that would previously have been expended to either heat or cool the car would remain in the battery and available to increase the driving range of the vehicle.

"There's also another feature that this company really likes in addition to reducing the air conditioner load and heating load," Burnett said. "There's also a vanity aspect to it. You get out of your luxury car and hit the lock button on your key fob, and all the windows turn diffuse reflective. Then when you come back, you hit the unlock button and they all turn transparent. If your car's been sitting out in the sun in a parking lot in Dallas, instead of getting into an oven, you're getting into a warm car. Plus, it looks really cool while it's reflective—and people can't see in and see that you left a laptop on your passenger seat. So it provides security as well."

The residential market will be the final market e-Chromic enters.

Snow said he understands why some homeowners would want an electrochromic window.

"People who have the million-dollar-view homes in Colorado and Utah looking at the mountains or on the West Coast looking at the ocean, would really like to see the view in the afternoon when they're home," Snow said. "Just when the sunset's happening and everything's really gorgeous, they have to draw their blinds because there's too much heat entering the building."

SunStop can switch from allowing 4% of visible light to come through a window, to allowing 70%.

How quickly e-Chromic's product catches on in homes and offices will depend in part on the price.

"That's likely the biggest problem," said Tenent, adding that industry surveys as well as modeling analyses have indicated that prices for these types of windows would have to fall significantly before the technology could receive widespread market acceptance.

The last time U.S. window manufacturers were surveyed about the subject, in 2000, almost half said their company would likely be interested in offering "switchable products"—a category that covers electrochromics—if their costs were in the range of $11 to $25 per square foot.

Burnett estimated e-Chromic would charge about $20 per square foot to retrofit a window with its technology.

Burnett raised $840,000 from angel investors to help fund continued work on the technology, and in October e-Chromic received a $50,000 venture capital investment after being named one of the country's most innovative startups in the Village Capital Energy accelerator program.