Wendy Cheung presents her poster at the spring SULI poster session at NREL. Cheung completed a 16-week SULI internship this spring, and is now wrapping up an RPP internship. Photo by Dennis Schroeder

Whether helping a bewildered undergrad figure out the campus layout at the Energy Department's National Renewable Energy Laboratory (NREL), advising a grad student on a knotty thesis, or informally demonstrating a unique experimental technique—mentors constantly find ways to keep the lab connected with new talent. Over time, a "circle of mentoring" begins to grow.

Such a network is expanding across NREL through the Energy Department's Office of Science's Science Undergraduate Laboratory Internship (SULI) program for undergraduates, the Research Participant Program (RPP) for interns and postdoctoral researchers, and other NREL internship avenues. Within this space, relationships grow stronger, and a rising generation of scientists, business experts, and support staff emerges to enrich NREL.

James Young knows this by experience. He is part of "four generations" of mentorship, a bond connecting his mentor's mentor, NREL Research Fellow John Turner, to former SULI intern and now NREL Senior Scientist Todd Deutsch, on through James' own mentee, Rachel Terry.

This ripple effect started after Young returned to NREL from the University of Illinois at Urbana-Champaign in 2010 for his second SULI stint, which was his first under Deutsch.

"It was a lot of fun, and really expanded my thinking," Young said. The mentor-mentee link grew, and Deutsch remains Young's advisor as he works to complete his Ph.D. in the Materials Science and Engineering Program at the University of Colorado-Boulder.

Actually, Young might not have been here at all if it weren't for Deutsch. When grad school at University of Southern California turned out not to be a good fit, Deutsch was able to offer an opportunity for Young at NREL. "Todd is a great mentor," Young said. "He makes it a good mix between the fun and interesting aspects of science, and life in general."

As proof of the positive impact, Young then mentored Terry, another SULI intern. "Since James is one year away from getting his Ph.D., I have no idea how he managed his time to spend so much of it helping me," said Terry in her nomination of Young for a mentorship award. "He went above and beyond to aid in my project and my understanding of the material."

Mentees Finding Ways to Give Back 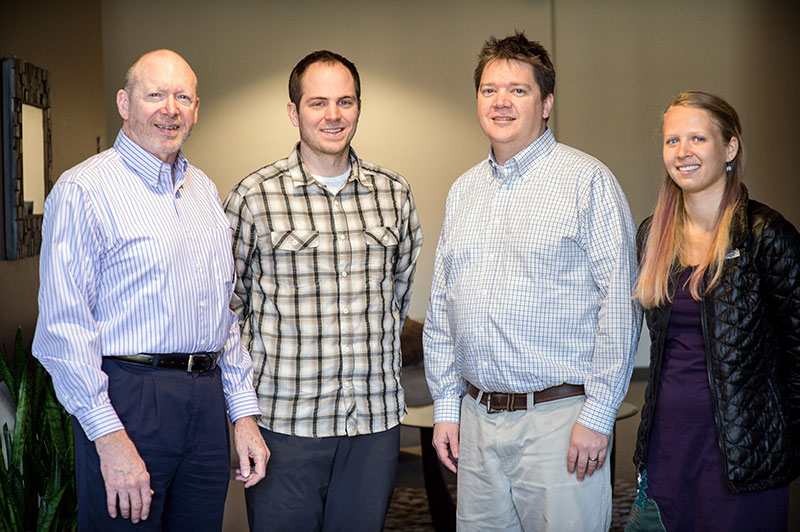 Four "generations" of mentors have passed the torch: from left, John Turner, James Young, Todd Deutsch, and Rachel Terry. At NREL, relationships grow stronger through mentorship, and a rising generation of scientists, business experts, and support staff emerges to enrich the lab.
Photo by Dennis Schroeder

During their lives and careers, many NREL staff have mentors, whether they be formal or informal ones. A positive experience can lead a mentee to give back.

As Lab Director Dan Arvizu told a group of RPP mentors at an Outstanding Mentor Award ceremony: "Throughout school and my career, I have been lucky enough to have been both a mentor and a mentee. On both sides of the equation, there are few things quite as rewarding." Arvizu noted that mentoring up-and-coming teammates can help advance one's career. In the end, the mentor and the laboratory also "benefit from a more engaged, satisfied, connected staff."

Some people seem to gravitate to the role of mentor. Bri-Mathias Hodge fits in that group—and after being at the lab for about five years, he has already impacted quite a few mentees. At last count, he has mentored a half-dozen SULI interns, four grad students, and six postdocs. And Hodge's streak continues as a mentor for Wan Yin (Wendy) Cheung, who completed a 16-week SULI internship this spring, and is now an RPP intern under Hodge through August. "Bri is great," said Cheung—and as proof, he was among those selected for the Outstanding Mentor Award for the Spring 2015 SULI term.

Born in Hong Kong, Cheung moved to San Francisco when she was 14, and then went on to graduate in December 2014 from the University of California, San Diego with an environmental engineering degree. "I didn't really know what was next," she said—and then friend suggested she apply to the SULI program's spring semester in 2015. She listed her experience in solar forecasting and energy efficiency in buildings, and was accepted.

"Currently I'm working in solar forecasting," she said, and eventually she'll return to graduate school—and one day, perhaps return again to NREL in energy systems engineering and renewable energy integration. "NREL's a great place to work. I feel like I learn something every day," she said.

Others share positive reactions. "Bri is passionate about what he does, and his enthusiasm rubs off, helping us grow," said Giulia Gallo, an NREL Director's Postdoctoral Fellow who, along with three others, nominated Bri for an RPP Outstanding Mentor award last fall.

Hodge, who in early 2015 became a section supervisor in the System Planning and Reliability Group in NREL's Power Systems Engineering Center, got a running start as a mentor while he was an RPP postdoc, even before he was formally eligible to be a mentor. A Carnegie Mellon University professor he knew sent a student to work with him in a research visit. Once Hodge became a regular employee, he rolled up his sleeves. "Mentoring does require extra time. But I've been lucky to have some really good people who can work very independently," he said. "So I can just throw ideas at them, and they can go work on them, and come back later."

The interconnections are yielding big gains. Hodge's first SULI mentee, Sandra Shedd, enjoyed her experience here and has gone on to a Ph.D. program in atmospheric science at the Massachusetts Institute of Technology. Nick Steckler, another mentee who came from the University of Washington, wrote Hodge afterwards and explained that before his NREL internship, he hadn't been thinking of graduate school, and wasn't aware of all his career possibilities. His time at the lab changed that, and Steckler is now enrolled in Imperial College in London in a master's program.

Steckler and Shedd exemplify one way mentees give back to NREL. "They are free goodwill ambassadors," Hodge said. Steckler even asked to get some NREL hats to send to him so that he could pass them out to his new classmates and colleagues.

Finding Ways to Mentor, Even Informally 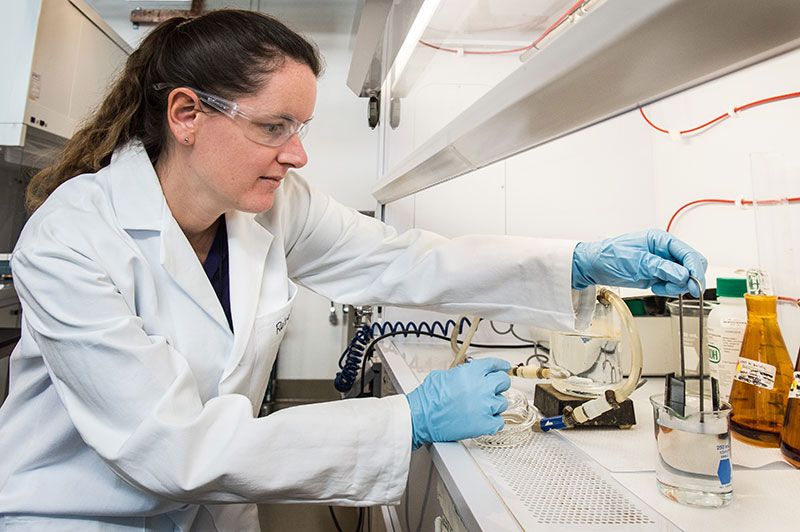 Rebekah Garris has shared her lab expertise and personal experiences as an informal mentor. She came to NREL as a grad intern through the RPP program in 2010, converted to an RPP postdoc in 2013, and became a full-time temporary scientist in early 2014.
Photo by Dennis Schroeder

Check any mentor's background, and they've often been a mentee themselves, making them natural choices for the role they've seen modeled. Rebekah Garris—who came to NREL as a graduate intern through the RPP program in 2010, converted to an RPP postdoc in 2013, and became a full-time temporary scientist in early 2014—has always had top-notch advisors.

"I have been lucky with good mentors all along: undergrad, grad school, and then here," she said.

Because she performs a special procedure that is key to solar cell testing, she has acted as a resource for SULI interns. "I will show the students how to do [a chemical bath] and talk through the different variables we are looking for, and why we are doing things that way," Garris said.

And like all good teachers, she offers to answer any and all questions—including inquiries about what life is like after grad school or how it is to work at NREL—and shares her contact information in case something comes up. She's been in their shoes and knows how others treated her. "There could have been times along the way when it seemed like hitting a brick wall, but if you know somebody you can call and ask who will actually talk to you—that makes a huge difference in overcoming obstacles along the way," she said.

Across NREL, the circle of mentorship continues to expand—paving the way for more mentees to become mentors in the future.