NREL uses its surface analysis cluster tool for the in-situ study of surface chemical changes that occur during growth and processing of materials under various conditions.

This tool enables us to better understand reactions and kinetic processes at surfaces. 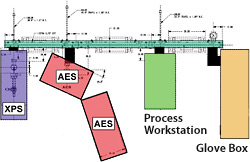 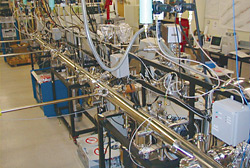 The surface analysis cluster tool was designed and built by NREL for the in-situ study of surface and chemical changes.

Spectra from an as-received (in red) Cu(In,Ga)Se surface are compared to spectra from the aqueous ammonia treated (in black) surface.

The cluster tool can be used to study the effect of various chemical treatments on surface composition without compromising the treated surface by exposing it to air prior to analysis. Here we illustrate the surface cleaning effect of an aqueous ammonia treatment on a Cu(In,Ga)Se2 surface. Aqueous ammonia is a component of the chemical bath used to deposit cadmium sulfide for CIGS device formation. The as-received film was exposed to aqueous ammonia in our glove box and then transferred directly to the XPS via the transfer system without exposure to air. The spectra show the surface oxygen contamination is removed and the metal content of the clean surface approaches that of the bulk film.