The availability of low-cost financing is a critical factor for achieving cost-competitive solar energy. Reduced interest rates, extended term lengths, and low or no money down finance offerings can help ensure that solar adopters achieve energy bill savings, provide pricing certainty, and enable investors to achieve attractive investment returns. Green Banks are one mechanism used to deploy low-cost capital for solar energy projects by offering favorable rates and terms to both traditional and underserved markets. According to the Coalition for Green Capital (CGC)—a non-profit Green Bank advisory organization—a Green Bank is fundamentally “a focused institution, created to maximize clean energy adoption.” Green Banks are often established to complement existing financing institutions by attracting and leveraging private capital that otherwise might be unavailable to a particular market or segment.

Based on the early successes of these leading clean energy finance institutions, there are a number of other jurisdictions in the United States exploring the formation of a Green Bank as well as several international development efforts underway.

There are a variety of financial products that may be offered by a Green Bank. These products can be targeted to end users such as a home or business owner as well as other finance providers such as retail and investment banks. Connecticut Green Bank, for example, has driven growth in its residential and commercial segments through a residential solar loan and lease program, credit support mechanisms (e.g. credit enhancements) for energy efficiency and solar , and a commercial property assessed clean energy (PACE) product for a variety of different energy conservation measures. The New York Green Bank offers a similar product list which includes credit enhancements, a multi-developer aggregation service (bundling of multiple smaller solar investments), traditional loans, and combination product of the above. A generalized representation of the types of products offered by Green Banks is shown below (image courtesy of Connecticut Green Bank). Through these products, Green Banks can help to help secure private capital by a number of different means including lowering risks or reducing transactional costs. 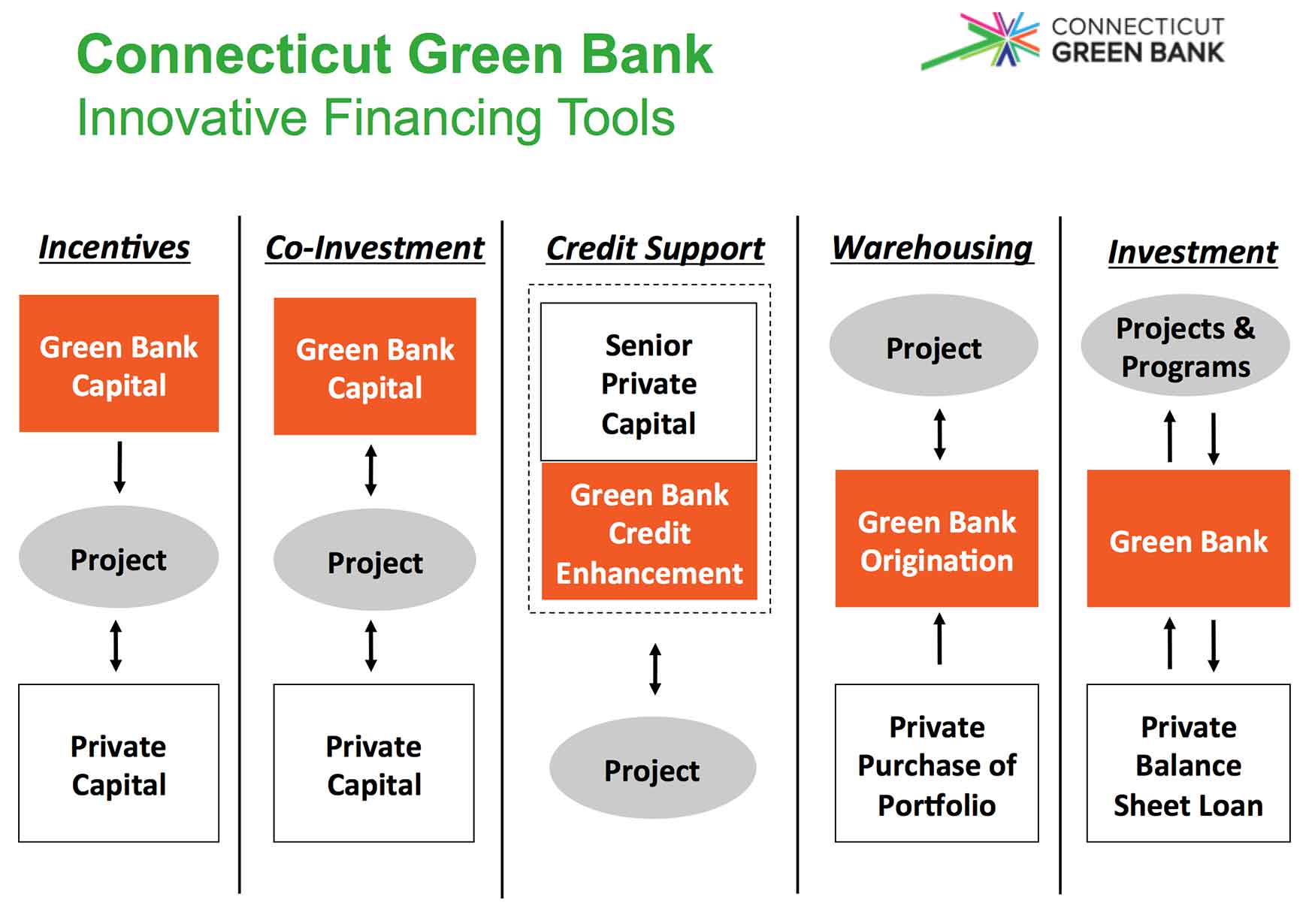 State and local governments have established Green Banks under a variety of different structures, legislative directives, and funding sources. For example, Connecticut Green Bank is capitalized by a $.001/kilowatt-hour (kWh) surcharge to households in their electricity rates (resulting in a surcharge of about $10 per year per household), while the Montgomery County Green Bank received an approximate $14 million grant from the county that was part of a local utility merger process. As another example, the State of Nevada recently enacted the Nevada Clean Energy Fund (another term for a Green Bank) that established the authority and charter for the institution, but requires the Fund’s Board of Directors to be responsible for securing the necessary startup and capitalization dollars to launch the fund. Under the Nevada Clean Energy Fund model, a number of different sources can be targeted for startup and capitalization of the fund, including federal, state and private grants and bonds, and foundational support and high net worth individuals among others. In general, the implementation of a Green Bank typically follows a process of an early startup phase in which the institutional processes are put in place followed by a launch of the initial product to eventually expansion into multiple products and sectors.

In July of 2017, NREL, CGC, and the Nevada Governor’s Office of Energy co-hosted a one-day workshop with a number of Nevada stakeholders that was a key first step in implementing the Nevada Clean Energy Fund. The discussions centered around the Clean Energy Fund’s organization structure, governance, board members and the desired knowledge base, long term funding options, and consideration of the different potential products to be offered. The workshop materials can be found here.

Despite a comparatively short track record, Green Banks have proven to be an effective mechanism for deploying capital. As of 2016, the most mature Green Banks in the country, in Connecticut and New York, have collectively invested nearly $575 billion in total clean energy investment. These investments also mobilize private sector investment into a project by reportedly three to six times the amount of public sector dollars at work. The ability to attract and leverage a greater amount of private dollars is often one of the hallmarks and typical motivations for establishing a Green Bank.

The information on this page is sourced from Nevada Clean Energy Fund Workshop Materials.