The SEEDS 2014–2016 study, funded by the U.S. Department of Energy's SunShot Initiative, brought together an interdisciplinary team of researchers from Lawrence Berkeley National Laboratory, NREL, Portland State University, Social and Environmental Research Institute, Spruce Finance (formerly Clean Power Finance), University of Arizona, University of Colorado, and the University of Michigan. A major part of the study was a series of surveys to understand why consumers do or do not adopt solar. 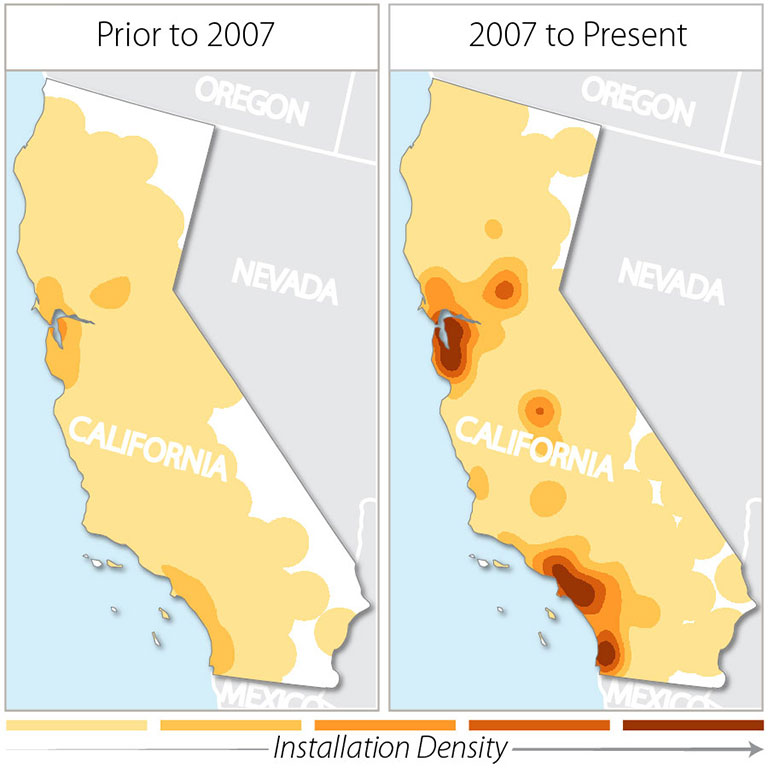 SEEDS research seeks to understand and predict spatial patterns of solar adoption, such as the growth of solar installations across California over the past two decades.

The project team gained a unique perspective by working closely with several leading PV installers to get a frontline view of how solar is being pitched and sold to prospective customers. This access to installers, leveraged through the market connections of an industry partner—Spruce Finance—provided insights into how consumers perceive the costs and benefits of solar, as well as the concerns and difficulties that discouraged their adoption.

The study's research was uniquely focused on four U.S. regions to identify general and region-specific trends in customer motivations for adopting solar. This allowed the project to identify which market inferences can be extrapolated to other regions and which are specific to individual regions.

The project's research is also unique in that it collected several types of new market information, including:

This information was used to develop a much more comprehensive understanding of solar adoption dynamics and will be a lasting addition to the literature. For the project team's summary on some of the study’s biggest findings, see Seven Common Mistakes Solar Installers Make.

The SEEDS 2014–2016 study collected new survey data from 3,600 households spanning several active markets—Arizona, California, New Jersey, and New York. The data was the first of its kind to examine the full range of solar adoption (activation of interest, consideration, adoption, and rejection) within a consistent framework. A de-identified version of the survey data is available on NREL's Data Catalog.

The market data revealed that:

The project also developed new agent-based models to understand drivers of individual and aggregate-level solar adoption. These models permit sophisticated simulations of how customers might respond to new policies and market conditions. For more information, see the Distributed Generation Market Demand Model and Using Willingness To Pay to Forecast the Adoption of Solar Photovoltaics: A “Parameterization + Calibration” Approach, Energy Policy (2019).

The study tested three theories that may explain the decision to pursue solar among the general population: value-belief-norm theory, the theory of planned behavior, and diffusion of innovations theory. The project found support for each theory, suggesting that consumers are seeing solar electricity in multiple ways: as an environmental benefit, a consumer good, and as an innovative technology. The team then proposed and tested an integrated framework that combines all three theories. The results indicated that individuals who trust installers and believe solar will be personally beneficial are more likely to consider contacting an installer, as are individuals drawn to novel products. Pro-environmental personal norms indirectly increase interest through perceived personal benefits, suggesting that marketing efforts aimed at environmentally concerned individuals may need to emphasize non-environmental benefits. The results also support leveraging trusted social networks to convey the benefits of solar.

The project found that a large fraction of current adoption is spurred through opportunistic events (e.g., an installer knocking on their door) or specific triggers (e.g., a higher than expected utility bill). This contrasts previous research, which has framed the adoption decision largely as a pre-meditated act.

A large fraction of consumers have not seriously considered solar for their home, so installers may increasingly find they need to convince and educate homeowners concerning the benefits and costs of solar.

Economic considerations are the biggest overall driver of interest in and adoption of solar. But other factors are at play, which suggest that sales conversion is a layered process, depending on customers' familiarity with solar. As customers become more aware of solar the nature and sophistication of their concerns evolve, so installers should address these concerns sequentially.

At any given time, there are nearly 10 times as many prospective solar customers who do not adopt, as there are adopters. However, only 11% of "considerers" have stopped shopping for solar altogether. The rest are either still considering it, or have decided they want solar but have yet to sign. On average, solar installers convert 1%-10% of leads, so minor increases in conversion efficiency could significantly expand sales.

Coming up with the money to go solar was the most common difficulty that stopped consideration (49% of considerers), followed by finding a trustworthy and competent installer (32%), and home suitability (30%).

Read the full article, How To Turn Solar Considerers into Solar Adopters, GreenTechMedia (2016).

Current solar adopters are overwhelmingly satisfied with both solar and their installers as compared to a wide range of comparable products or services. However, it is unclear whether this high satisfaction is a durable phenomenon or an artifact of cognitive dissonance or the passion that is typical of early adopters.

The survey showed that the biggest factor influencing satisfaction was whether or not customers felt they got the economic savings they expected.

Eighty percent of survey respondents made a referral of some kind. The median number of referrals was 3.

Read the full article, How To Improve the Solar Customer Experience and Get More Referrals, GreenTechMedia (2016).

A methods paper in Nature Climate Change discussed the role of agent-based modeling (ABM) in analyzing energy systems. The paper argues that ABM is a powerful tool for representing the complexities of energy demand, such as social interactions and spatial constraints. Unlike other approaches, ABM is not limited to studying perfectly rational agents or to abstracting micro details into system-level equations. Instead, ABMs provide the ability to represent behaviors of energy consumers using a range of theories, and to examine how the interaction of heterogeneous agents at the micro-level produces macro outcomes of importance to the global climate. ABMs can improve our understanding of both fundamental scientific and applied aspects of the demand side of energy to aid the design of better policies and programs. Read the full paper, Agent-Based Modeling of Consumer Energy Choices, Nature Climate Change (2016).

Using the new survey data to calibrate national models of solar adoption, the SEEDS 2014–2016 study found that the residential sector is expected to grow more quickly than the non-residential sector, with a median timeline of 37 years to 90% saturation in the residential sector, compared to 46 years in the non-residential sector. The study also found a de-emphasized role for innovation effects (external influence or advertising effect) in the diffusion of solar than has previously appeared for other novel technologies. However, the imitation effect (internal influence/word-of-mouth) plays a larger role in solar adoption. Read The Distributed Generation Market Demand Model (dGen): Documentation, NREL Technical Report (2016).

Monthly bill savings (MBS) has supplanted payback period as the primary financial metric that consumers currently use to evaluate solar economics. MBS is an intuitive metric for consumers because they can easily use it to relate solar bill savings with their monthly utility bill. These survey data were used to calibrate customer "willingness-to-pay", or potential demand for solar for different price points. Read the full article, Using Willingness to Pay to Forecast the Adoption of Solar Photovoltaics: A “Parameterization + Calibration” Approach, Energy Policy (2019)

The first market pilot tested whether aggressive sales practices affect solar conversion rates using digital marketing, though our sample size was too small to make a conclusive finding. Specifically, the SEEDS team encountered very low "click" rates for the experimental digital sales and advertising (~0.05%), which implies that large sample sizes would be required for significance testing. Though the solar industry does experimentally test marketing hypotheses, the stringency of proof is often lower than what would be required for an academic publication.

The second market pilot tested three potential strategies for increasing lead generation rates in digital marketing—framing solar benefits as an avoided loss or as savings, how to frame the timing of solar benefits (monthly, annual, or lifetime savings), and the amount of information displayed in the advertisement. The results provide mixed evidence that displaying more information on the advertisement, or emphasizing savings over an annual basis, as compared to a monthly frame, may be effective ways to attract new customers.

Watch videos and download presentations from webinars about the SEEDS studies.

The following partners collaborated with NREL on the SEEDS 2014–2016 study.

Learn more about the U.S. Department of Energy SEEDS program.