Solar and Agriculture Pair Well Together, Thanks to Planning and Cooperation

It is hard to find a flock of sheep nestled under an array of solar panels.

"Sheep are late risers. You won't hear them when you enter the site for an early morning walk. What you hear first are insects: crickets, little frogs. It feels alive to you," said Lexie Hain, a farmer in the Finger Lakes region of New York and director of agrivoltaics for Lightsource bp. "The flock loves to lie under the panels, so finding them often involves an element of surprise."

Hain grazes sheep underneath solar photovoltaic (PV) installations. Her flocks keep the plants under the rows of PV panels trimmed, saving the installation's owner the cost of mowing. And Hain's sheep get to eat for free (and may even be paid for it).

This concept—of using PV installations to both create renewable energy and provide space for local agriculture or native habitats—is known as "agrivoltaics."

Both solar developers and those in the local community who care for the land—whether as farmland, rangeland, or native habitats—can benefit from agrivoltaics. And when all sides understand how they can benefit each other, low-impact solar development becomes easier.

Letting Solar and Agriculture Work for Each Other

These are among the most important findings of an ongoing agrivoltaics research project called Innovative Solar Practices Integrated with Rural Economies and Ecosystems (InSPIRE).

Led by the National Renewable Energy Laboratory (NREL) and funded by the U.S. Department of Energy's Solar Energy Technologies Office, InSPIRE has just completed its second, three-year phase of research into the synergies between solar energy and agriculture.

In its first phase, InSPIRE tried to quantify the benefits of agrivoltaics and record some early best practices in the emerging field. The project adopts a big-tent approach to agrivoltaics, welcoming any dual use of solar-occupied land that provides ecological or agricultural benefits. That could mean grazing cattle or sheep, growing crops, cultivating pollinator-friendly native plants, or providing ecosystem services and restoring degraded soil.

Beneath Solar Panels, the Seeds of Opportunity Sprout

Read this 2019 NREL story about the first round of InSPIRE to learn how agrivoltaics could be a win-win-win for food, water, and renewable energy.

For InSPIRE's second phase, NREL and dozens of partnering organizations carried out agrivoltaics field research across the nation to study what makes an agrivoltaics project successful.

"Through our work, which spans multiple regions, configurations, and agricultural activities, we've seen so many initial promising results," said Jordan Macknick, NREL's lead energy-water-land analyst and principal investigator for the InSPIRE project. "Now, our challenge is to figure out how to scale up and replicate these successes." 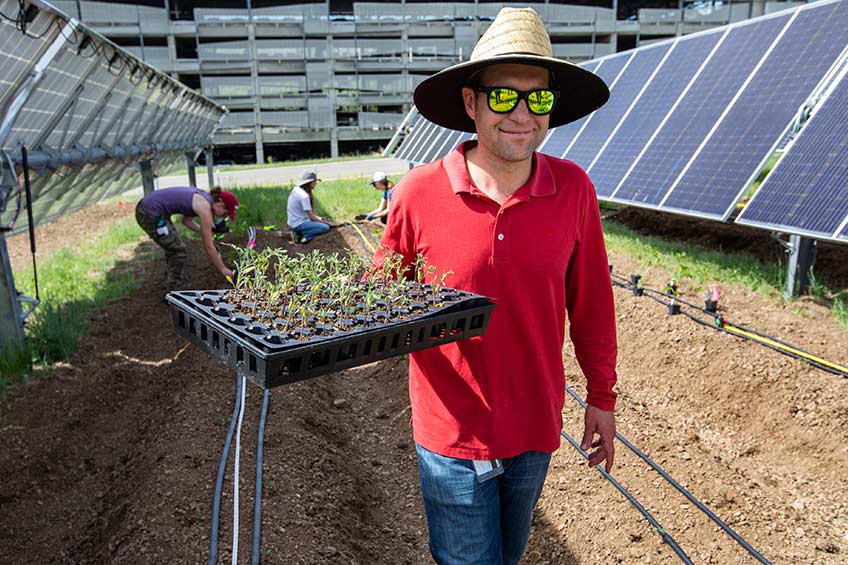 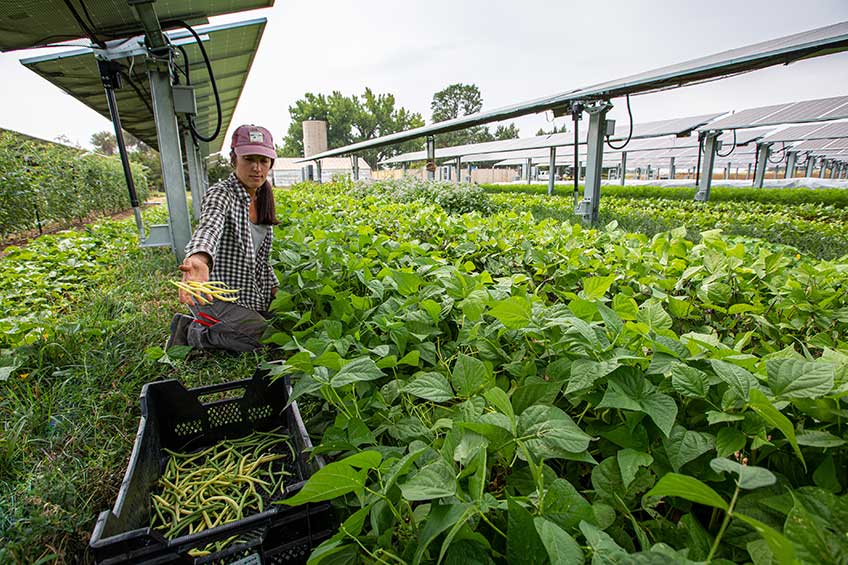 Jack's Solar Garden is a partner organization on the InSPIRE project and the largest commercially active agrivoltaics system in the United States. The 1.2-megawatt array generates enough power for more than 300 homes. Local nonprofits also use the space as pollinator habitat and to train young farmers, such as Brittany Staie, pictured here. Brittany was the farm manager at Jack's Solar Garden before joining NREL as a research intern. Photo by Werner Slocum, NREL 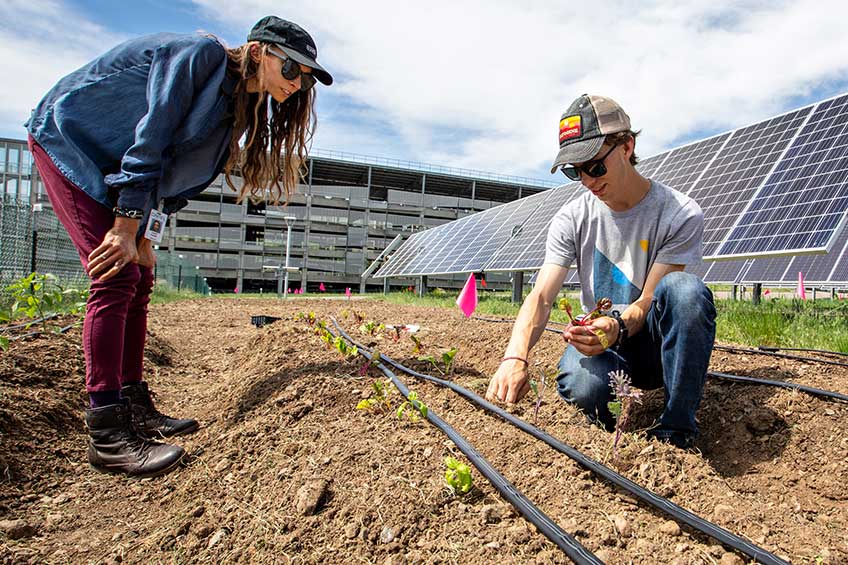 NREL staff members plant crops under a field of solar panels on the NREL campus. The site is used to test the effects of different ground covers on panel energy production. Photo by Werner Slocum, NREL 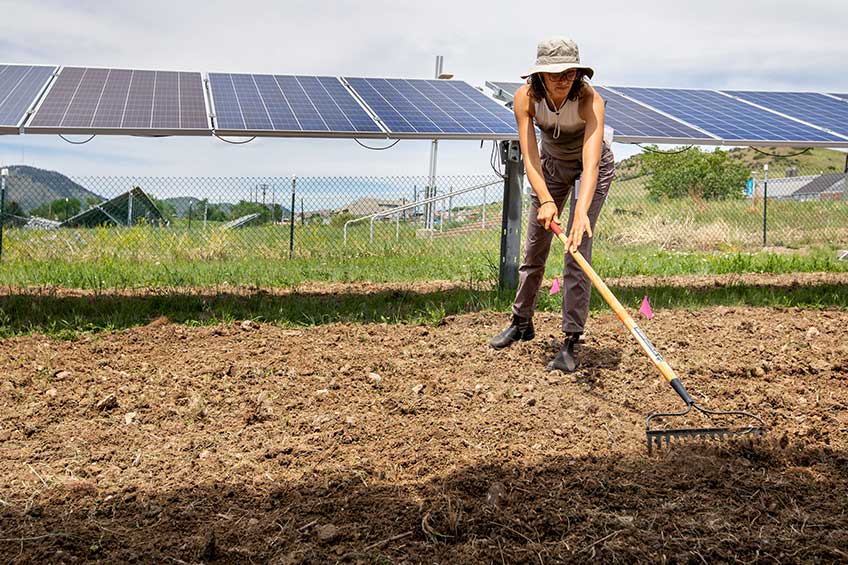 NREL environmental engineering undergraduate Abigail Brown rakes soil over flower seeds at what will be the pollinator habitat at the Photovoltaic Central Array Testing Site (PV-CATS) on NREL's South Table Mountain campus, as part of the InSPIRE project. Photo by Werner Slocum, NREL 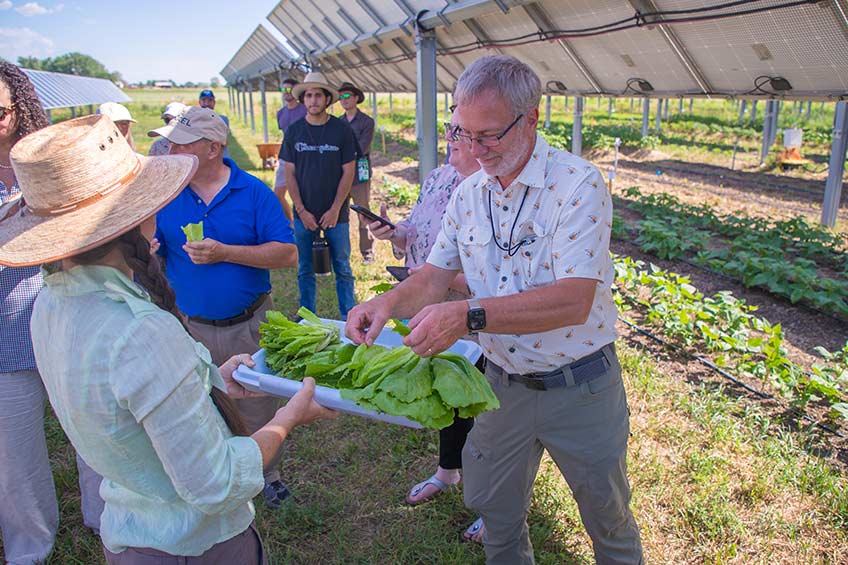 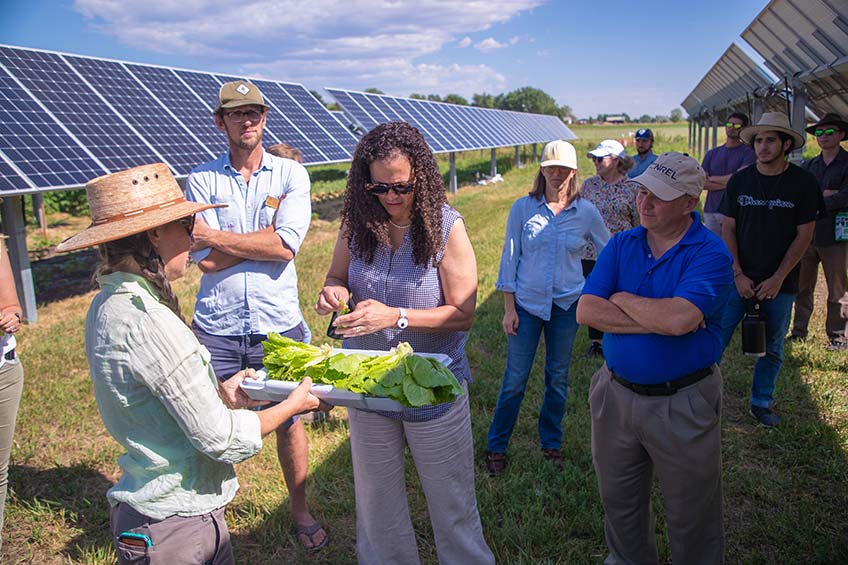 Kelly Speakes-Backman, principal deputy assistant secretary for the Office of Energy Efficiency and Renewable Energy (EERE) at the U.S. Department of Energy, tastes the difference between the control group lettuce and experimental lettuce grown in the agrivoltaic facility at Jack's Solar Garden. Photo by Joe DelNero, NREL

Across the many different types of solar and agricultural sites that participated in InSPIRE's second round, a key lesson emerged: Partnerships matter. Agrivoltaics is not necessarily more expensive than traditional solar development, but it can be more complex.

A successful agrivoltaics project requires two or more groups­ who often have very different priorities—the farmer or land manager and the solar developer—to find a solution that works for both. Local community acceptance is also important.

"Solar projects are commonly built on agricultural lands, which then creates the challenge of balancing food security with increasing renewable energy production," said Brittany Staie, an NREL research intern studying decarbonization of the agricultural sector. "Agrivoltaics gives us the opportunity to explore growing food while also producing clean electricity on the same piece of land."

What Matters: "The Five C's" of Agrivoltaics

A recently published NREL report breaks out each of the "five C's" in detail, reflecting the many lessons learned during the last three years of InSPIRE research.

But, as a major research institution, NREL did not focus only on lessons for solar developers, farmers, and landowners. InSPIRE also captured lessons for agrivoltaics researchers. Just as solar developers and landowners need to communicate and understand each other's goals and concerns, agrivoltaics researchers must also coexist under the panels. The latest InSPIRE report is full of suggestions for how to make that happen.

What about the local impacts of solar on water runoff?

A companion project to InSPIRE, Photovoltaic Stormwater Management Research and Testing (PV-SMaRT), looks at the impacts that solar installations can have on how water collects on and moves through the landscape. Currently, many local regulations treat solar installations similar to parking lots with respect to water runoff, requiring the solar projects to install large drainage basins and other infrastructure to capture water runoff from rainstorms. However, the soil and vegetation underneath these panels can absorb much more water than a paved surface and can play an important role in reducing erosion.

NREL's PV-SMaRT project is conducting field research at five sites across the country to measure how water runoff occurs at solar installations, including how construction techniques and vegetation can impact water runoff. This research could help local and state governments set new regulations that require smaller drainage basins for future solar installations, reducing the cost of solar energy.

From the start, InSPIRE has acted as a home for the American agrivoltaics community. Now, that community is expanding. PV installations are expected to require between 4 and 10 million acres of land by 2050, with flat, sunny farmland making up some of those acres.

"One thing InSPIRE has done really well is to create a community of people who are thinking differently about PV solar design and management. Universally, following an InSPIRE conference call hearing scientists and industry practitioners share their results, there’s tremendous energy and optimism for the challenge and opportunity ahead of us," said Rob Davis of Connexus Energy, the Midwest’s largest electric co-op. Davis is a member of InSPIRE's multisector community advisory group, Agriculture and Solar Together: Research Opportunities (ASTRO), which also recently released a report summarizing its impact.

InSPIRE already represents the largest, longest-running, and most comprehensive agrivoltaics research effort in the world, having supported agrivoltaics site design or ongoing research at 28 sites in 11 U.S. states, Puerto Rico, and the District of Columbia. Some of these sites involve direct research, some involve research design and consideration, and some involve ongoing consultation and mentoring of partners.

For its third round of research from 2022–2024, InSPIRE is focusing on expanding the agrivoltaics research community and creating foundational resources to support the community nationally and internationally. These efforts include partnering with the AgriSolar Clearinghouse to support landowners and farmers interested in adopting agrivoltaics.

"As research interest in agrivoltaics grows, the InSPIRE project is transitioning from being the main source of research to enabling all the others who are doing agrivoltaics research," Macknick said.

In 2022, InSPIRE began tracking all agrivoltaics projects across the United States. The project will also host workshops for the research community and will develop agrivoltaics research protocols and a road map for future research. InSPIRE will also be adding more research sites in more places—for example, on tribal lands in partnership with Indigenous communities.

In June 2022, InSPIRE added its 29th research site. Working with other solar research colleagues (and staff volunteers) at NREL, the InSPIRE team planted a half-acre garden under a set of solar panels on NREL's main campus in Golden, Colorado. The site will study how plants like tomatoes, peppers, kale, and native grasses and flowers grow underneath panels in Colorado's arid Front Range region.

The solar panels overhead are part of a different NREL experiment, which studies how changes in the ground surface can reflect more or less light onto two-sided (or "bifacial") solar panels that absorb light bounced up from the ground. In this two-for-one project, InSPIRE gains a new test site, while NREL's PV field performance team is able gather data on how crops reflect light back onto solar panels.

"Bifacial technology represented at least half of utility-scale installations in 2021," said Silvana Ovaitt, an NREL PV reliability researcher. "Pairing these panels up with crops to study the interactions between plants—creating a microclimate and modifying the ground albedo—and bifacial modules on trackers—creating shading for the plants through their tracking—is of great relevance for the PV community seeking to maximize agricultural and solar performance."

But the new site on the NREL campus means even more than that.

"I'm excited to have an agrivoltaics site right here on our home campus," Macknick said. "We get to involve the whole NREL community and their capabilities, which will advance the state of the science. And we'll be able to serve the produce we grow in the community, so everyone can actually taste the fruits of our science."

To learn more, read the InSPIRE synthesis report and the ASTRO report.