"It Was a Grand Experiment, and It Worked"

The Evolution of IEEE Standard 1547, From Two NREL Engineers Who Paved the Way for Its Creation and Revision 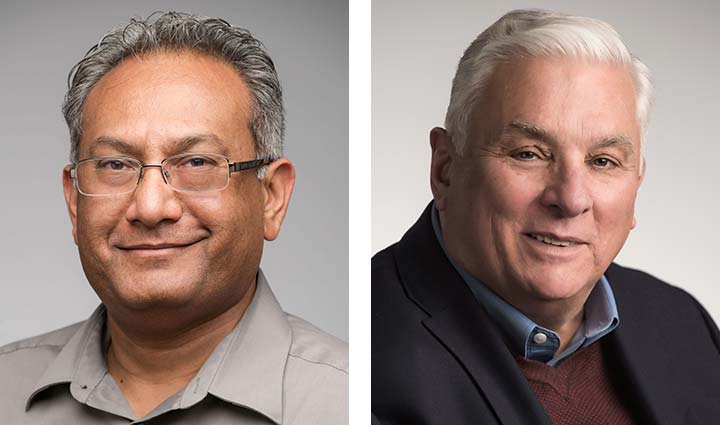 David Narang, left, and Richard DeBlasio, right, are two of the pioneers behind IEEE Standard 1547 and its 2018 update. Photos by Dennis Schroeder, NREL

Developing a flagship standard used across the United States and around the globe that provided the first technical standards for interconnecting distributed energy resources (DERs) into the grid was no easy task in 2003. Neither was revising this same Institute of Electrical and Electronics Engineers (IEEE) Standard 1547 in 2018. Just ask the two electrical engineers who led these efforts.

Richard (Dick) DeBlasio, senior research fellow emeritus at the National Renewable Energy Laboratory (NREL) and creator of the original IEEE Std 1547, and David Narang, chairperson of the revised IEEE Std 1547-2018, talked with us about the standard’s origin story and revision.

What are some key differences between the original and the revised standard brought about by new technologies and other changes in the 21st century?

David: The first iteration was in 2003. If you look at the curve of DERs and implementation around the world, not just in the United States, you will quickly see the rise and prominence of DERs, with more and more installations going in. Along with that came new expectations for how these devices should behave on the grid. Today’s expectation is that they will behave like traditional generation assets and support the grid under normal and abnormal conditions. The main difference between then and now is the expectation for DER good behavior.

Dick: One problem in the beginning was bringing the industry together; there were a lot of doubts about getting it done on a national level. IEEE agreed to write a standard (I was the chair), and the U.S. Department of Energy (DOE) supported NREL financially to create it. Because knowledge was fairly limited in the early 2000s, the toughest part was bringing utilities and manufacturers together. But in 2003, we developed the minimum requirements for interconnection.

The newer standard deals with more advanced technologies in communications and controls. These capabilities have advanced the ability to interconnect with the grid and also to get involved with smart grid technologies for autonomous operation. With IEEE Std 1547-2018, David and the other talented electrical engineers developed the unbelievable ability to communicate and control distributed generation with the utility and with appliances and other sources within interconnected applications. They did a grand job, and David should be commended for getting the job done.

How did the original IEEE Std 1547 come into existence?

Dick: NREL received a $250,000 grant from DOE in 2000 to create a DER interconnection standard. These funds paid for meetings with IEEE every 2 months for 2 years. We had more than 400 members, and this collaboration accelerated the standard’s development. It was a grand experiment, and it worked. After 10 years, we had grown to a multimillion-dollar program at NREL, and this original project started the lab on the path to conduct interconnection and integrated research.

David: I personally think Dick’s work was really visionary because he could conceive of a future where all these devices would interact. Dick started the standard, but he also started

the IEEE Standards Coordinating Committee 21, which researches DERs, energy storage, and other devices. To coordinate effectively among different disciplines in IEEE and other societies that previously had not coordinated is a major accomplishment—we have the problem of silos everywhere. But this committee ended up becoming the sponsor for 1547 and remains to this day a great group to coordinate the IEEE, cutting across many device and application developments that hadn’t occurred before. I have to credit Dick for that too.

Dick: We can thank DOE and the industry for the evolution of what we’ve been able to do.

How did NREL’s leadership role and resources contribute to the standard’s development and revision?

David: NREL has chaired the standard since the time Dick started, and we work closely with an officer team from other entities that lead subgroups with wide-ranging topic areas and bring other stakeholders together to build industry consensus. NREL’s Andy Hoke is chair of the testing and certification counterpart of 1547: IEEE Std 1547.1. Here, we thoroughly provide the testing procedures for the requirements of the base standard to be sure the DERs are going to behave as we intend in the standard. We also leveraged the great testing facilities at the Energy Systems Integration Facility so we could correctly calibrate the requirements being written in the standard.

Dick: The 1547 standard story is also a tremendous story of NREL—with its great technology capabilities and leadership—they did something that was important for the industry rather than superficial.

What are your final thoughts about your work in creating and revising IEEE Std 1547?

Dick: I think what we’ve managed to do in the past two decades is wonderful, and my hope is that David and the rest of the team will get the smart grid IEEE Std 2030 and IEEE Std 1547 further integrated.

David: Dick mentioned that convincing people early on to come to a consensus on the use and application of these devices was very important. To do this, all of our testing was absolutely critical—and continues to be—to show people what the possibilities are. There are very few facilities and very little research that is publicly available that can educate people and show them how these devices will behave. Using the national labs and their testing facilities that way to provide free, publicly available information on these very technical capabilities, and having the technical foresight to develop the test plans, take the measurements, and then write it all up—these are absolutely critical to getting people to buy into the standards in the initial stages.

We’re grateful for continued support from DOE, through which we were able to develop and publish educational materials on the standard hosted on NREL.gov at https://www.nrel.gov/grid/ieee-standard-1547.