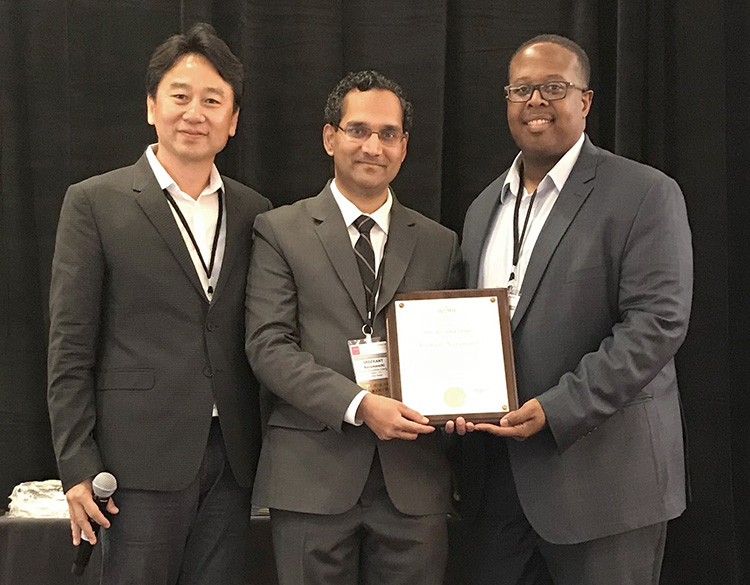 Each year the American Society of Mechanical Engineers (ASME) elects a winner for the K-16/Electronic and Photonic Packaging Division (EPPD) Clock Award. Advanced Power Electronics and Electric Machines (APEEM) Team Leader Sreekant Narumanchi of the Transportation and Hydrogen Systems Center (THSC) has received this honor for 2018. He is the first NREL researcher chosen for the distinction.

Narumanchi was nominated by a fellow researcher at Stanford University and supported by peers at General Electric, Intel, and Georgia Tech.

Established in 1995, the award is decided by the K-16 Committee for both the Heat Transfer Division and Electronics Packaging and Photonics Division, and recognizes outstanding and continuing contributions and excellence in the area of science and engineering of heat transfer in electronics.

Thermal management to improve heat transfer in electronics continues to be a growing field as components used in applications ranging from computer electronics to electric vehicles are required to be smaller, more affordable, and more powerful. NREL’s Advanced Power Electronics and Electric Machines (APEEM) team has expertise in thermal, electrothermal, mechanical, and reliability aspects of power electronics and electric machines for electric-drive vehicles, as well as for other energy efficiency and renewable energy applications.

Since 2004, the team has published over 130 peer-reviewed journal articles, conference papers, and book chapters. Narumanchi recently served as a Guest Editor for both Part 1 and Part 2 of a Special Selection on InterPACK 2017 in the Journal of Electronic Packaging. Narumanchi has also been appointed as an Associate Editor for the Journal of Electronic Packaging from 2018–2021.