Remember the Algae that Went to Space? Here’s What Happened Next 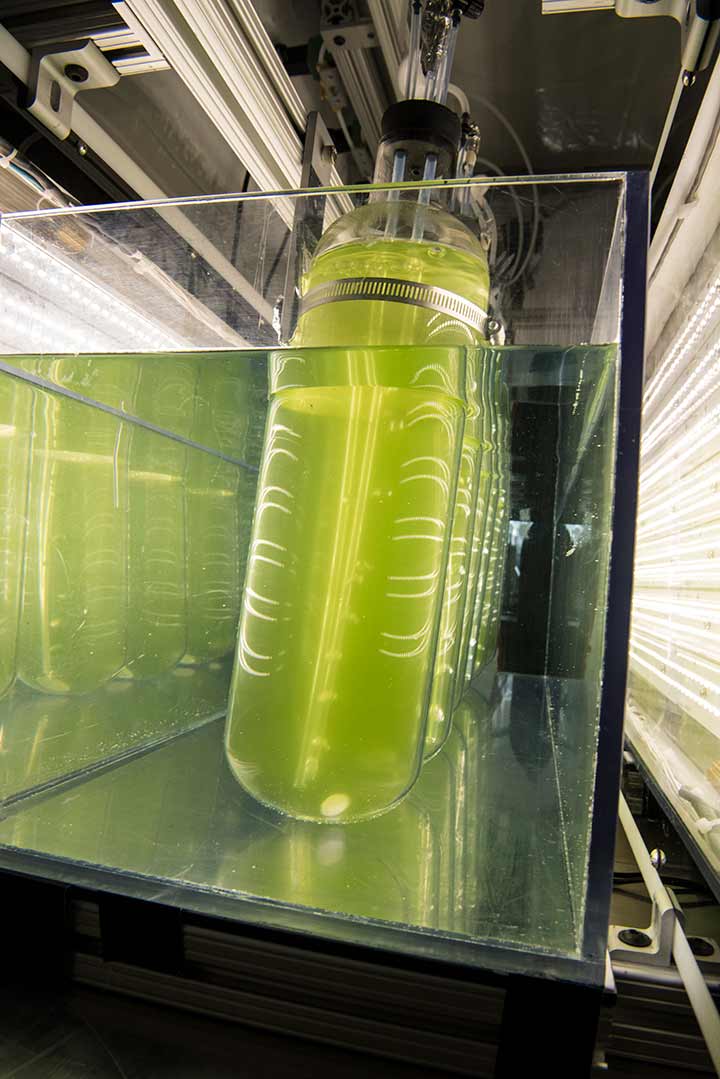 The Simulated Algal Growth Environment Reactor was used to generate the seed culture for the Chatfield High School students. Photo by Dennis Schroeder

The word Joel Bertelsen uses is “wow.” What else can you say about an experiment that began in a high school classroom and wound up aboard the International Space Station?

A teacher at Chatfield High School in Colorado’s Jefferson County, Bertelsen witnessed the launch last summer of a SpaceX rocket carrying a novel bioreactor designed and built by the engineering students and housing two different species of algae.

If all went well—and he knew first-hand that wasn’t guaranteed—the two algae species would prove capable of making the precursors for fuel. He could have had his answer in 2015, except the unmanned rocket carrying the experiments exploded 139 seconds into its flight.

But this time, with the rocket’s successful launch and the arrival of its payload to the floating laboratory, Bertelsen knows just what the two species can accomplish.

The genesis of the experiment came from Bertelsen’s interactions with the National Renewable Energy Laboratory (NREL), where he had been involved with its Energy Institute for Teachers. NREL researchers had been experimenting with using an algae species called Chlamydomonas reinhardtii to produce hydrogen. The hydrogen could then be used to power fuel cells. He met with Dr. Alexandra Dubini, at the time a research scientist at NREL working with the algae, and they came up with the idea of trying to replicate successful earth-bound experiments in space. She helped Bertelsen write the grant proposal that secured funds from the Center for the Advancement of Science in Space (CASIS), the organization that manages the U.S. laboratory aboard the space station.

“Our aim,” Bertelsen wrote in a post-mission briefing report, “was to demonstrate that algae removed from the gravitational influence of the Earth would still produce the end products desirable for fuel, namely hydrogen and lipids.”

Bertelsen, who studied aerospace engineering in college, teaches physics and engineering. Despite possessing a broad breadth of knowledge, one hole in his education how to grow algae. Nick Sweeney, a research technician in NREL's National Bioenergy Center, supplied his expertise. He taught the Chatfield students how to grow algae and suggested they also try another species—Chlorella vulgaris—known to make lipids that can be converted to renewable diesel fuel.

The small four-chambered bioreactor the Chatfield students sent into space carried the two strains, while a replicate control experiment was set up that remained on Earth for the same period of time. If successful, C. vulgaris could make lipids, which can then be converted to biofuels. When deprived of sulfur, C. reinhardtii will switch from producing oxygen to making hydrogen. Nitrate starvation prompts C. vulgaris to shift into lipid production mode.

Squares of a special tape that changes color from tan to gray to signal the presence of hydrogen were affixed to the chambers housing the C. reinhardtii. The C. vulgaris loses its greenish hue and turn yellowish as the algae begins to produce lipids. After 24 days in orbit, the samples were frozen and returned to Earth for comparison to algae that remained behind.

Photos taken by a camera that was part of the experiment were examined to determine if hydrogen was produced in space. The tape had turned gray.

“For me this endeavor has been extremely satisfying and confirms to me that the outreach work that we have been doing matters,” Sweeney said. “Working with teachers and high school students has opened my eyes up to the amazing potential in our schools and how CASIS operates.”