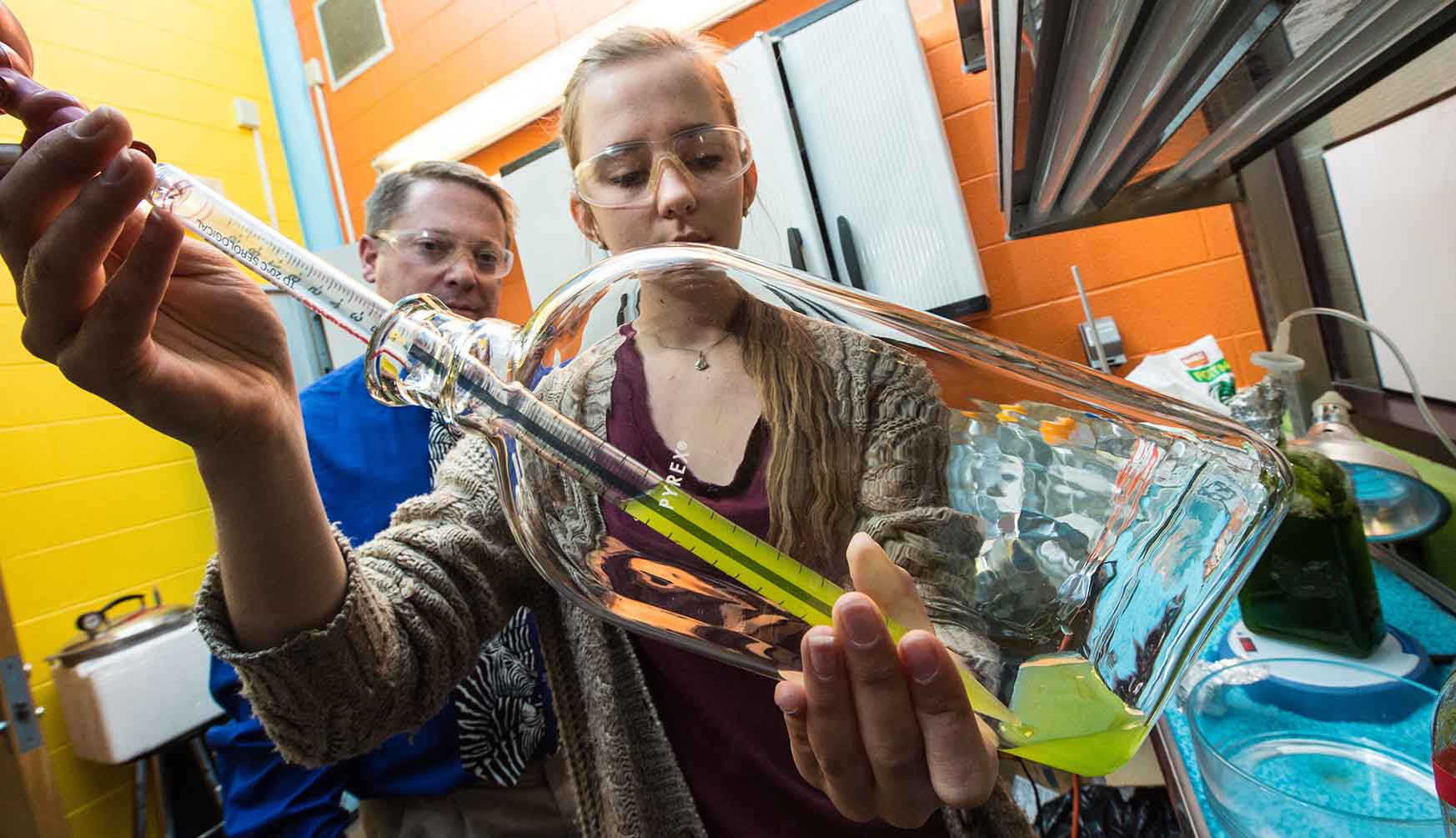 Chatfield High School senior, Dominika Mroz inoculates algae in the school's greenhouse under the supervision of her science teacher, Joel Bertelsen. Mroz and fellow students are preparing an experiment scheduled to go to the International Space Station in May. Their experiment will grow algae in a bioreactor to determine if they can produce hydrogen and lipids in space. NREL researcher Nick Sweeney is mentoring the students and assisting with the experiment. Photo by Dennis Schroeder / NREL

Experiments bear repeating, especially when they explode on their way to the International Space Station.

Almost two years ago, on June 28, 2015, the rocket carrying experiments from Chatfield High School to the orbiting station disintegrated 139 seconds into its flight. That could have put an end to the collaboration between the students and researchers from the Energy Department's National Renewable Energy Laboratory (NREL), but a second-chance flight is scheduled to take off from Florida on May 31.

"I had an inkling we might get to go again," said Joel Bertelsen, a science teacher at Chatfield who bore witness to the failed 2015 launch. "There was hope even then."

Bertelsen will return to Florida with four liters of algae and the scientific acumen developed by both current and former students to make a four-chamber bioreactor. If all goes well, the two experiments it will house will yield results in space similar to what NREL scientists have encountered here on Earth. One strain of algae, Chlamydomonas reinhardtii, will produce hydrogen that can be used to power fuel cells while the other, Chlorella vulgaris, will make lipids.

NREL research dating back to the late 1970s opened the doors to the potential of algae being used as an alternative energy source. That could prove immensely helpful in space, particularly on long voyages when the ability to generate fuel would be critically important. When deprived of sulfur, C. reinhardtii will switch from producing oxygen to making hydrogen. Research has proven that nitrate starvation triggers C. vulgaris to go into lipid production mode, and those lipids can then be converted into biofuels. 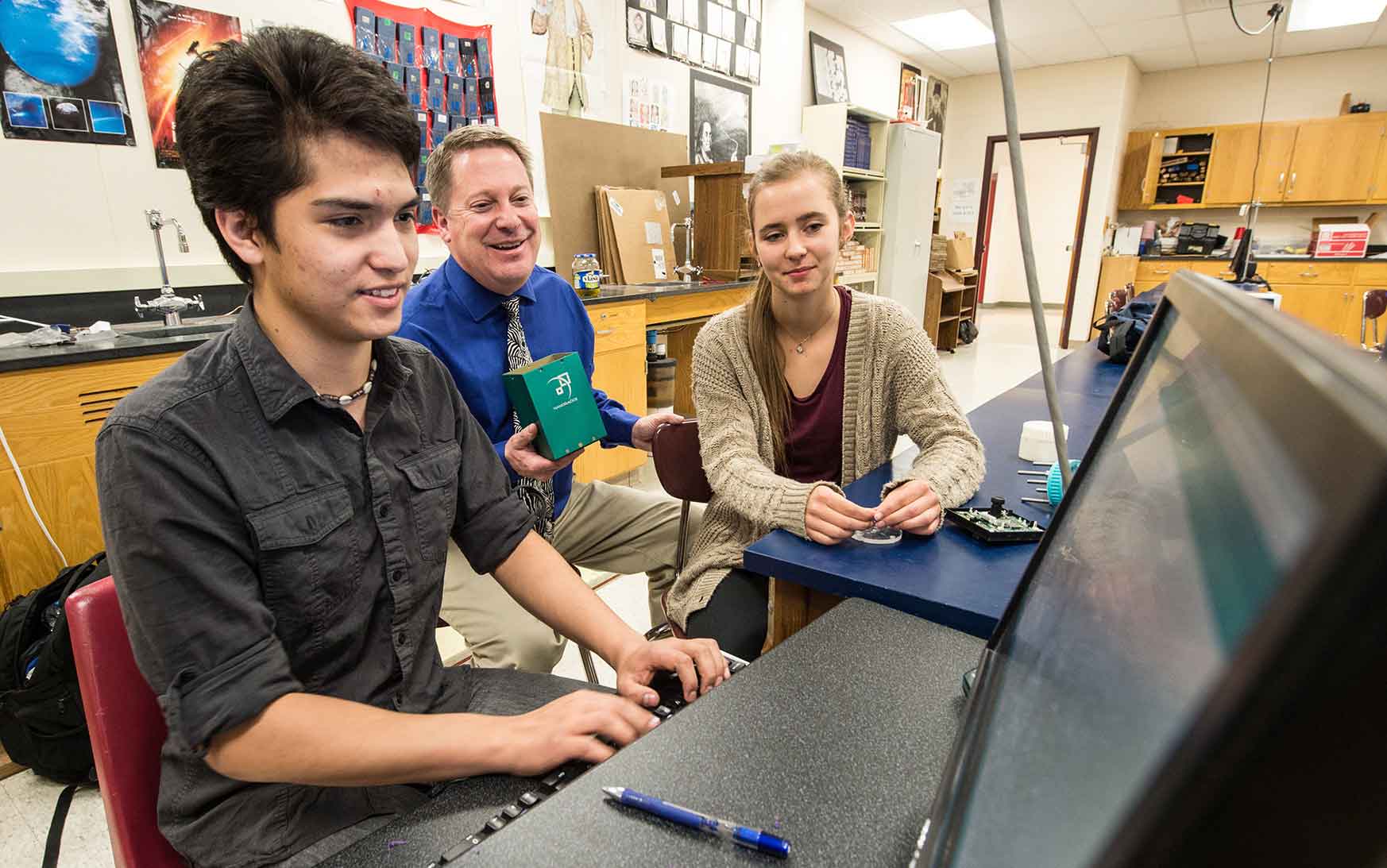 Chatfield High School seniors Dilan Castaneda and Dominika Mroz, along with their science teacher, Joel Bertelsen, work on software code for their algae experiment, which is scheduled to go to the International Space Station in May. The experiment will grow algae in a bioreactor to determine if they can produce hydrogen and lipids in space. The software will control agitation and light, and will also photograph the process. Photo by Dennis Schroeder / NREL

Bertelsen, a science teacher at the Jefferson County school for 23 years, was involved in NREL's Energy Institute for Teachers. He also worked as part of a research team on the Energy Department's Academies for Creating Teacher Scientists, a program for teachers to learn about renewable energy and energy efficiency so that they can incorporate what they've learned into their science, technology, engineering, and math (STEM) lesson plans. When Bertelsen heard about a competition that would send student experiments into space, he reached out to Alexandra Dubini after reading about her work with C. reinhardtii at NREL.

"This lab has been working on hydrogen production for a long, long time, and specifically one condition, which is sulfur deprivation. He wanted to try that," said Dubini, who spent seven years as a research scientist at NREL before leaving the laboratory last year. She's now at the University of Cordoba in Spain. "I said, 'Sure, why not?' So we tried to replicate an experiment we did at NREL to see if that works in space."

Dubini helped Bertelsen write the grant proposal that ended up securing funds from the Center for the Advancement of Science in Space (CASIS). CASIS manages the U.S. national laboratory aboard the International Space Station, and chose Chatfield as the school that would send experiments there.

Bertelsen turned to NREL's staff for a solution to an immediate problem: "How will I grow algae? My background is in aerospace engineering," said Bertelsen, who earned his bachelor's and master's degrees from the University of Colorado, Boulder. "I'm fine with biology, but it was not my forte."

That's where Nick Sweeney's help proved invaluable. A research technician in NREL's National Bioenergy Center Algal Biomass Research laboratory, Sweeney was able to pull strains from about 500 different types of algae. He's the one that suggested the students also experiment with C. vulgaris. He supplied Bertelsen with samples, visited Chatfield, helped design experiments for the students, and assisted in setting up the bioreactor.

"The main thing was to get these engineering students excited about this STEM-type work—get them excited for their college careers," Sweeney said.

Leading up to the original launch, students in Bertelsen's Intro to Engineering class embarked on parallel experiments with the algal strains. When Bertelsen met with CASIS executives in November 2014, he presented their work on the two experiments and said no decision had been made about which one should go to the International Space Station. The reaction? Send both. 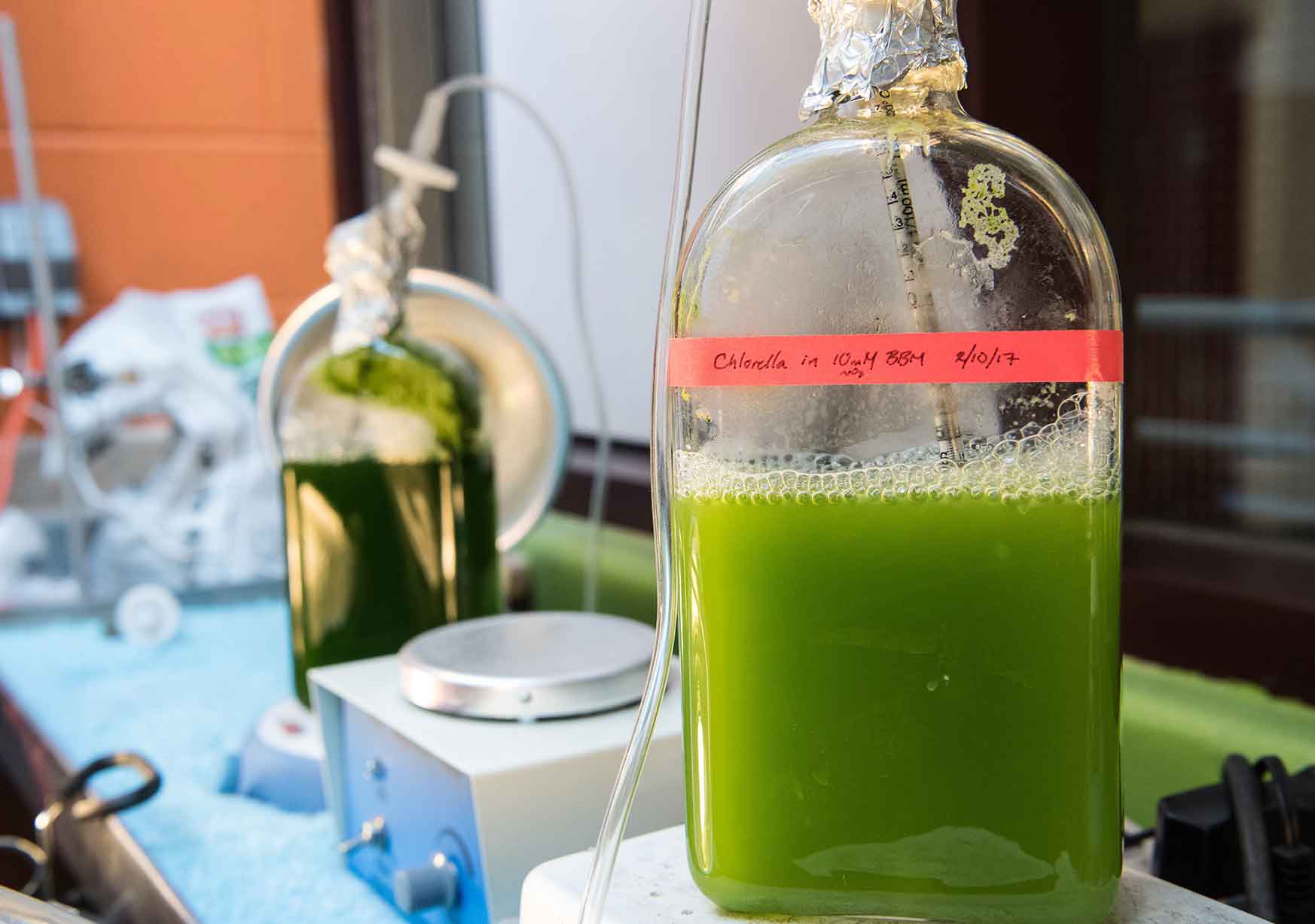 Chatfield High School students are growing algae in the school's greenhouse, preparing an experiment that is scheduled to go to the International Space Station in May. Their experiment will grow algae in a bioreactor to determine if they can produce hydrogen and lipids in space. Photo by Dennis Schroeder / NREL

Students Learn 95% is Not Good Enough

Crucial to the school's experiment was developing the bioreactor. Close enough wasn't good enough. Bertelsen said a typical classroom engineering project requires students to design something, build and test it, and then redesign it to fix any flaws. If the redesign doesn't work, it's time to move on to something else. That couldn't be the case when designing something heading into space.

"One of the things that's been most challenging is coming to the realization that 95% isn't good enough," Bertelsen said. "Having that situation where everything we do has to be 100% is foreign to the students."

Luckily, the students now participating in the experiment didn't have to start from zero—they were able to benefit from their predecessors' work. But while Bertelsen had 26 students involved and an entire class period devoted to the topic in advance of the 2015 launch, today he has just a few students stopping by during their free period or after school. Still, there's plenty for them to learn.

"I learned that there's a lot of thinking that has to go into it," said Dominika Mroz, 18, a senior responsible for growing the algal strains. "You have to be very meticulous. Every step has to be done correctly. And it's OK if you mess up because it's a learning process, for me especially."

Bertelsen teaches physics and engineering in a classroom decorated with posters of the planets, portraits of Isaac Newton, Albert Einstein, and Carl Sagan—and a large photo of a space shuttle launch. A short walk away is a small room where Mroz oversees the algae. Another senior, Dilan Castaneda, also 18, works on a computer in the classroom writing code for the control board that will trigger a camera attached to the orbiting experiments. The camera will be set to take a photo every half-hour during the day.

What will go into space is a small box, 10 cm wide by 15 cm tall. Inside is a four-chamber bioreactor designed to keep the algae spinning, with C. reinhardtii in two chambers and C. vulgaris in the other two. Squares of a special tape that changes color from tan to gray to signal the presence of hydrogen will be affixed to the chambers housing the C. reinhardtii. The C. vulgaris will lose its greenish hue and turn yellowish as the algae begins to produce lipids.

The experiment will last about 24 days, after which the algae will be frozen and returned to earth for comparison to the samples that remained here.

"I won't get my biomass sample for a couple of months," said Sweeney, who has been working with NREL scientist Sharon Smolinski on the hydrogen-producing algae. "It will be interesting to see how much their biomass changes from their baseline. Will there be much of a change? We don't know."