Few scientists reference Kurt Vonnegut in their academic journals, but researchers at the Energy Department's National Renewable Energy Laboratory (NREL) found the parallels between his work and theirs compelling. Both invoke polymorphism—the ability of a material to adopt multiple crystal structures. 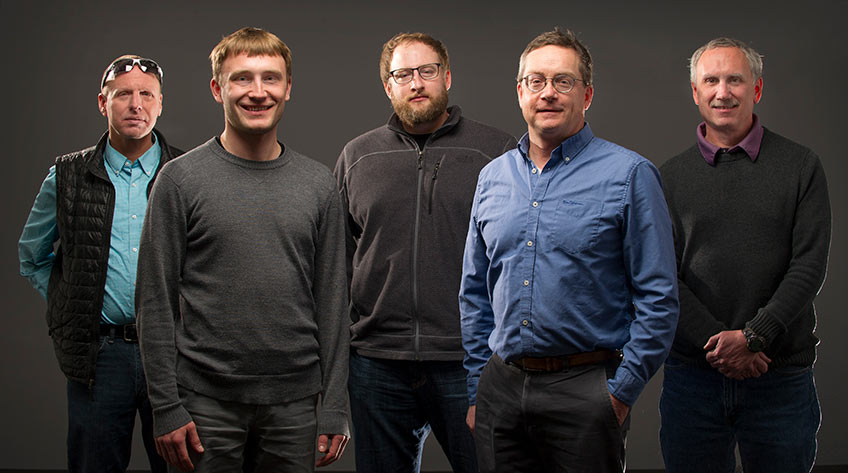 Stephan Lany, Andriy Zukutayev, Aaron Holder, John Perkins and Philip Parilla are co-authors of a paper titled, "Negative Pressure Polymorphs Made by Heterostructural Alloying" being published in Science Advances. The scientists were able to create an alloy with functionalities that don't exist in their parent compounds. Photo by Dennis Schroeder, NREL

In Vonnegut's case, the "ice-nine" he wrote about in "Cat's Cradle" was a solid polymorph of water with a much higher melting point than regular ice. At NREL, scientists are also creating new polymorphs with unusual properties by mixing certain materials together. Prior to this work, it was thought that assembling the atoms into such polymorphs that require tremendous negative pressures would be impossible to achieve.

Published in Science Advances, "Negative pressure polymorphs made by heterostructural alloying" contains both the theoretical understanding and experimental proof of concept that show how such new low-density materials can be made — with unique properties remarkably different from their parent compounds.

"Creating the negative pressure conditions in alloys required counterintuitive thinking, and maybe that's why this has not been pointed out before," said Andriy Zakutayev, an NREL scientist and a lead author of the new paper. His collaborators on the research are Sebastian Siol, Aaron Holder, Lauren Garten, John Perkins, Philip Parilla, William Tumas, and Stephan Lany, all from NREL; James Steffes and Bryan Huey of the University of Connecticut; and Laura Schelhas, Kevin Stone, and Michael Toney from the SLAC National Accelerator Laboratory.

Various polymorphs are routinely made by compressing materials. A classic example is carbon. Usually carbon exists in the form of an inexpensive and soft metal (graphite); by applying enough pressure to graphite it can structurally rearrange to form an expensive and hard insulator (diamond). But expanding the material, under what is known as negative pressure, is difficult.

"It's possible to apply positive pressure to the material by squeezing it, but it's really difficult to un-squeeze the material by applying negative pressure." Zakutayev said. "Think about it this way: you can pack a snowball out of snow, but you can't turn a dense snowball back into fluffy snow."

Building on their pioneering work from last year on mixing compounds with atomic structures that didn't match, the researchers theorized that mixing two different high-density structures would take more energy than forming a third low-density structure — that where the atoms are farther apart. That's because there is less competition for space between atoms in low-density structures. They proved this hypothesis by mixing the high-density forms of manganese selenide (MnSe) and manganese telluride (MnTe) that have different crystal structures — the approach known as heterostructural alloying. The result was a heterostructural alloy, Mn(Se,Te), with a third low-density type of crystal structure that would otherwise require impractically large negative pressure to achieve.

The scientists also discovered the new Mn(Se,Te) alloy is able to generate an electric charge in response to applied mechanical stress, which neither MnSe nor MnTe can do on their own. This may be important for use in sensors and actuators.

"New materials lead to the advancements of future technologies," said Holder, a co-author from NREL who is also an assistant professor at the University of Colorado Boulder. "The properties of this new alloy could lead to its use as a contact layer for solar cells, or for future magnetic memory, thin-film transistors, or thermoelectric devices," added Holder. "But how we made it is even more promising: finding new routes to synthesize materials that nature cannot make would catalyze progress towards next generation technologies."

The research was funded by the Department of Energy, Office of Science, Office of Basic Energy Sciences, as part of the Energy Frontier Research Center's Center for Next Generation of Materials by Design.