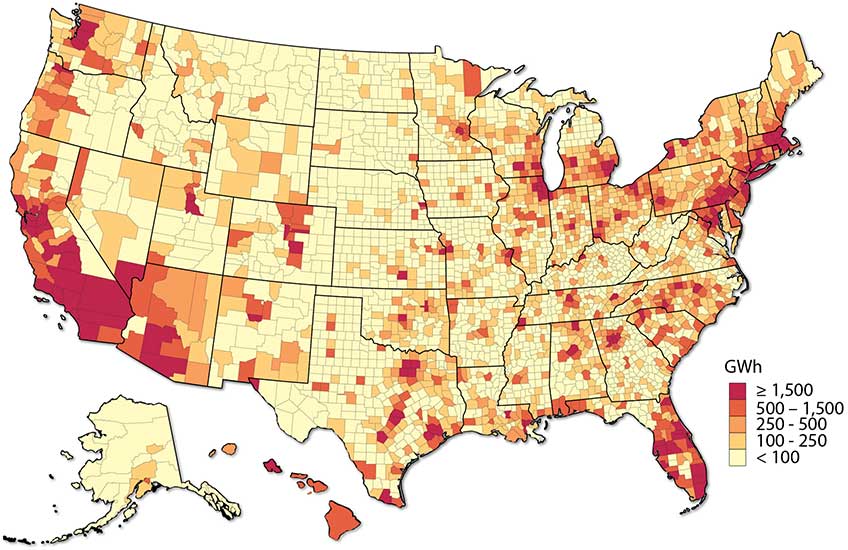 The report breaks down the total potential for solar energy production on the roofs of low-to moderate-income households by county.

A recent report from the U.S. Department of Energy’s (DOE) National Renewable Energy Laboratory (NREL) provides novel analysis on the solar generation potential in low- to moderate-income (LMI) households, demonstrating that rooftop solar could contribute up to 42 percent of all rooftop technical potential in the residential sector, depending on building and roof age, location, and a variety of other factors.

While existing rooftop solar adoption in the U.S. has primarily been concentrated in middle- and upper-income households, falling technology costs and market expansion are enabling access by previously underserved market segments. To further enable this access, some states have adopted innovative incentive and financing programs targeted to LMI residents. While Census data has provided an understanding of the share LMI households in the U.S. (approximately 43 percent), this analysis reveals for the first time two other important attributes of these households: the proportion living in buildings suitable for rooftop solar and the share of their total electricity need that could be met through rooftop solar.

The report, Rooftop Solar Technical Potential for Low-to-Moderate Income Households in the United States, presents a new data set, integrating the estimated rooftop solar technical potential of residential buildings with census tract statistics by income, building type, and tenure. The report is accompanied by a web application that enables users to assess solar technical potential for their communities. This tool makes it possible to visualize the amount of low-income solar potential in a specific neighborhood, for example, while also enabling identification of neighborhoods with both high solar potential and high electricity costs where rooftop solar could provide cost-effective electricity generation.

“We designed the study and associated tool to provide quality, objective data to help inform the decisions of all key stakeholders,” said NREL researcher and report author Benjamin Sigrin. “The findings can help communities make informed decisions that best meet their needs as they address long-term solar adoption targets across demographic categories and building type.”

Sigrin and fellow NREL researcher Meghan Mooney applied cutting-edge data analysis techniques to U.S. Census Bureau and newly acquired data from 128 U.S. cities for this study. With the assistance of Light Detection and Ranging (LiDAR) scans—lasers that work like echolocation to emit pulses of light and measure return time—the team mapped rooftops of LMI and non-LMI buildings in sample cities and developed an identifying footprint. NREL’s PVWatts tool simulated the energy generated based on each roof’s unique characteristics. These simulation results were merged with socioeconomic and building stock data from the U.S. Census to gain a better understanding of solar technical potential across building types. Finally, the team developed a statistical model to estimate rooftop potential for the rest of the country.

Based on this analysis, the report estimates that rooftop solar technical potential for the entire residential sector is about 1,000 terawatt hours of generation, or about 75 percent of current residential electricity consumption. The report also finds that rooftop solar can significantly contribute to the achievement of long-term solar adoption targets, such as those set by states and city governments, though to do so requires deployment on multi-family and renter-occupied buildings. However, traditional deployment business models have not sufficiently enabled access to rooftop solar for LMI income groups and building types. The report analyzes alternative solutions to increasing solar access, such as oversizing PV systems on buildings owned by nonprofits—such as schools and houses of worship—to share energy generation with nearby households.

“Understanding the potential size of the LMI market in detail offers new insights and opportunities to serve these communities,” Mooney said. “The potential electric bill savings from the adoption of rooftop solar would have a greater material impact on low-income households compared to their high-income counterparts.”

GRID Alternatives, a nonprofit organization committed to bringing solar to communities that would otherwise not have access, provided consultation to NREL on this project. GRID’s experience in low-income solar program implementation and development provided real-world context to ensure that the technical potential assessment would be relevant to both solar providers and policymakers. In addition, GRID’s program data provided researchers with a critical understanding of existing national low-income solar deployment. In the next phase of the project, GRID will work with the research team to identify approaches to lowering costs associated with customer acquisition and to address other barriers to increased adoption in the LMI market.

“Solar can have tremendous benefits for low-income communities in addition to diversifying and de-carbonizing our national energy mix,” said Tim Sears, chief operating officer for GRID Alternatives. “We hope this research will give more states the data they need to develop effective low-income solar programs and build a more equitable clean energy economy.”

The report’s authors will be hosting a public webinar on May 1 from 11 a.m. to noon to discuss the report and its implications.