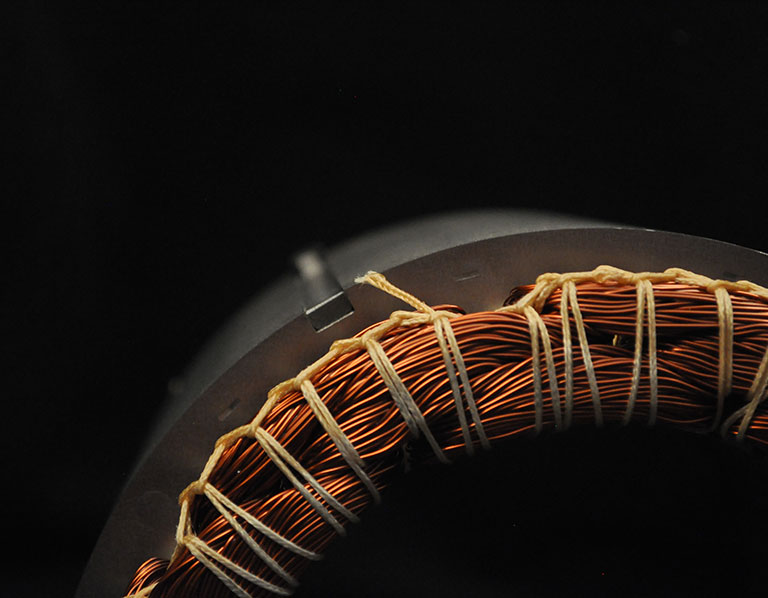 NREL's study of the anisotropic thermal conductivity of packed copper used in electric motors is helping to improve the performance and reliability of electric-drive vehicles.
Photo by Kevin Bennion, NREL.

A recently completed NREL study of the anisotropic thermal conductivity of packed copper wire for electric-drive vehicle (EDV) motor applications provides a baseline for the assessment of new materials and winding structures. Improved thermal management of windings in electric motors makes it possible to maximize operational efficiency and longevity and reduce component footprint, allowing manufacturers to meet consumer demands for high-performance, reliable, and long-lasting EDVs. NREL and Oak Ridge National Laboratory (ORNL) teamed together on the project and published their findings in the ASME Journal of Thermal Science and Engineering Applications.

First, let's define anisotropy: think of it as when a physical property has different values depending on the direction of measurement. An example is wood, which is quantifiably stronger along the grain than against it.

When researchers evaluated packed copper wire windings used in vehicle applications, they were found to have anisotropic properties, with distinctive differences between their parallel and perpendicular measurements. The thermal conductivity proved to be over two orders of magnitude higher in the direction parallel to the wires than in the perpendicular direction, for a wire packing efficiency of approximately 50%.

Researchers examined 670- and 925-μm-diameter varnish-impregnated copper wire specimens with an insulation coating thickness of 37 μm. For this study, a Kanzaki model and a finite element analysis (FEA) model were developed and found to reasonably predict the apparent thermal conductivity perpendicular to the wires. The FEA model used a closed pack wire pattern, while the Kanzaki method used an open pack, or square wire pattern.

The low k_app values in the perpendicular direction indicated the copper wires were isolated and did not significantly affect heat conduction in this direction. On the other hand, heat conduction parallel to the copper wires showed the wire had a significant impact. This supports the expectation that increasing the thermal conductivity of both the wire-insulating coating material and the material in the interstices can significantly increase the apparent thermal conductivity perpendicular to the wire orientation in packs of aligned copper wire.

These test results provide a valuable baseline for comparing new materials, and for highlighting methods for examining the thermal impact of new materials for winding structures relevant to motor applications. This ongoing study will help manufacturers and researchers design high-performance, long-lasting motors for EDVs.