NREL, NASA, and UCL Team Up to Make Lithium-Ion Batteries Safer on Earth and in Space 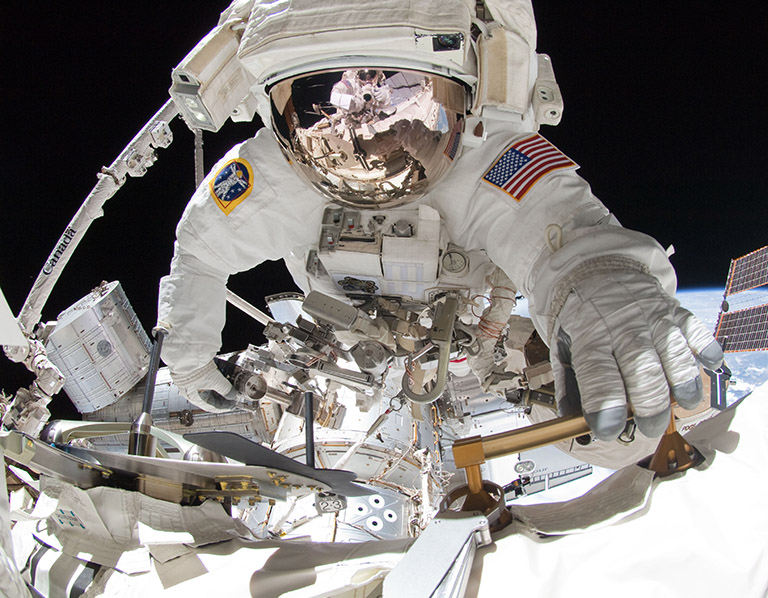 Space explorers' very lives depend on the reliability of Li-ion batteries used to power everything from communications systems to lights and breathing apparatus. NREL joined forces with NASA in finding new, more precise ways to trigger internal short circuits, predict reactions, and establish safeguards in the design of battery cells and packs.
Photo courtesy of NASA

NREL's energy storage team has teamed up with the National Aeronautics and Space Administration (NASA) and University College London (UCL) for a cutting-edge study on lithium-ion (Li-ion) battery failure right down to the cell level, using the lab's newly patented, R&D Award-winning Battery Internal Short Circuit (ISC) Device. A clear, in-depth understanding of what causes destructive, internal short circuits will set the stage for improved manufacturing processes to make these popular batteries safer in all applications.

Because Li-ion batteries are lightweight and have a high storage capacity, they are ideal for use in everything from home electronics, including cell phones and laptops, to electric drive vehicles (EDVs), to technology used by NASA for space travel. However, safety risks can be posed by their potential to overheat and go into thermal runaway, which can result in fire, and in rare cases, explosions. Although catastrophic failure is extremely rare, recent high-profile cases, including the recall of Samsung's Galaxy Note 7 smartphone line and the grounding of an aircraft fleet, highlight why it's important to understand battery failure.

Although it is not a common occurrence, a Li-ion battery can short circuit as a result of a defect, such as a foreign particle entering into a cell during the manufacturing process, which can trigger thermal runaway. This is where the genius of the Battery ISC Device comes in. The device allows researchers to simulate and then pinpoint battery failure right down to the cathode and anode materials, making it possible to identify and then mitigate production issues and build fail-safes into batteries to avert destructive short-circuit failures. The Battery ISC Device is a tiny and implantable apparatus that can be positioned at any specific location within a battery to accurately simulate a true internal short circuit.

Researchers at UCL, NREL and NASA not only studied short-circuit failure inside a battery cell in real time, but they also recorded it with ultra-high-speed X-ray imaging to examine thermal runaway as it spread in the blink of an eye.

"The images from UCL allow us to pinpoint how an internal short circuit progresses within a battery," said Matthew Keyser, NREL senior engineer and one of the inventors of the Battery ISC Device. "These investigations give us insight into how safety mechanisms incorporated into the cell affect its abuse tolerance and gives us the opportunity to design battery cells and to minimize the potential of cell-to-cell propagation within a module or pack."

This breakthrough will be especially important for EDVs as they gain ground in the marketplace, safety for astronauts as advancements are made in space travel, and home electronics that consumers can trust.

Read more about the NREL, NASA, and UCL study.