The Future of Distributed Wind in the United States: Considerations for Unlocking Terawatt-Level Potential

The U.S. federal government has set a goal of 100% clean electricity in 2035 and a net-zero carbon economy in 2050. To achieve these ambitious targets, all forms of renewable power will be important—including distributed wind.

Distributed wind can be placed in behind-the-meter applications, where the system directly offsets a specific end user's consumption of retail electricity supply, or in front-of-the-meter applications where the system is interconnected to the distribution network and provides community-scale energy supply while bolstering the robustness, reliability, and resiliency of the local distribution network. Distributed wind installations can range from a less-than-1-kilowatt off-grid wind turbine that powers telecommunications equipment to a 10-megawatt community-scale energy facility.

From 2003 through 2020, over 87,000 wind turbines were deployed in distributed applications across all 50 states, Puerto Rico, the U.S. Virgin Islands, and Guam, totaling 1,055 megawatts in cumulative capacity. Iowa, Minnesota, Massachusetts, California, and Texas lead the country with the most distributed wind capacity currently installed. As more communities come to understand the role that distributed energy resources could play in their own energy transitions and seek their environmental, economic, and social benefits, distributed wind could play a unique role in the future U.S. grid.

But the right conditions must exist to realize the opportunities for distributed wind.

For both the 2016 and 2022 studies, NREL used its Distributed Wind (dWind) model—a module within the Distributed Generation Market Demand (dGen™) model suite. This year, NREL added new, higher-resolution data and modeling capabilities to dWind to expand on the 2016 study. Notably, dWind now includes real-world dimensions from a data set of 150 million parcels of property in the United States to size turbines for those locations. NREL also improved dWind to consider front-of-the-meter wind systems. The model will be open sourced as part of dGen later this year.

"The potential of distributed wind projects can vary widely with local conditions, so it's important to study it at the most detailed level," said Kevin McCabe, NREL analyst and dGen developer. "Our study is one of the first demonstrations of parcel-level distributed energy resources analysis and advances wind economic and technical potential assessments with unprecedented resolution. With this new level of detail, we can identify trends by land-use type, end-use sector, and geography."

With these new modeling capabilities, dWind can now explore more community-scale distributed wind applications that could participate in the wholesale electricity market and a broader array of payment schemes. NREL modeled future scenarios with a variety of distributed wind system sizes in behind-the-meter and front-of-the-meter applications for specific land-use types, focusing on agricultural, commercial, and industrial areas.

Consistent with the 2016 study, NREL finds U.S. distributed wind has abundant economic potential, or the potential that would have a positive return on investment. Entire regions of the country could profitably provide hundreds of gigawatts today if deployed. In 2035, terawatts of capacity could be possible. 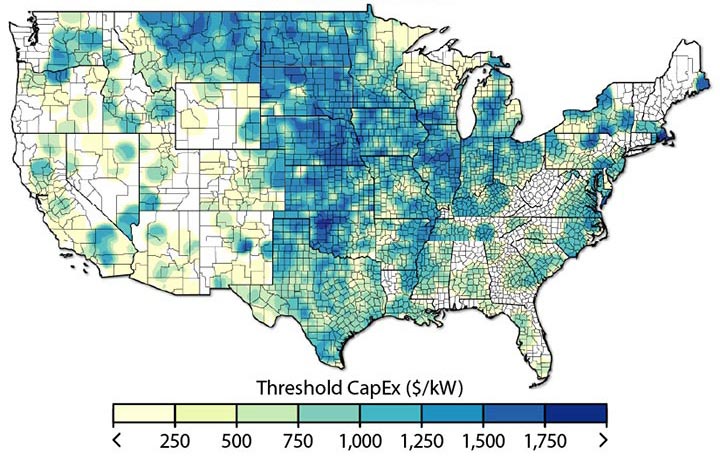 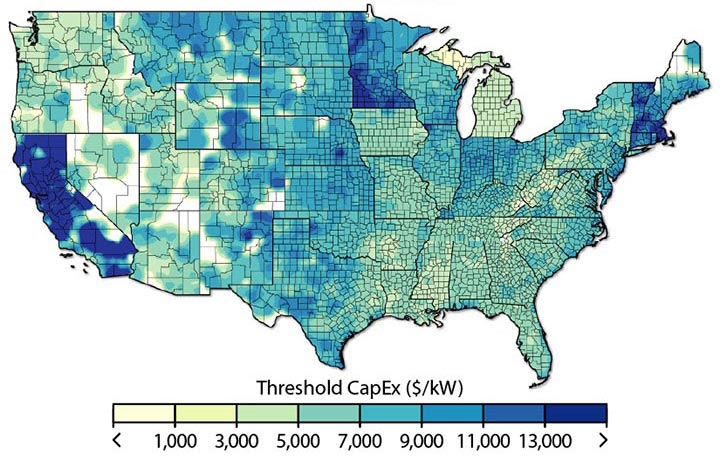 States across much of the Northeast as well as California have lower quantities of profitable distributed wind potential, but there are select locations with significant wind resources, which when combined with generally higher retail electricity rates in these regions means there are compelling opportunities in there too.

Some communities have long endured the negative aspects of energy and climate change and face more barriers to accessing clean energy. On-site energy generation, like distributed wind, could help reduce this inequity by extending the benefits of clean energy to more communities.

NREL modeled the technical and economic potential of distributed wind in parcels of property in communities with high risk to environmental hazards and/or high proportions of low-income households.

"With continued efforts to reduce cost, improve performance, and think more broadly about solutions to deployment, distributed wind could empower communities across the United States to transition to clean energy," Lantz said. "Taking steps to help realize the potential of distributed wind will be especially important in future scenarios with a lot of wind energy, as envisioned under economy-wide decarbonization. In those scenarios, distributed wind's ability to fit specific niches and provide local electricity supply could advance the nation's ability to use wind energy."

View the recorded webinar to learn more about findings from the Distributed Wind Futures Study.