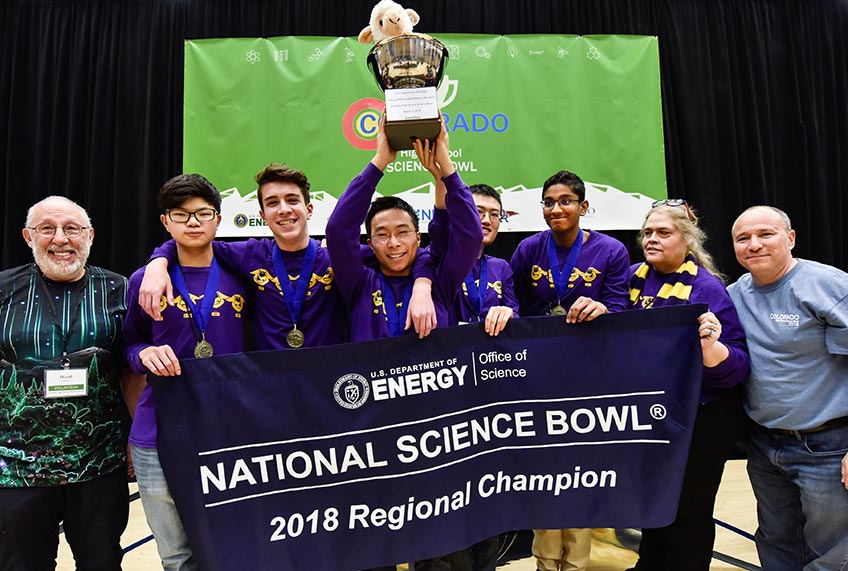 Fort Collins High School celebrates its second consecutive victory over other student teams from around the state in the Colorado High School Science Bowl, sponsored by the U.S. Department of Energy and held at Dakota Ridge High School in Littleton, Colorado.

An experienced hand at the buzzer proved to be the formula for success at this year's Colorado High School Science Bowl—hosted by the U.S. Department of Energy's (DOE's) National Renewable Energy Laboratory (NREL)—where 41 teams from across the state competed for a shot to represent Colorado at the DOE National Science Bowl® in April. The teams worked tirelessly through the morning's round-robin competition, 16 of them advancing to the afternoon double-elimination.

After a full day of answering rapid-fire questions in biology, chemistry, energy, mathematics, and physics, as well as earth and space science, last year's champions from Fort Collins High School squared off against Boulder's Fairview High School in the final round. The Fort Collins Lambkins—undefeated throughout the day—scored a convincing victory over Fairview to claim their second consecutive Colorado championship. Cherry Creek High School from Denver rounded out the top finishers, earning the third-place trophy. 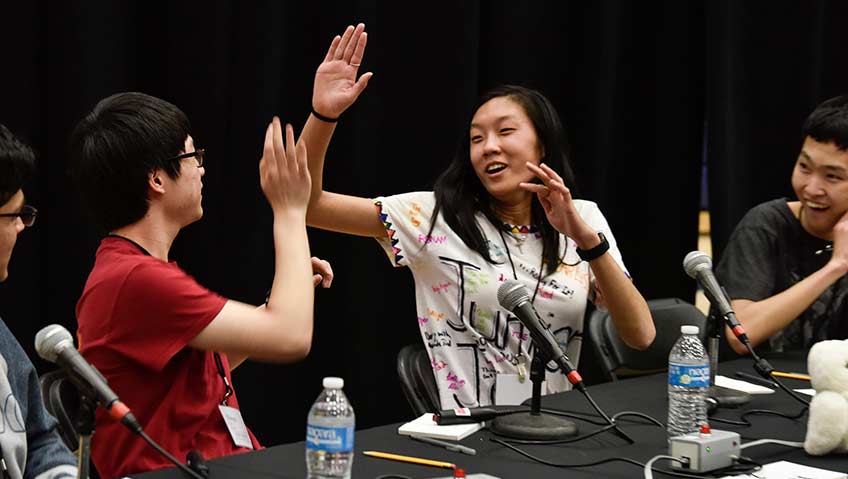 Members of the Fairview High School team from Boulder, Colorado, celebrate after a correct answer during the finals at the 2018 Colorado High School Science Bowl, sponsored by the U.S. Department of Energy. The event took place at Dakota Ridge High School in Littleton, Colorado. Fairview went on to take second place at the competition.

"We're proud of how we did here today," said Lambkins co-captain Nathan Sima. "We worked hard since last year to expand our knowledge, and our efforts paid off for us. This competition is difficult, and you have to work hard at it to succeed."

The team is looking forward to another opportunity to show what it can do at the National Science Bowl, where it will compete against more than 400 students from 70 high schools. "Lots of kids on the other teams also know a lot of science, but our experience in knowing how the competition works and how we need to work together as a team is really important, too—and every time we have a chance to compete we get better at it," Sima said.

While the Fort Collins team was clearly focused on the business at hand at this year's regional competition, they were also enjoying the opportunity to show off their knowledge and network with their peers.

"It's fun to take what we're learning in the classroom and apply it in a competitive format," said Fort Collins team member Henry Cafaro. "Science might seem a little dull in the classroom sometimes, but meeting and competing against all these kids from other schools, who are interested in the same things we are, makes it a lot more exciting."

"Including  the two teams in the finals, each of which had four veterans from last year's Science Bowl, we had experienced participants throughout the competition, with 63 students returning from last year," said NREL Education Programs Manager Linda Lung. "This demonstrates an expanding commitment to science education from both the students and their schools. We're proud that the Science Bowl can play a role in their continued inspiration." 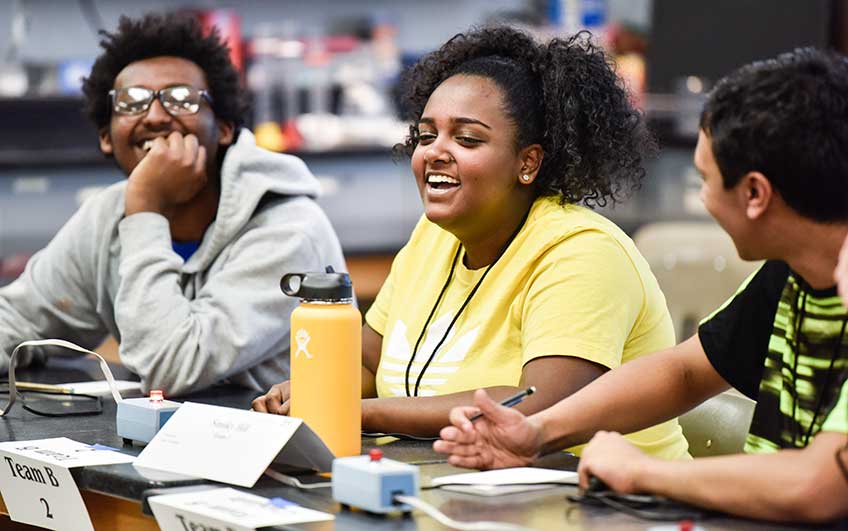 Members of the team from Smoky Hill High School in Aurora, Colorado, relax after a correct answer at the 2018 Colorado High School Science Bowl. Teams from around the state participated in the competition, sponsored by the U.S. Department of Energy. The event took place at Dakota Ridge High School in Littleton, Colorado.

For other students, this year's competition was their first Science Bowl experience. And while they may not have finished near the top of the standings this year, the first-timers were excited by the opportunity to share their knowledge in a competitive format, see how they stacked up against other teams, and have some fun along the way.

"Our entire team is here for the first time and we had a lot of fun with it," said Arapahoe High School team member Ryder Cromar. "We worked really hard to prepare and we learned a lot along the way. I can't wait to take what we learned this year and build on it for even better results next time."

The competitive nature of the Science Bowl brings out the best in the students, and the experience motivates them as they consider their futures, including continued courses of study and potential careers in science, technology, engineering, and math (STEM).

"Science Bowl participation has exposed me to a lot of different science subjects that I hadn't spent much time on, and I learned a lot in the process," said Lakewood High School team member Wesley Linder. "You get to find out not only where you're on the right track with your studies, but also where you need to work harder."

NREL research staff volunteered their time as high school teams from around the state competed in the Colorado High School Science Bowl, sponsored by the U.S. Department of Energy. The event took place at Dakota Ridge High School in Littleton, Colorado.

"This competition is important because it gives these kids a venue to show off their skills in an area that they are excited and passionate about," said Steve Deutch, an analytical chemist in NREL's National Bioenergy Center and longtime Science Bowl judge. "The opportunity to show off what they do well, get some recognition for their hard work, and have some fun helps keep them engaged in science as they advance in their studies."

The Colorado Science Bowl is a labor of love for the NREL staff who help make it happen. Nearly 100 volunteers ensure the competition runs smoothly, and many return year after year to help with everything from hosting the competition sessions to scorekeeping and timekeeping to making sure that hungry minds are well-fed throughout the day for peak performance.

"I like teaching and helping kids learn, so it's rewarding for me to support the Science Bowl," said Lee Jay Fingersh, an engineer at NREL's National Wind Technology Center. "It's important that these students see us, as science and engineering professionals, as supportive role models who are interested in their success. It presents them with something positive that they can strive toward as they seek out their own future career opportunities."

NREL's researchers see their support of the next generation of STEM professionals as crucial to their work and the future of energy. By mentoring students and participating in educational events such as the High School Science Bowl, the research community can help ensure a future workforce to carry forth its mission.

"It's important that we encourage as many kids as possible who have an interest or affinity for science to pursue these fields of study," said Katie Gaston, a chemical engineer in NREL's National Bioenergy Center who volunteers for many of NREL's educational programs, including the Science Bowl. "We need this next generation's best and brightest to come up with the big new ideas for the future."

Learn more about NREL's Workforce Development and Education Programs for students and teachers.