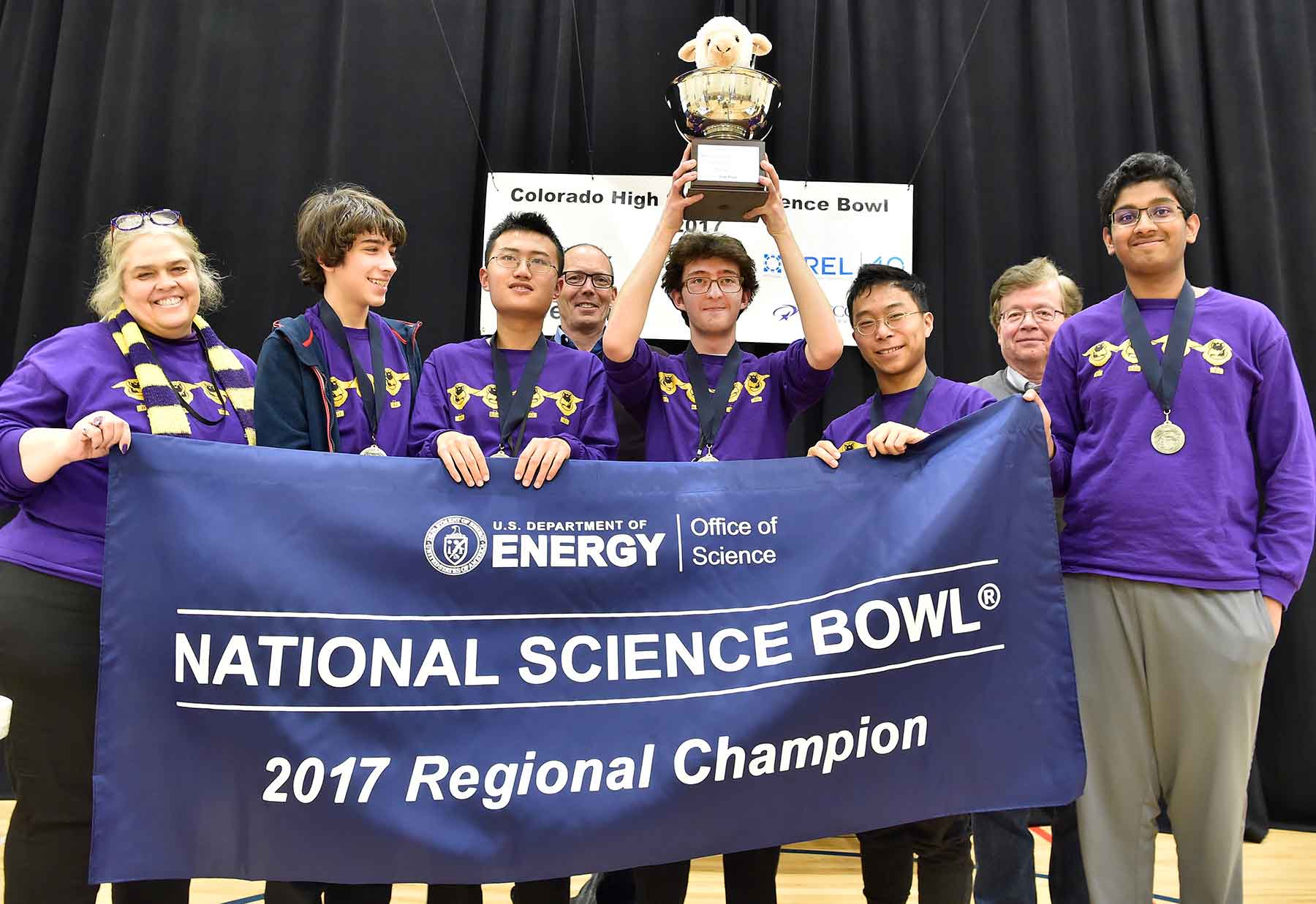 Lammie had a hard time deciding which team to back in the 27th Colorado High School Science Bowl on Feb. 11 at Littleton's Dakota Ridge High School.

The wooly white Lambkin—that is, a small lamb—is the mascot for Fort Collins High School. Through the luck of the draw, the school's two teams were pitted against each other in the first double-elimination round of the competition. As they readied to answer rapid-fire physics, math, biology, astronomy, energy, chemistry, anthropology, and earth sciences questions, members of the first team dutifully passed the stuffed animal down a row of desks to the second team, composed mostly of freshmen.

The second Lambkins team—who regularly practice with the older group answering science questions from Coach Angela Morris—knew what they were up against. One jokingly hoisted Lammie up by the neck with a string—perhaps in hope of staving off the coming onslaught—or maybe in a preview of it. There were a few nervous laughs—but in any case, the gesture didn't help. Then again, nothing could stop senior captain Daniel Scher and teammates Nathan Sima, Larry Chen, Henry Cafaro, and Suhaas Narayanan all day.

From morning until late afternoon, the Fort Collins varsity team handled round after round of questions with (relative) ease. They emerged the sole undefeated team out of 47 in the event, sponsored by the Energy Department, National Renewable Energy Laboratory (NREL), and Verizon.

So it wasn't surprising when, in the finals, Fort Collins cruised to a victory over runner-up and defending champion Ridgeview Classical Charter School, also from their hometown. As Coach Morris beamed, the Fort Collins team hoisted Lammie overhead, cradled in the silver bowl of the first place trophy. In late April, the five students will head to the Energy Department's National Science Bowl® in Washington, D.C., where they will compete against more than 400 students from 70 high schools.

"Our team this year is exceptionally talented and each member is critical to its success," said Sima. "We'll do you proud," Morris assured the crowd.

A Long Way for All Competitors

While high schoolers' weekends are often filled with sporting activities, such competitive options are limited in the academic realm. "We're the only four left at our school not playing sports this weekend," said one member of the first-time team from Soroco, a tiny 100-student school near Steamboat Springs. And though the team didn't make it past the morning sessions, Soroco Coach Janet Peasley found plenty of positives for the novices. "This is a great chance for them to get out there and compete, and to see how others in the world are doing. They don't get the chance very often." Even for these kids, there were temptations. One had to forego a day of skiing to travel down to Littleton. Yet he'd do it again. "I'll come back," he noted.

Everywhere, there were signs of excitement. One team sported bowling shirts—for the Science Bowl. Another dressed head-to-toe in all black. Nervous energy—a very renewable source, it seems—was palpable. Brian Park, a sophomore on one of two teams from Boulder's Fairview High School, was alive with the spirit of competition, hopping around. "This really gets your adrenaline going," he said. Indeed, the Fairview team would need all his pep because one of its stars, team captain Hannah Zhang—who had captured a special award from NREL for her renewable energy project at last year's state science fair—wasn't able to attend. Still, there was hope. "We've won two rounds," Park said. 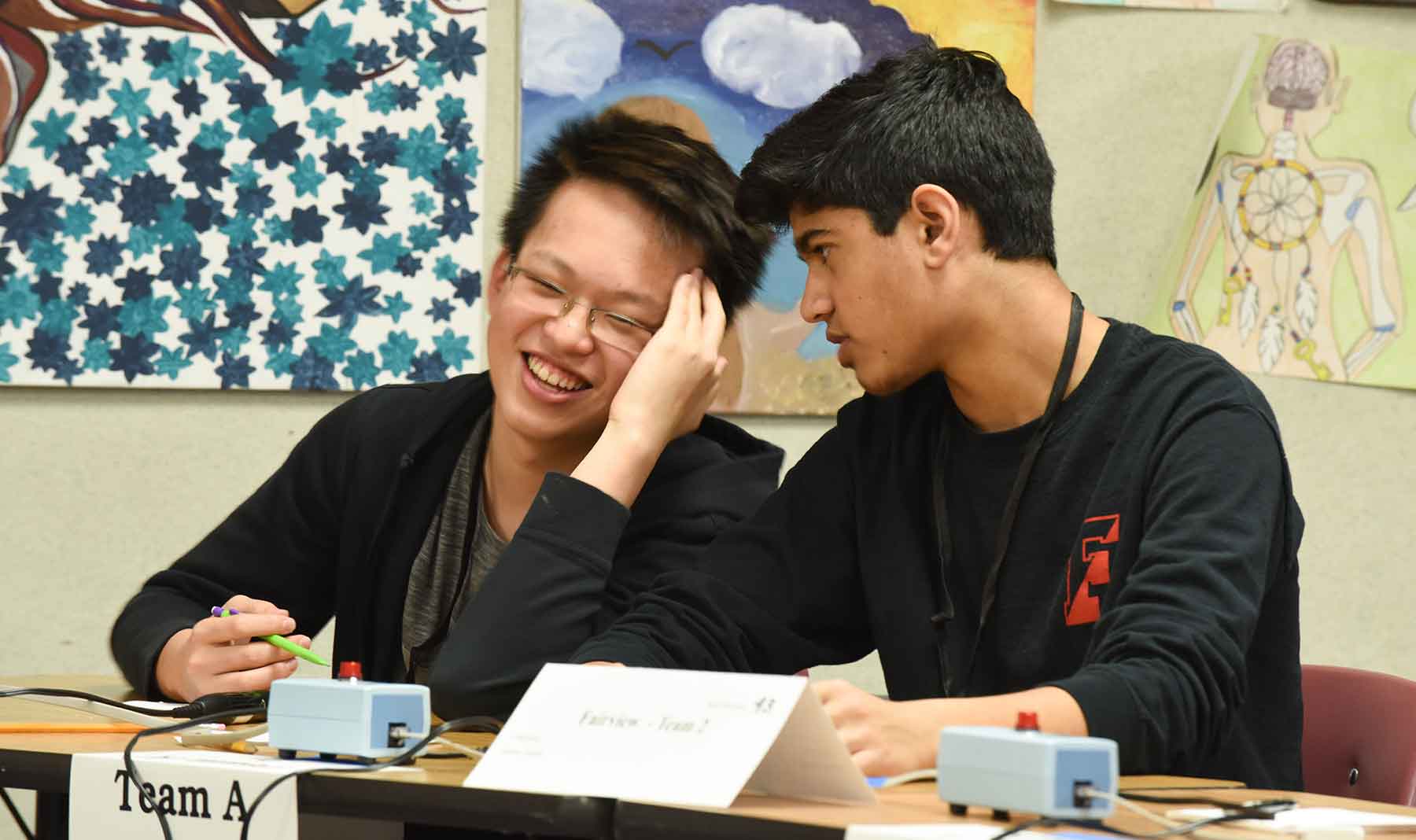 Finding a Way to Sizzle in Science

Not every team wins, of course. And while trophies are nice, there is plenty of value in the quest for scientific knowledge. Teams often begin in September, meeting once or twice a week for one or two hours each session, to absorb knowledge—and get comfortable pressing electronic buzzers quickly to answer questions.

Denver's South High, under Coach Kiley Mack, is a good example. "We gather at lunch once a week and have fun," said Mack, who once did an "internship" at NREL as part of the Academies Creating Teacher Scientists program. In one of the most diverse schools in the state, there are plenty of competing interests. So far, the Science Bowl hasn't gotten as much traction as Mack would like. Still, he has a devoted group, which is an offshoot of his school's STEAM (science, technology, engineering, art, and math) program. "We do things like design rockets and work on computers," he said. The key is to keep students interested. One incentive helped boost performance on Feb. 11: the promise of ice cream if his team correctly answered its first bonus questions. The ploy worked as the South team nailed several bonuses in a row against Eagle Ridge. "Are you proud of us?" asked one exhilarated team member. "I am," Mack replied with a smile.

Another coach, Josh Myatt, who attended NREL's nine-week Science Teacher and Researcher (STAR) program over the summer, was using his knowledge to guide two teams from Lafayette charter school Peak to Peak. "This is great because our kids competed," he said, adding that his STAR experience exposed him to an array of renewable energy technologies he was able to share with his students. Although his teams didn't challenge the top scorers, Myatt was happy with their effort. "They had a chance to show what they can do." 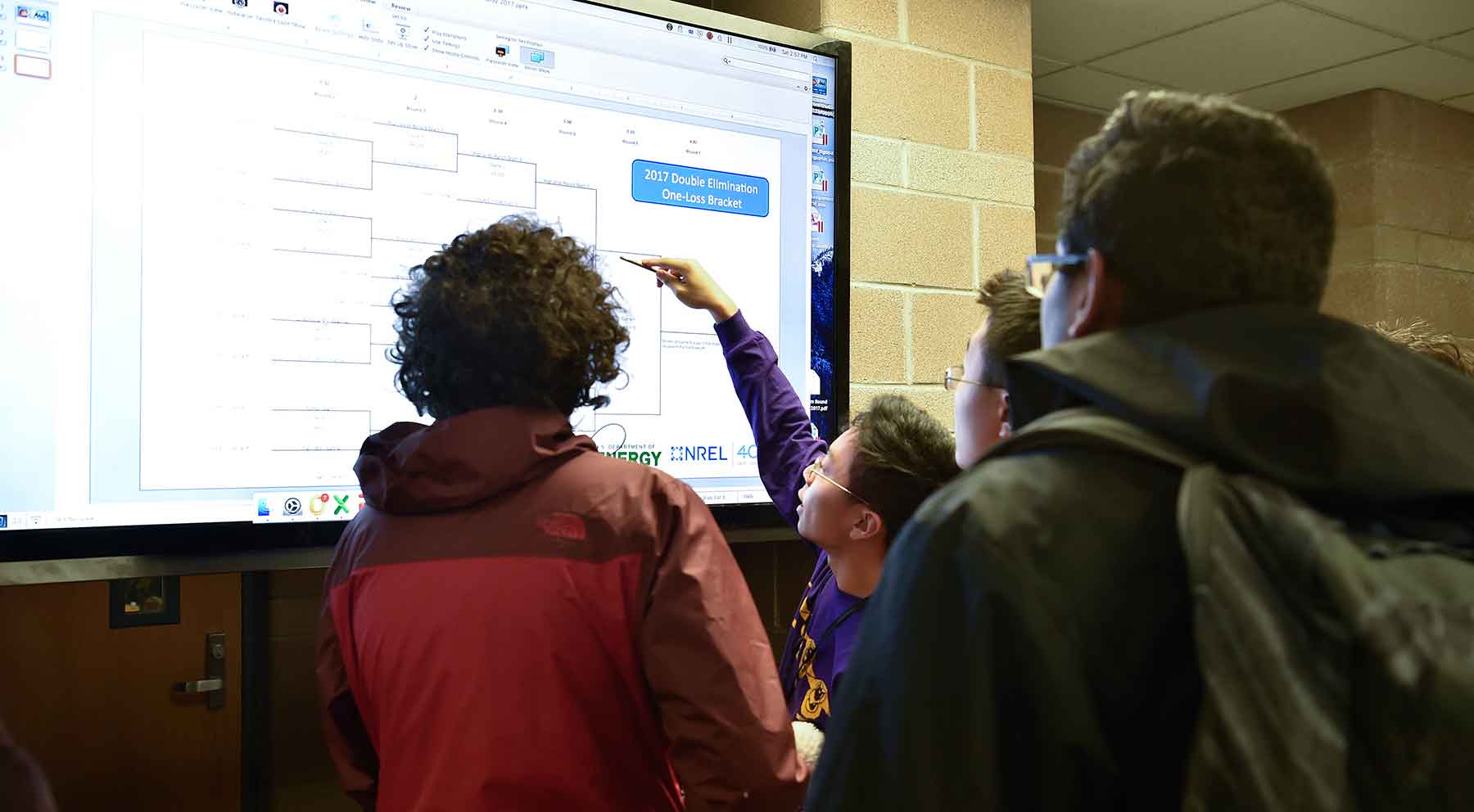 The Teamwork to Produce a Competition

Of course, the students aren't the only ones who are busy. Pulling off a competition involving rotating rooms, timing and scoring, food, and simple record-keeping takes plenty of work. Volunteers helped keep the laser-sharp minds focused on what they do best: answering questions about the likes of Einstein's theories, Hubble's findings, the Heisenberg Principle, and photovoltaics.

Many of the 90 volunteers, young and old, come back yearly. Sometimes it's a family affair. Natalie Carpenter, a seventh grader at D'Evelyn Junior High School, returned along with her older sister and younger brother. Children of NREL researcher Danny Carpenter, all were serving as runners, helping relay scores to competition central manned by Linda Lung, coordinator of NREL's Workforce Development and Education Programs. "It's fun," the young Carpenter said during a break in the action. She enjoys the atmosphere—even if she's not certain she wants to become a scientist. "I might want to do something with animals," she offered. In terms of her assignment, she was well suited. "I like to run," she said—and so, skipped off on a mission.

Others—such as judges, timers, scorers, and science experts—were not so mobile. They had the task of maintaining order in the classrooms designated for contests. The pressure was on—and sometimes, they had to make tough calls. Avi Purkayastha, a researcher in NREL's Computational Science Center, was moderating one match when a question came up about the symbol consumers should seek when looking for energy-efficient appliances. "Star?" came a response. Brow furrowed, Purkayastha conferred with his attending science expert. "Sorry, but the correct answer is 'Energy Star.'" The respondent didn't complain. There would be plenty more questions to consider.

"The competition was tough and these students deserve to be recognized for their academic achievements," Lung said. "As one of the folks that have participated in all 27 years of the Science Bowl, I am always amazed at the high caliber of students that participate in this event. Old schools and new schools—it is a wonderful educational gathering of really smart kids."

The Road to D.C. and Beyond

And then—as already mentioned—the Fort Collins Lambkins roared. Sometimes they conferred among themselves—"Dwarf planet category? Yes? Radioactive decay? Maybe, what do you think?"—at other times, confident individuals bravely buzzed in. Finally, the timekeeper called the match. It was over.

Audrey Tsoi, captain of Ridgeview's team, was gracious in defeat. The senior, who wouldn't get another crack at the title, said simply, "It was fun. And I hope our team does well next year." The future looms. As their coach, Paula Petterson, stressed, "Our goal is to help the middle schoolers."

But for one squad, hope lives on. The Lambkins will be headed east to compete for the national title. While it is too early to speculate on how well they will do, one thing is certain: Lammie will have no trouble picking a team to root for this time.