NREL Connects with the Community—Next Door and Across the Country 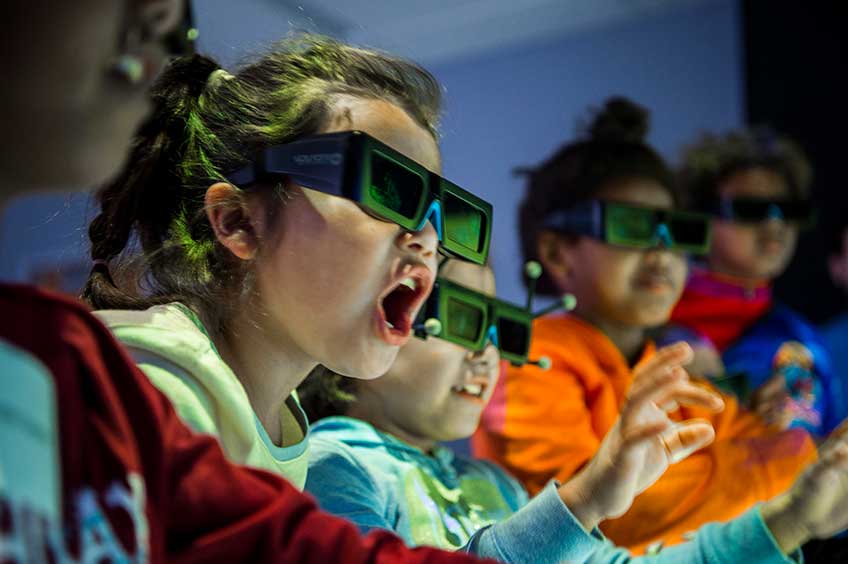 Students enjoy a visit to NREL where they learned about renewable energy and energy efficiency.

Thunderstorms didn't dampen the enthusiasm of visitors at a recent afternoon community open house on the Golden, Colorado, campus of the U.S. Department of Energy's (DOE's) National Renewable Energy Laboratory (NREL) where more than 250 neighbors turned out to tour the site and talk with laboratory staff.

Gianna Crivelli, who had recently moved from New Jersey to Denver, was one of the guests at the event. She was particularly impressed by the iUnit modular house that NREL is validating at its Energy Systems Integration Facility (ESIF). "It's really cool that this is being used in the city," she said, "to know that it's helping provide affordable housing and not just an experiment." And Rick Dahl, a retired State of Colorado accountant who lives in the neighborhood, agreed. "Getting to see the behind-the-scenes work being done here on renewable energy was really great," he said. Others echoed these comments after learning about the latest in energy efficient technologies.

And while this is among NREL's most visible community outreach efforts, it is only one of many connecting the laboratory with people in Colorado and across the country. That's because sharing is part of NREL's DNA.

Laboratory Director Martin Keller has urged staff to "participate in whatever ways make sense…whether it is supporting a charitable organization, volunteering in the community, or coaching a youth team. The key is participation." At the open house, Keller thanked the community for its support, saying, "we definitely appreciate all you are doing for us." Returning that support is part of the reason the laboratory culture is to give back—and through various efforts, NREL is making a difference in the community. 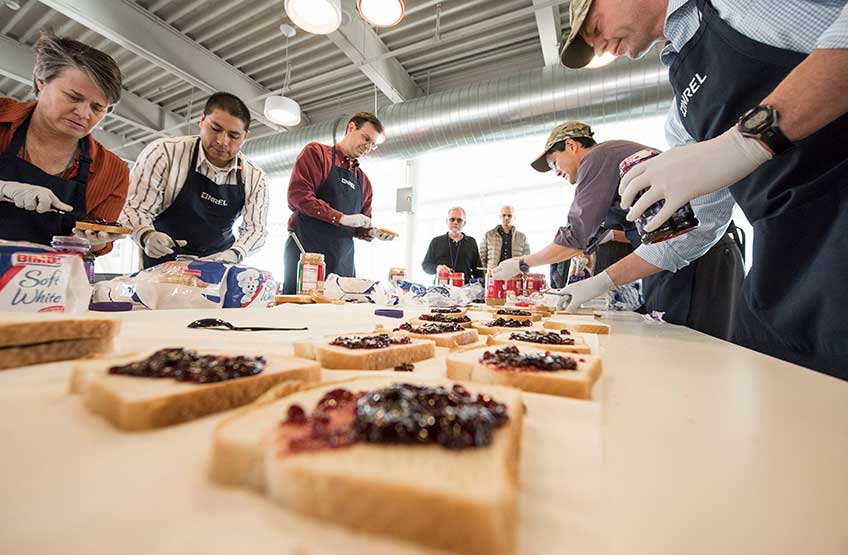 "This incredible impact would not have been possible without contributions from staff, volunteers, and generous donors throughout the laboratory," said NREL Community Relations Team Lead Jill Rhodes. The proof is in the numbers. In fiscal year (FY) 2017, NREL:

These trends are expected to increase for FY 2018, Rhodes said—in part because NREL staff members are always looking for new ways to partner with community and educational groups.

Students Get Foundation in Energy Studies

A significant part of the laboratory's outreach is to help bring STEM information to students and nonscientists. Sometimes, individual schools make requests, as was the case when a Madison, Wisconsin, elementary school requested a remote-learning session for its third graders. NREL Education and Community Outreach Specialist Marcus Giron was glad to help.

"If someone calls, and we have the time to help, we're happy to do so," he said. "We know renewable energy study can be part of a curriculum. We can add to that, helping them understand." The connection went through, and the budding scientists in Madison were able to ask questions. Afterwards, the class sent NREL copies of five essays they'd written on various forms of renewable energy, along with a note from their teacher: "Thank you again, Marcus, for sharing your knowledge with us and for answering our questions. Everyone loved it."

More typical are in-person visits from local schools. Giron and others typically handle around 60 field trips per year at NREL's Education Center, revamped in 2017 to provide a deeper dive in which NREL research is amplified through STEM education. In October, for example, 16 youngsters ranging from 6-12 years old visited from a low-income Denver neighborhood. The students got the chance to test a variety of experimental equipment, including snap-together electrical circuits, model wind turbines, and solar panels.

"This is loud," exclaimed one 10-year-old student as he tested his circuit with a classmate. The noise from the buzzer snap-on wasn't enough, though, so the two students fitted light-up elements into place. Throughout the room, those moments—and the resulting glow—repeated themselves as Giron and volunteers from NREL's Buildings Efficiency program demonstrated renewable energy technologies in miniature.

This visit was part of the laboratory's "Head to Heart" initiative, a chance for NREL experts to share their knowledge with some of the people affected by their research. "It came about as part of NREL's 2017 community engagement strategy," said Rhodes. "The goal of Head to Heart is to make a connection between an NREL research project (or set of projects) and a community engagement or charitable activity and include NREL researchers."

Other times, such mentorship is less formal. NREL Postdoctoral Researcher Joshua Vermaas has found his niche: judging school science fairs. "Prior to my first judging assignment, I had never stepped foot in a science fair, since I never participated in one when I was younger," he said, adding that he's been inspired by the "enterprising young minds" seeking to understand the world.

NREL Postdoctoral Researcher Joan Marcano was among those participating in an energy exploration for students of Hispanic heritage at the Wings Over the Rockies Air and Space Museum in Denver last year. "It was a good chance to connect with them and talk about science," he said—a passion both professionally and culturally for the Puerto Rico native.

In 2015, when local High School teachers and students entered a competition for the chance to send a science experiment into space, a collaboration between the students and NREL researchers was key. Research Technician Nick Sweeney helped the students select and grow two strains of algae for their experiment. He also assisted in designing the bioreactor that would house the algae on the International Space Station, to see if the specimens could produce fuel precursors in a low-gravity environment. The experiment, and the laboratory's involvement, was partly inspired by a teacher's participation in NREL's Energy Institute for Teachers years earlier. This is just one of the ripples of inspiration the laboratory has watched expand from its STEM-education programs over the years.

For example, a seed planted 20 years ago during the annual Middle School Electric Car Competition is blossoming at the Chicago Children's Theatre (CCT) this summer. There, a CCT administrator asked the laboratory to collaborate on a solar-powered "turtle" race inspired by her participation in the NREL model car competition in 2001—creating another ripple of STEM inspiration.

The laboratory also supports education in general for local grade schools. In 2017, NREL donated a book to each of the 288 students at nearby Pleasant View Elementary School, provided 50 volunteer readers for its second-grade Read with Me program, and collected more than 5,000 school supplies for the students. 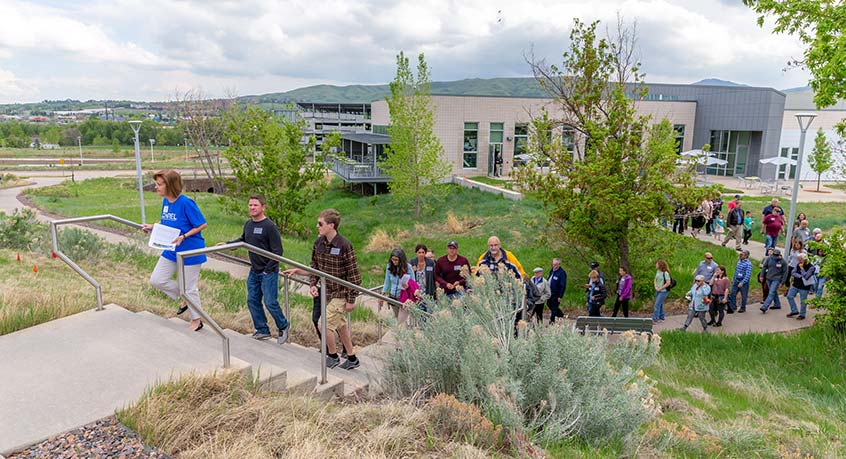 The Many Linkages to Communities

Seeing a group of researchers in Santa hats wielding wrenches might seem odd. But last holiday season, a dozen NREL Fuels and Combustion Science researchers gathered to assemble bicycles for students at a Denver elementary school.

NREL also is an active partner with organizations sharing the laboratory's mission, by strengthening workforce development and fostering partnership opportunities. Nearly 300 community and business leaders have experienced the four-month Executive Energy Leadership Academy, getting a closer look at NREL and its research. And the laboratory participates in local organizations, including the Jefferson County Economic Development Corporation and the Denver Chamber of Commerce.

"NREL's work on behalf of the Golden Chamber and other local organizations not only increases our visibility within the community, it also allows us to provide a key point of view in discussions about the local economy," said NREL Visitor Relations and Program Coordinator Sarah Barba, who also serves as chair of the Greater Golden Area Chamber of Commerce Board of Directors.

NREL volunteers are also active with organizations whose missions and values are parallel to those of NREL. For instance, the American Alpine Club (AAC) in Golden announced the recipients of its 2018 research grants, powered in part by the Alliance for Sustainable Energy, which manages NREL on behalf of DOE. NREL staff from across the laboratory serve on the AAC Research Grant Committee, reviewing all the project proposals submitted for consideration. NREL Subcontract Closeout Specialist Dylan Maher is one of the committee members. "Not only is it a great opportunity to support our neighbors at the AAC, it's also been incredible to see NRELians come together and rally around our mutual love for the outdoors," she said.

Of course, enjoyment of the outdoors makes some of NREL's connections a natural fit. A team of NREL cyclists and supporters has been raising funds for multiple sclerosis (MS) research as part of the annual Bike MS: Colorado 150-mile ride for years. This year, the group—which has raised more than $50,000 for the local chapter of the National MS Society—set an aggressive goal to double that amount. One team member, NREL Electronic Print Specialist Kirsten Trujillo, who has battled MS for 22 years, couldn't be more excited. She plans to clang her cowbell along the route from the northern suburbs to Fort Collins. As many other givers at NREL do, Trujillo pledged, "I can give way more cowbell." 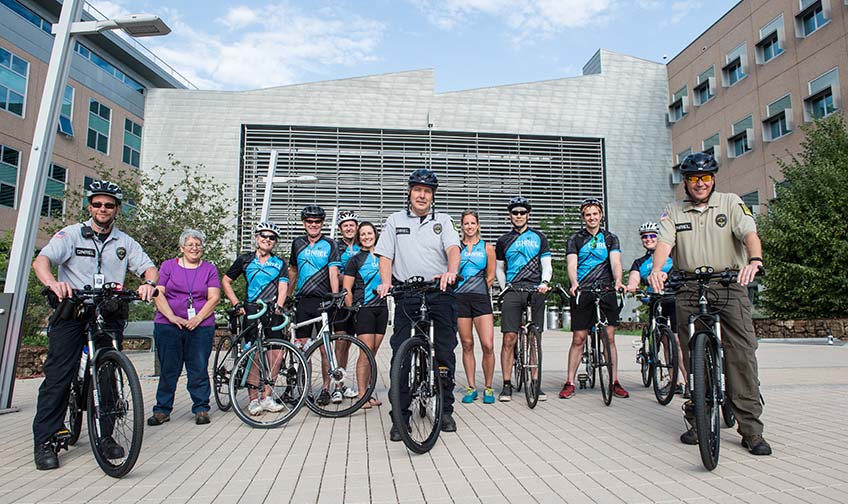 The efforts go on and on: assembling peanut-butter-and-jelly sandwiches for the Denver Rescue Mission to hand out to the homeless; visiting local animal shelters to help provide care to rescued pets; and strengthening ties with a variety of business organizations. Many also reach out on their own. Engineer Doug DeVoto, for example, made a second trip to Nepal last fall as part of an Engineers Without Borders project to build a well for community use.

Barb Goodman, who recently retired as NREL's executive director for Institutional Planning, Integration, and Development—a frequent chairperson of the laboratory's annual giving campaign and a board member for several local nonprofits—summed it up simply. "I have been so incredibly blessed with resources, opportunities, friendships, linkages to people," she said. "I want to be able to share that and give back personally." That's the spirit behind all of this. "Not only are we changing the world through scientific innovation, we're changing the world around us through every community member we reach," Rhodes said.

Learn more about NREL in the Community.