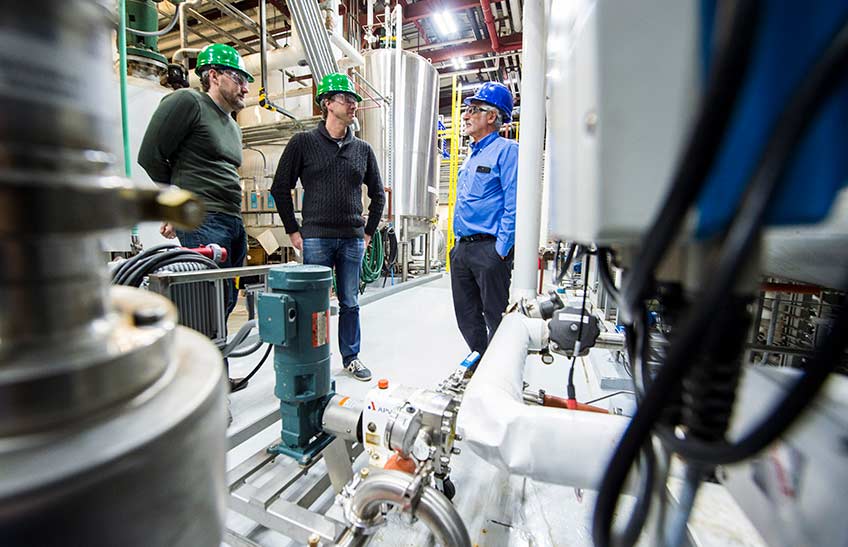 If there's an easier, more efficient method, science will find a way. That's certainly the case in producing cellulosic biofuels, which, at least for now, requires a two-step process to free the sugars trapped in plant matter and convert them into something else. Scientists at the U.S. Department of Energy's National Renewable Energy Laboratory (NREL) think that's one step too many.

Lignocellulosic biomass—a category that includes plant matter such as corn stover and switchgrass—serves as the feedstock to create biofuels, as well as bioproducts currently made from petrochemicals. But barriers exist that prevent biomass from easily surrendering its sugars. Plants are protected by a complex cell wall and, inside that, polymers of cellulose, hemicellulose, and lignin—each of which poses its own challenges that must be overcome for the biomass to be "deconstructed."

"All plants have basically evolved for millions and millions of years to be difficult to turn into sugars," said Roman Brunecky, a senior scientist in NREL's Biosciences Center with expertise in enzymes produced by microorganisms. Enzymes that he and his colleagues identified and engineered have the potential to simplify the production of biofuels and other bioproducts.

A decade ago, Congress put more emphasis on renewable fuels to help protect the nation's energy security, but technical challenges have stymied the efforts of commercial bioethanol producers—until now. Research underway at NREL may hold the key to overcoming those barriers. 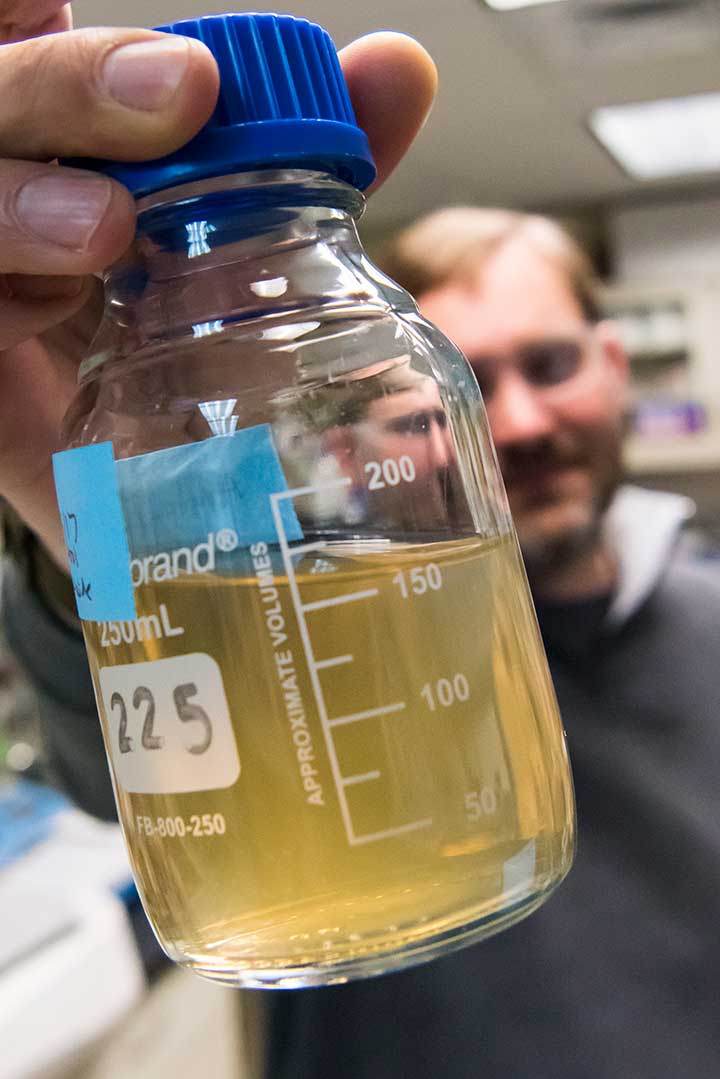 The process normally used to deconstruct biomass, called simultaneous saccharification and fermentation, works like this: The feedstock is pretreated with heat and chemicals to separate and remove lignin and/or hemicellulose components. The remaining biomass is deconstructed by enzymes and the resulting sugars are fed to a microorganism that converts them to ethanol (or another fuel or chemical).

"We are not doing this," said Yannick Bomble, also a senior scientist in NREL's Biosciences Center. "We have a microorganism that does it all."

In a paper published last year, Bomble and Brunecky, along with NREL Senior Research Fellow Michael Himmel, detailed their work with Caldicellulosiruptor bescii, a bacteria that thrives in high temperatures. The microorganism produces an enzyme called CelA, which deconstructs biomass to sugars. The microorganism also converts these sugars into ethanol. The same can be done with another thermophilic microbe Bomble works with, Clostridium thermocellum, which can be found anywhere from soil and compost to herbivores and hot springs. It deconstructs biomass and then feeds on the resulting sugars to make advanced biofuels such as isobutanol or n-butanol.

"This is, in essence, a one-pot process," said Bomble, who studies bacteria and how they break down biomass. The process, called consolidated bioprocessing, bypasses the need for pretreatment or added enzymes. "Pretreatment is expensive. If you can get better and better microbes and enzymes to bypass pretreatment, that's a game changer."

It turns out that CelA is the only enzyme found so far that can break down cellulose fibers regardless of how crystalline they are. CelA also brings other advantages, notably the ability to convert biomass to sugars much faster than competing catalysts. CelA employs a novel deconstruction mechanism. Unlike other enzymes that scrape away at the microfibril surface, CelA digs holes into cellulose.

Despite its successes, CelA does run into barriers. Lignin, which acts like a glue that holds plant material together, poses a big problem. "If CelA binds to lignin, it's just stuck there. It can't move," Bomble said. "When that happens, you lose the enzyme. The more enzymes you lose, the less efficient the conversion. That's the problem we run into with some substrates. That's why we are coming up with strategies to remove that binding-to-lignin characteristic. Preserving the necessary binding to cellulose is something that we're also working on," said Himmel.

NREL researchers are looking into other ways to overcome plant defenses, including using an enzyme called AcCel5A. This enzyme, which comes from the hot-spring bacterium Acidothermus cellulolyticus, weakens biomass by inserting a gene into the plant's genome and then burrowing into its developing cell wall, creating nicks and voids that make biomass deconstruction easier. Scientists who have tried other enzymes found their experiments stunted the growth of plants, but AcCel5A helped NREL researchers avoid that problem while maintaining the amount of important sugars yielded by the plant.

The scientists have had particular success in using AcCel5A with Arabidopsis thaliana, a small flowering plant regarded as a weed because of how quickly it grows.

"By using Arabidopsis, we were able to get a bunch of different generations and tweak things more quickly than we could if we were using corn," said Brunecky, who co-authored a paper on the research last year. "In the course of two years you can get two crops of corn. We had something like eight or nine generations of Arabidopsis in that time. That really enabled us to get a lot more work done."

Like CelA, the AcCel5A enzyme prefers hot temperatures—as high as about 83°C (or approximately 141°F). But at that temperature, the enzyme essentially went into overdrive and attacked the plant too enthusiastically. Limiting its working conditions to room temperature kept the enzyme in an ideal state during plant growth. Later, heating the plant material allowed the enzyme to work more effectively to release sugars locked up in the plant. "This was our initial strategy going into this approach two decades ago," Himmel said.

According to Brunecky, "There are no plans to grow Arabidopsis as a feedstock for biofuels." Instead, the knowledge gained from the research will be used on corn and other plants. "You can generally take what you learn from Arabidopsis and apply it to most other crops," he added. NREL researchers are now working to introduce AcCel5A into poplar. 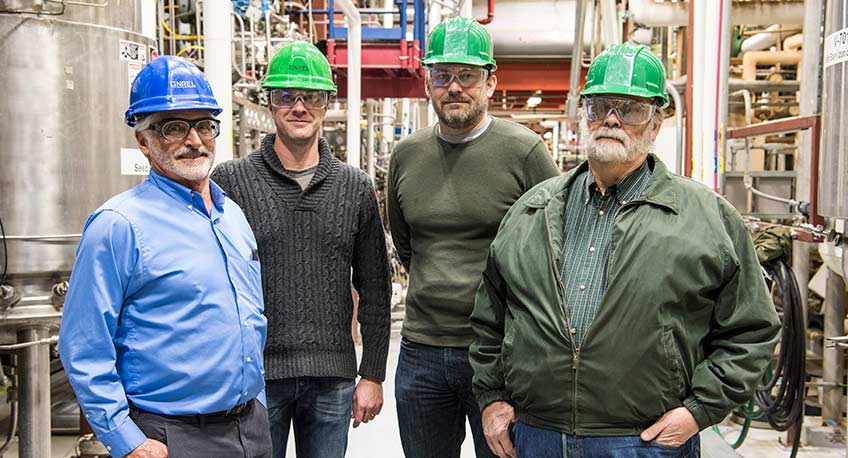 Since a succession of biomass conversion facilities began to open in 2014 in Kansas and Iowa, the lignocellulosic biofuels industry has been facing challenges. Few facilities remain open and able to produce a commercial quantity of cellulosic biofuel. Others are shifting strategies to produce higher-value chemical products instead of fuel.

"We must help ensure that industry is successful," said Himmel, who has worked closely with industry to dramatically reduce the cost of converting biomass into usable biofuels and bioproducts. "We're in a kind of challenging time. The question is, why aren't the new second-generation commercial biorefinery plants functioning as planned? Why aren't they profitable?"

Part of the problem, he said, is bad timing; rising gasoline prices initially accelerated interest in bioethanol, but the cost of gasoline has since fallen. Commercial-scale biorefinery companies have also struggled to find the capital they need to upgrade from their initial process designs. "In some cases, they're using technology that we produced here decades ago, but now it's old technology," said Himmel, a 39-year NREL veteran. A common pretreatment process in use, for example, requires high temperatures and the use of corrosive mineral acids, which mandates expensive pretreatment reactors.

A team led by Melvin Tucker, a biochemist and senior scientist who has worked alongside Himmel for 35 years, developed a better method. He dubbed it deacetylation and mechanical refining (DMR), and it works at a lower temperature (below boiling) and with dilute alkali instead of acid to soften the biomass. A mechanical treatment follows the chemical treatment, and after adding enzymes, yields sugars and lignin.

"It's very similar to what you do when you cook potatoes," Tucker said. "You cook them, you chew on them for a while. There are enzymes in your saliva that start breaking down the cooked starch. Then this mash gets into your stomach, where it's highly acidic, and that chemistry helps break down any remaining polymers. Then, in your small intestine there are additional enzymes that are added to more fully deconstruct the sugars and other food polymers." The lesson is, in nature, both chemical and enzymatic processing steps are used sequentially to degrade complex feedstocks.

The harsh pretreatment processes commonly employed by commercial biorefineries extract cellulose and hemicellulose and leave behind lignin—but not in a usable form. "Conventional pretreatments, where you cook at a high temperature with a lot of acid, condense the lignin down to basically a tar," Tucker said. "There's not much you can do with it except burn it. This new DMR process doesn't modify the lignin very much and you're able to readily upgrade it."

Upgrading involves converting what's available after deconstruction to make another product, such as the fermentation process that turn sugars into bioethanol. NREL has determined that promising opportunities exist to improve the overall economics of biorefineries by producing chemicals from biomass that are now made from petroleum. Lignin from DMR, for example, can be converted to adipic acid, which is a precursor to nylon, polyesters, and other chemicals, and can also be readily converted catalytically to jet fuel.

Himmel said, "The early days of biomass research focused on producing bioethanol. In those times, there was only one target." Now, with so many other possible products from biomass envisioned, greater emphasis is being placed on product formation. That's not to say researchers are entirely ignoring the initial step—how to most effectively break down biomass. "We need to ensure that all proposed biofuel process steps are viable and of reduced (or known) risk," Himmel said.